“The man who moves a mountain begins by carrying away small stones.”
Confucius, aka Kong Qiu (551-479 BC), teacher, politician, philosopher

I’m standing by the kitchen sink.  As I lean over the garbage disposal, I hear a faint clink, metal on metal.  I increase kitchen illumination, look around, see nothing unusual. Something must have gone down the disposal, I think.

I briefly consider unplugging the garbage disposal from the electrical wall outlet.  I appreciate the judicious placement of the wall switch for the disposal such that the average person could not accidentally flip the switch with one hand whilst the other is in the disposal.

Rare but catastrophic accidents can and do occur.

Decades ago a young relative from another country. who was staying with us while he attended school, was working in the college laundry.  He opened the vertical door to a large machine while it was spinning, and was sucked in by the centripetal force.

It had seemed such a small thing: open the door to see what was going on inside.

Several years ago another relative stayed with me for a month.  Over a dinner I observed (and heard) him forcibly crack his neck, much as some people do their knuckles.  He said he did this regularly, ostensibly because of a wry neck. It seemed such a small thing. He had asked a neurosurgeon, who had assured him the maneuver was harmless.

Although disinclined to disagree, I told him that although the likelihood of harm was perhaps small, it could be catastrophic.  I was aware of published/posted reports of patients developing a stroke after neck manipulation that dissected a vertebral artery. 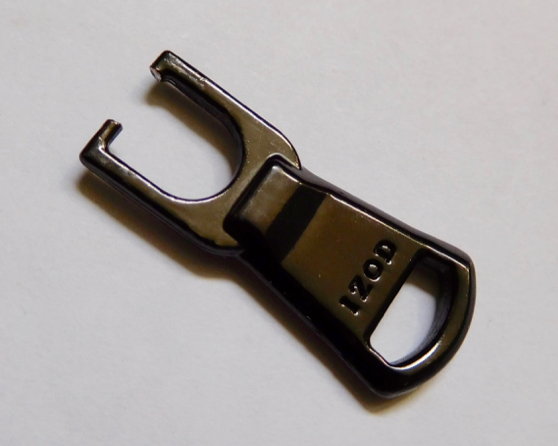 Gingerly, I put my left hand (I’m right handed) into the invisible recesses of the disposal.  I encounter the movable irregular grinding metal parts of the disposal, then touch something that doesn’t belong.  I extricate and examine it.

It looks to be from a zipper.  I check the light fleece jacket I am wearing.  Sure enough, the zipper is missing its pull-tab.  Odd, I think. I wasn’t zipping the jacket when this happened.

Then I remember a phenomenon called metal fatigue.  Not due to rust or obvious damage/trauma, it is a condition of ‘the weakening of a material caused by repeatedly applied loads, a progressive and localized structural damage that occurs when a material is subjected to cyclic loading’  (Wikipedia). Stress causes cracks, first micro-, then macro-.

Stress fractures also occur in certain bones of humans, particularly in the lower extremities of runners/athletes.  Initially invisible on plain radiographs, they may be discernible when later similar imaging demonstrates healing callus.

Bones, in normal individuals, have the capacity to heal.  Metal does not.

A stress fracture in a human is the body’s way of telling its owner that too much stress has been applied to a given structure.  No such warning may occur in instances of metal fatigue, where the first evidence of such may be an aircraft falling out of the sky.

I’ve owned this particular jacket for a few years, but not used it extensively.  The zipper had heretofore been fine.

Upon closer examination, I notice a missing short metal strut that ran perpendicular to one of two longer parallel arms at the opposite end of the tab held by the user.  The other strut was intact. Both arms were designed to hug the part of the zipper which opened and closed it.

I try operating the zipper without the tab.  It is laborious, slow, and largely unsuccessful.

I like this particular not overly worn jacket, and contemplate various options.

I could leave the jacket largely zipped, and operate it as a pullover, as is a similar jacket of different color but similar fabric in my closet.  Doable but not optimal.

I could try to repair the zipper tab.  I have a soldering kit, but the amount of stress applied to the tab when zipping is such that I doubt soldering would work more than briefly, if at all.

I notice a small round hole that runs transversely through the mid portion of the zipper opener/closer which accommodated the short struts. On one side, the hole is clearly visible.  On the other the hole is blocked by broken strut.

I insert an opened metal paper clip into the hole and wiggle it, hoping to dislodge the broken strut.  My force is less than irresistible, but it indeed seems to be an immovable object.

With further manipulation, the paper clip traversed, although it never did dislodge the imbedded broken strut.  Instead, it occupied the tight space between strut and perimeter of hole.

I decide to leave matters as is.  I now have a usable jacket with operable zipper, the latter having an admittedly unconventional zipper (I have modified the paper clip so that it has no sharp edges and may be unrecognizable as to its original intended purpose by a casual observer).

In the big scheme of things, the broken zipper is indeed small.  I’m glad I didn’t turn on the garbage disposal when it contained the tab.  The tab might well have jammed the disposal, although I doubt it would have caused further damage if the disposal had been turned off promptly.

The importance of small things is not to be underestimated.  I have seen an escalator brought to a standstill by a dropped penny.

Lines of a proverb from decades ago come to mind:

It was O-ring failure in a rocket booster that caused the 1986 space shuttle Challenger disaster, wherein 7 persons perished.

The death of my Filipino relative in the school laundry was catastrophic.  It raised many questions, most of which had no satisfactory answers. Its reverberations continue to echo down the narrow but long corridor of familial history.

I don’t know whether my nephew heeded my cautionary words about cracking his neck.

The place spoken of in Holy Writ, most vividly depicted in the book of Revelation, is where there is no metal fatigue.  And I am quite certain the streets of gold (like pure gold here) will not tarnish. It will remain pristine.

My father, a chemist, compiled what he called ‘The Chemical Elements’ chart.  As a boy, I helped him mail the sizable charts in protective cardboard cylindrical tubes to various customers.  There were 92 elements at that time.

There are now 118 chemical elements.  The first 94 occur naturally; the last 24 are synthetic, but valid elements, nonetheless.  And that is just on this planet. Who knows what might exist in other places in the vast universe?

How many might there be in the Earth made new?

One day no one and no thing will fatigue.  Most of us now spend between one quarter and one third of the hours in rest or sleep.  There will come a time when that will no longer be the case, for there will be no need.

And, incidentally, no need for jackets, zippers, laundry machines, and no wry necks.

For the former things are passed away, and of them there will likely be a dim, if any, memory.

My Day with Kinship