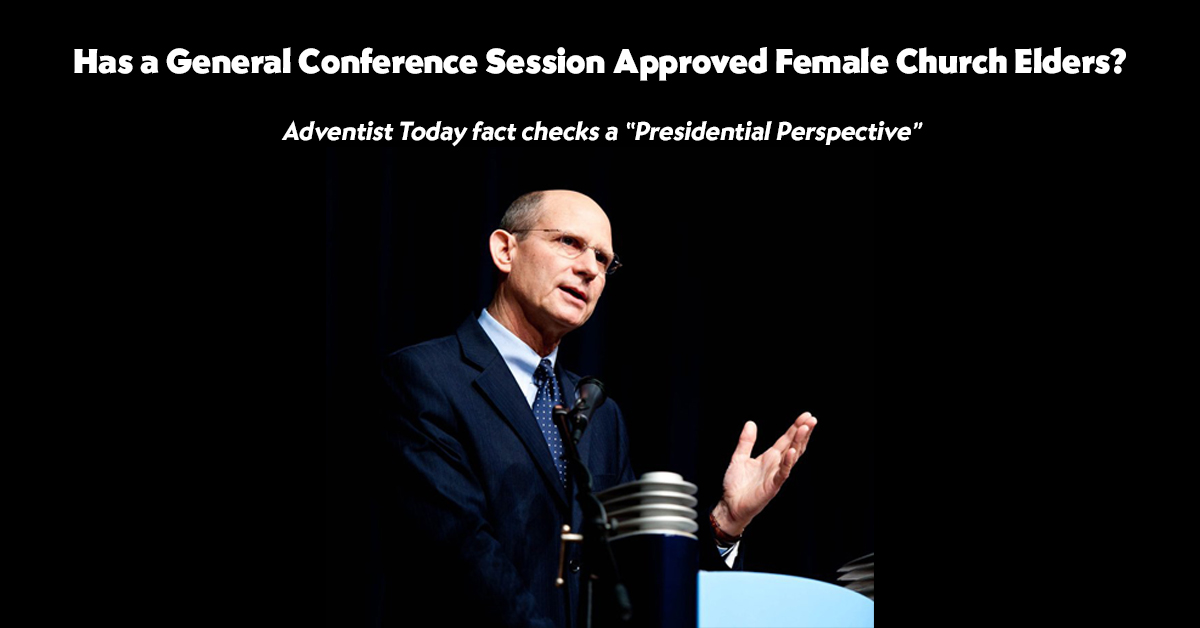 At the request of readers, Adventist Today has researched a statement on the General Conference website dated 17 November 2017 and published in the “Presidential Perspectives” section of the official GC website. It was published under the byline of Elder Ted Wilson, the president of the General Conference, answering a question from “Ian.” Ian asks, “Has the ordination of women as local church elders ever been approved by the General Conference in full worldwide session? Is it provided for in the Seventh-day Adventist Church Manual?”

“The specific topic … has not been brought to the worldwide representative delegates at a General Conference Session,” replies Elder Wilson.

In fact, minutes of the 1990 GC Session, on page 938, reveal that during the afternoon meeting on July 12, General Conference delegates in Indianapolis voted 776 to 494 to adopt an amendment to the Seventh-day Adventist Church Manual that they were told was specifically crafted to permit women to be ordained as local elders.

Elder Wilson’s answer to Ian’s question traces the issue from the 1973 Annual Council, when it was voted that “study be given to the theological soundness of the election of women to … offices which require ordination;” to the 1974 Annual Council, when it was added “that division committees exercise discretion in any special cases,” but without a prohibition; to the 1975 Spring Meeting of the General Conference Executive Committee, when it was voted “that … the greatest discretion and caution be exercised in the ordaining of women to the office of local elder”; to the 1984 Annual Council which reaffirmed the 1975 Spring Meeting “action that women can be ordained as local church elders.” It even includes the guidelines for such ordinations.

But the president does not include in this answer anything that happened after 1984. In addition to not mentioning that allowing female local church elders was a decision that the 1989 General Conference Annual Council had been authorized to make, he minimizes all earlier Annual Councils’ actions. “Due to the expense of international travel and other general procedural protocols for many decades, the expected attendance and composition at Annual Councils was not as fully developed with world division representation as it is now. It was not until the 1990s that there was wider world division representation at Annual Councils.”

Even if you accept the implication that all early Annual Council decisions were somehow less than fully valid because of not being fully representative, in this case one needn’t rely on Annual Council decisions, because at the 1990 General Conference Session in Indianapolis, the body voted precisely what Elder Wilson says was never brought to the General Conference in session: to authorize female local church elders, and to give them permission as local elders to conduct baptisms and weddings. On page 911 of the official General Conference Bulletin for the 1990 Session, a revised statement on “Ordination of Local Elders” to be included in the Church Manual is listed as a voted item among “session actions.” It also introduces gender-neutral language: previous editions of the Church Manual used “he” in referring to local elders, while the new language said simply, “the elder” and does not specify sex.

There was no misunderstanding of the intent of this revision when it was voted the next afternoon. In fact, it followed considerable discussion of this proposal and how it related to the historic decision taken at the same General Conference Session in Indianapolis to preserve unity in the denomination by not authorizing the ordination of women as clergy.

When this item was introduced on the afternoon of July 11, 1990, Dr. Calvin Rock was chairing the meeting. He is quoted in the minutes as saying, “The next item is the second part of the document on the role of women in the church.” (The first part was the earlier decision about not ordaining women as clergy, which the special study commission had found was not prohibited by Scripture or the writings of Ellen G. White, but might be the cause of great disunity in the denomination.)

Elder Neal C. Wilson, the General Conference president at the time and the father of today’s president, gave the background for the proposed revision. He traced it back to the 1985 GC Session when “a request was made to the North American Division Committee to clarify the functions of ministerial workers who hold ministerial licenses,” including “the functions of women who serve as pastors.” (Page 909.)

From its beginnings in the 19th century, the denomination has issued a Ministerial License to new clergy to give them a few years to prepare for ordination. After ordination, the Ordained Minister Credential was issued. After the first discussion of the ordination of women at the 1881 GC Session, conferences had begun issuing the Ministerial License to women who were serving as pastors. In the 1990s, Commissioned Minister credentials were introduced to provide a parallel set of credentials for unordained clergy.

The item was voted, and the meeting moved on to another related Church Manual revision, which clarified that unordained pastors were permitted to conduct weddings and baptisms. This discussion reignited essentially the same debate about the role of women in ministry. Many wanted to speak and the meeting ran out of time, so the discussion was continued at the meeting the next morning.

Elder Charles Bradford, the president of the North American Division, was asked to answer a number of questions that had been raised in the debate. He explained that “for more than a decade” licensed ministers who were ordained as local elders had been permitted to conduct baptisms and weddings. (Page 912) Elder Alfred McClure, who was elected North American Division president at this session because of Bradford’s retirement, supported Bradford’s statement and told the delegates, “We believe that the matter that is before us is one that does not divide the church, but rather provides for some diversity while maintaining unity.”

The chairman, Dr. Rock, reminded the delegates that “authority was given to the 1989 Annual Council by the General Conference Session” to decide the matter. A number of delegates expressed opinions for and against the proposed revision throughout the morning meeting, and as the afternoon meeting began, the chairman announced “there are 30 persons who want to speak” about it. (Page 936)

Toward the end of the meeting, Elder Neal Wilson again reviewed with the delegates the steps that led up to the proposed revision, which everyone understood would allow women ordained as local elders and employed by local conferences as pastors to conduct baptisms and weddings, a practice that had been done in North America for a number of years. “For 20 years I have lived in the midst of this particular storm,” said Wilson, who at this point had already been voted out of the GC presidency. “I wish that each of you would vote with the full conviction of your own conscience and heart. Please do not think that we are trying in any way to dissuade you.”

At this point, the vote was taken on the final part of the Church Manual revisions, those related to removing gender from the requirements for elders and permitting elders to conduct baptisms and weddings. Elder Kenneth Mittleider was the GC vice president chairing the meeting, and he announced the vote: “Those opposed to the motion: 494. Those in favor: 776.” (Page 938)

The delegates at the 1990 General Conference Session did in fact vote to approve allowing women to serve as elders, and even to allow women employed as pastors who have been voted as elders by a local congregation to perform ministerial functions such as baptisms and weddings. The documentation can be seen at either the GC Archives website or the Adventist Review archives web page.

In fact, a careful look at the history of the Adventist movement indicates that throughout its history there have been women serving as local elders, as preachers and as pastors. Although it has also long been the practice for only men to become ordained ministers, the arguments that this is a doctrinal requirement are more recent. There is nothing in Scripture or Adventist tradition that makes the office of ordained elder and ordained minister significantly different from one another. Ellen White, the most revered founder of the denomination and a woman believed by most Adventists to have exercised the ministry of a prophet, was recognized by the GC with the credentials of an ordained minister for much of her life.