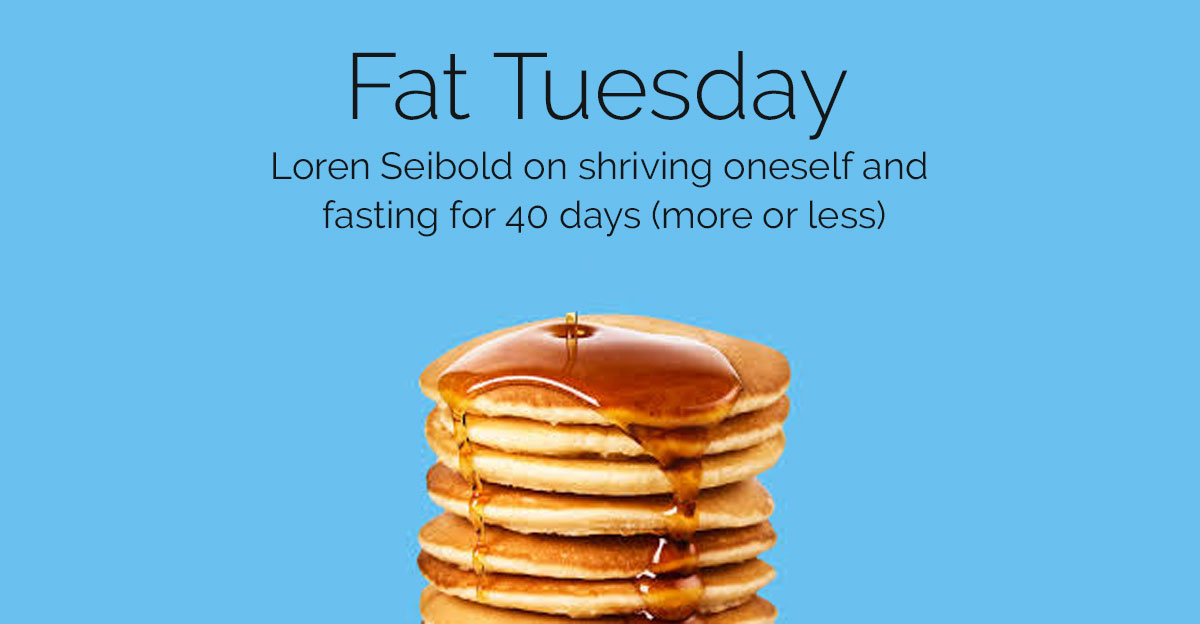 “In the week immediately before Lent everyone shall go to his confessor and confess his deeds and the confessor shall so shrive him as he then may hear by his deeds what he is to do in the way of penance.”

The Reformation wasn’t quite what some people think it was. Martin Luther and his ilk rejected a set of Roman Catholic abuses, to be sure. They put the Bible in the vernacular, and they basically told the pope where he could go. But in fact, they didn’t move very far from Roman Catholicism in many ways. There was still infant baptism and sacraments and belief in the decisions of the early church councils. Had you been a Lutheran just after Lutherans became Lutherans, you would have found the practice of the faith much more like Roman Catholicism than like modern Lutherans—much less anything like us evangelical Protestants.

But Luther had started a ball rolling that just wouldn’t stop. Christianity went from being one unified church (not counting Sabellianism, Docetism, Monophysitism, Nestorianism, Apollinarianism, Socianism, Donatism, Pelagianism, Gnosticism, Manicheanism, Bogomilism—and that’s just a start) to a church officially divided between east and west, to (post-Reformation) a bunch of new more-or-less regional Protestant denominations whose names we still know today, like Anglicanism and Lutheranism and Calvinism.

There were always a few heretics hiding out at the fringes, too, whom we Adventists feel some kinship with because Ellen White described their heroism for standing against the Catholic persecutors. What you won’t read in The Great Controversy about these rebels, such as the Albigenses and Waldensians, is that they too were closer to Roman Catholicism than they are to modern-day Protestants. They held dear some rather odd things, such as triclavianism, the belief that only three nails were used to nail Jesus to the cross, not four, and that he was pierced on the left side, not the right. This may seem unimportant to you, but it earned them the status of heretics from Pope Innocent III, and added one more reason to persecute them. The Albigenses, I should add, were also Gnostics, and the Waldenses were much more ascetic than most of us would be comfortable with today, abandoning most worldly goods—Peter Waldo wouldn’t have been seen driving a Tesla, as some Adventists do.

But as I said, the ball was rolling, and it took the establishment of America, home of religious freedom and free enterprise, to show the world that anyone with a Bible and an idea could start a religion. And sometimes it seemed like almost everyone did. This was sort of a capitalistic notion: you could start your own church just like you’d start your own business. Each new religion seemed to stray further from what Christianity had been under the Roman Catholic hegemony. By the 19th century, Adventists and other new Protestants were openly reacting to anything that seemed to have dripped down to them from Roman Catholics.

Yet a lot of Catholic stuff remained in the religious DNA, things we didn’t want to rethink. The canon of Scripture that the Roman Catholic councils decided upon, for example, has remained more or less intact, and you rarely hear Protestants talk about taking some books out of the Bible and adding in others. The Trinity, which most of us accept, had been hammered out by the Roman Catholic church councils, too. And Christmas, for all kinds of cultural reasons, hangs on—and conservative Protestants defend calling it Christ’s mass without really thinking about what that implies.

Yes, children, some of the core stuff you believe was worked out by Catholics, whom a few people like to call “Babylon.”

But I’ve gone way off track. What I started out wanting to write about is Shrove Tuesday, which is today, the day before the 40 days (more or less) of Lent begins.

Somewhere along the line (fairly early, I think) Catholic clerics began to assign Biblical events to celebrations at certain times of the year, as a means of teaching their unlettered parishioners the stories of the Bible. One of these celebrations was Lent (the word just means springtime in old English), which started 40 days (more or less) before Easter. It was intended as a time to purify your heart in preparation for celebrating Christ’s death and resurrection. (You know, of course, that 40 days is mentioned in the Bible a couple of times with reference to a period of fasting—Deuteronomy 9:9; Matthew 4:1-2).

Roman Catholics started this stuff, but as I said, the newly-minted Protestants didn’t necessarily reject all of it. Many of the so-called mainline churches still celebrate Lent. For a variety of reasons, we newer Protestants threw out most of the church year (except that mass on the 25th of December, of course).

One of the reasons we didn’t hold on to Lent had to do with what happened at the beginning of Lent in certain parts of the Catholic church. You were meant, on that Tuesday 40 days (more or less) before Easter, to “shrive” yourself—go to confession and start a period of fasting, reflection, and abstinence, with a clean slate.

But if you’re going to start fasting (which generally didn’t mean starving yourself, but only giving up anything you really liked to eat or drink or do) you have to, before the fast begins, use up all your rich foods, all your meat, all your booze, all your tobacco, so they’re not in the house to tempt you between now and Easter. If you’re giving up sex, you want to have one last fling in that department, too. And gambling. And stimulating music and dancing. If it’s fun, do it like crazy for a few days, because for the next month-and-a third there won’t be any of it.

So Catholics in some areas made this pre-fasting preparation into a celebration itself. “Mardi Gras” literally means “fat Tuesday” (or even “greasy Tuesday”): have a big fat feast before you fast. Indulge yourself—sin like crazy—before you have to give up everything you enjoy. Eventually (again, only in some places in Roman Catholicism—we shouldn’t generalize about Roman Catholics any more than we should any other group of people) the fasting part was mostly forgotten, and just the part about sinning like crazy for a few days survived. In some countries, it’s referred to as Carnival.

It’s no surprise that serious Protestants, seeing these saturnalian excesses, said, “That doesn’t seem very Christian.” For us Adventists, it confirmed all our suspicions that Roman Catholicism was paganism under different symbols—which notion, as you already know, is a staple of Adventist prophecy sermons.

Lent is rarely practiced among us late-stage Protestants. I suppose if it had remained Shrove Tuesday, a time to confess our sins and reflect and start over, it might have had a chance. But when Lent started with Mardi Gras, it rather tainted the practice of abstaining for 40 days (more or less).

I can’t think of any good reason why we should practice Lent, though neither can I see the objection to 40 days of fasting and prayer. If the General Conference announced such a thing, you can be sure a great number of Adventists would see the value in it, and come closer to God during that time. Still, when it comes to abstinence, we Adventists are a bit more constant. Many of us abstain from meat, alcohol, tobacco, dancing, jewelry and a bunch of other things, every day. Even the most casual Adventists are forced to abstain from meat when they come to Sabbath potlucks. So in some ways, we live our own Lent.

There are some Christians who start Lent in a gentler way. The British, Scots and Irish use up their eggs and fat by making pancakes on Shrove Tuesday, which seems a nicer way of managing the transition from abundance to abstinence. They call this day, appropriately, Pancake Tuesday. Unlike Mardi Gras, you’re not encouraged to go out and sin wildly, but only to eat pancakes. If you want to celebrate Pancake Tuesday, no one will fault you, and you can find a recipe for Pancake Tuesday pancakes right here.

And then, perhaps, you can think of something you can give up until Easter and see how it feels to practice abstinence, as many of the Bible characters did.