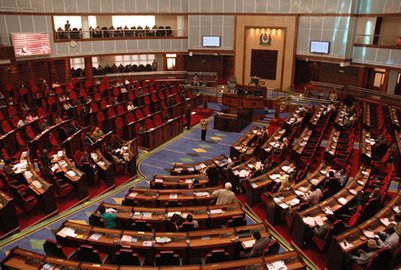 By Tysan, May 23, 2017:      The Hon. Ester A. Mahawe is a member of parliament (MP) in the Party of Revolution (CCM) and an active member of the Sakina Seventh-day Adventist Church in Tanzania. The 43-year-old was born to Adventist parents, has remained actively involved in the faith and says she has no intention of leaving until the end.

Mahawe currently resides in  Arusha and works on behalf of the Manyara people. She has been a member of the Sakina congregation for the last 17 years, helping the church in several ministries she has led, including serving as chair of the church choir several times as well as the chairing the building committee. Other church programs have also had her strong support.

Mahawe says she got involved in politics “because I felt a strong passion [about] how I saw women and children suffering. I just told myself there must be a way to help them.” This same motivation had made her the owner of private schools named Intel Schools. The schools have educated more than 200 orphans for free in addition to the regular student body. She also gave a piece of land from school property where the Shamsi Church building was erected.

She is the mother of three biological children and has adopted six more. Her goal is a better environment for children across her country and she works to serve the neediest youngsters. She says, “Where I am its [due to] God alone, so why should I not try to give back to the community and share His blessings with my people?”

The nation’s Attorney General, George M. Masaju is also an MP as well as a key cabinet member. Other Adventists who serve as MPs in Tanzanian include The Hon. Elibariki E. Kingu from West Singida and also in the CCM party; The Hon. Upendo F. Peneza who is in the Democratic Party (CHADEMA); The Hon. John W. Heche from Tarime Vijijini also with CHADEMA; The Hon. Angellah J. M. Kairuki, a CCM MP; and The Hon. Felister A. Bura, a CCM MP.

The National Assembly or parliament has a total of 357 elected MPs. Tanzania has a population of 52 million and about three percent are Adventists according to the 2008 Pew Research Center survey of religion in sub-Saharan Africa.

Tysan is a correspondent for Adventist Today based in Africa. The featured photo is of the Tanzania National Assembly in session.