Seek and You Will Find 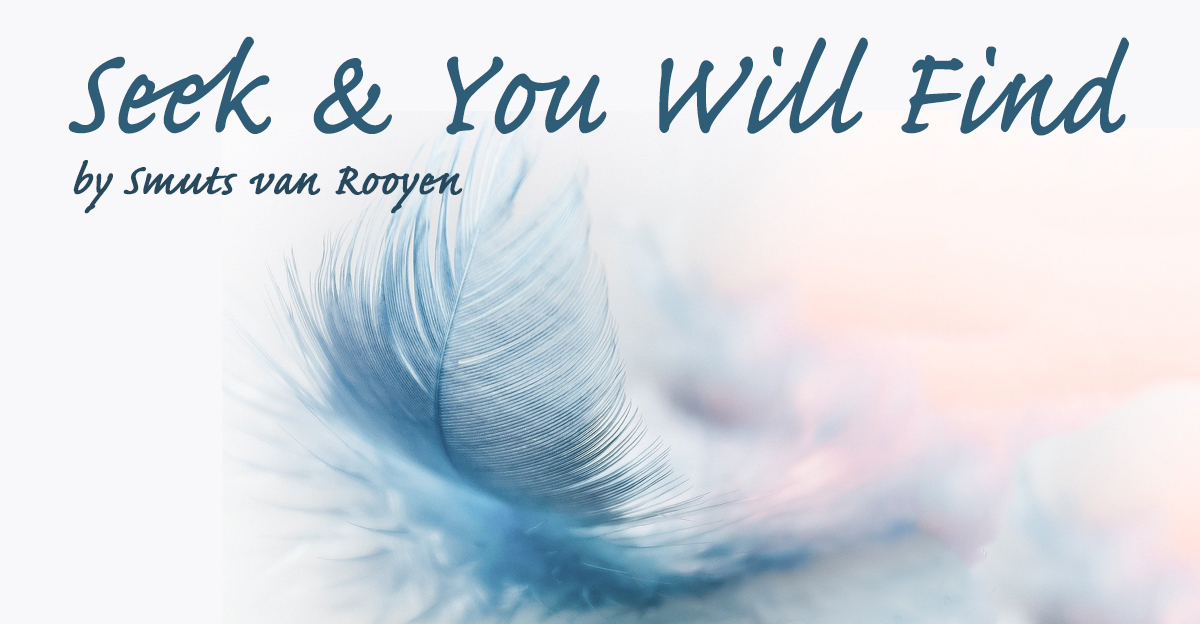 In the heat of the day a young hunter came to a clearing in the Forest of the Night and there knelt down by a pool of water, transparent with the blue of the African day, to quench his thirst. At that moment he was dazzled by the reflection in the pool of a great, white bird of a kind he had never seen before. Instantly he looked away and up, but the bird had vanished.

From that moment he was filled with a great unease and could not rest. His community, who valued him greatly, assured him that the restlessness would pass, but a conviction that he would not rest until he had seen the great white bird itself grew stronger in him by the day until one morning he left the place where he had been born and set out to search for it.

The journey lasted so long and took him so far and wide that he was an old man, feeling his end was near, when he came to a great mountain. There he had firm news of the bird at last.  He was told that it nested on the summit of the mountain. Enfeebled as he was, he slowly climbed the mountain, and towards the end of a long day, as he came over the last of many false summits, he found himself confronted by a final cliff he knew he could not scale. At the end of his physical powers, sadly he prepared himself to face his end.

But then it was suddenly as if a voice within him was commanding him to look up to the forbidden summit, and as he did so he saw, in the light of one of the greatest African mythological sunsets, a pure white feather fluttering down from on high towards him. He put out his hand and grasped the feather and, they who told me the story said, he died content. When I asked them what the name of the great white bird was, they told me: “The bird has many names but we believe it was the Bird of Truth.”

Yearning to find that beautiful bird reflected in the water

There are several factors that would seem to disincline humans from ever engaging a search for truth. For starters, we know our senses are not always reliable, and sometimes fool us. No, those railroad tracks do not actually converge in the distance as our eyes tell us they do. Neither does the stick we poke into the water actually bend.

Moreover, our memories are often inaccurate, so that our recollection of history is skewed, often in our favor.

Then too, we know that experts seem to contradict each other on almost every issue from the sublime to the ridiculous, from whether there is a God to should we still eat bananas. If experts don’t know, how can we?

And finally, there is no absolute norm for what true knowledge is. Truth to some degree is culturally determined; we cannot get away from what makes us who and what we are. Africans eat nourishing mopani worms three inches long with relish, while most Westerners gag when they try. I’ve given it a go and failed. Who is to say what tastes good?

Nevertheless, humans are wonderfully undeterred by such skepticism. Why? Because it seems to be a law of our very nature to search for truth. It’s what humans do. We follow truth as naturally as sunflowers track the sun across the sky, or newborn giraffes seek to nuzzle their mothers. We are programmed to explore, to discover, to value the search and to preserve what we find.

As a consequence we have learned the skills of language and mathematics, built expensive museums just to house beauty, invented tools that can make tools, constructed cathedrals over the span of centuries to glorify an unseen God, invented the pipe organ and composed music to play on it, devised systems of just governance, landed people on the moon, and through it all been willing to die for the quest. The pursuit of truth itself is our greatness and our meaning. What a grand species Homo sapiens is!

The truth progresses by false summits

A false summit gives climbers the illusion that they are reaching the final peak. But it disappoints because it is not the crown of the mountain, but only an upper roundness that deceives. It is not the final truth, the penultimate reality. Nevertheless it is a productive misconception because it brings the climber nearer the goal. False summits are not failures. They’re places to catch the breath and then press on.

The feather drifting down

Finally, one day, there’s the realization of coming against the unscalable rock wall. The questions are too hard. The brain is too small. The body is too tired. The hidden too invisible. One has gotten old from yearning.

But all is not lost, because hearing an inner voice to look upward, one sees a single feather floating down. And when caught in the hand it tells one the journey has been worth it, and always desired.

Thank you for your support in our end-of-year fundraiser.
We’re still a little short of our goal, and we’d ask those of you who haven’t sent anything yet, to give us a gift before the month ends. You can do this in several ways.
You can donate one time by clicking this link
or
monthly by clicking this one
or call us toll-free at 800.236.3641