July 11, 2017:    Right on the heels of last month’s London-based Unity 2017 conference, a symposium promoting very different views yet also purporting to support unity within the Adventist denomination will be held August 1-3.

Unlike the Unity 2017 meetings in London organized by union conference officers from four divisions (regions) of the denomination that broadly support women’s ordination, the organizers of this event are stridently opposed to the practice. The symposium titled Scripture, Church Authority and the Path to Unity is organized by the very conservative Secrets Unsealed independent media ministry. It will take place at the organization’s facilities in Fresno, California. The media ministry is led by Pastor Stephen P. Bohr who authored, among other books, Reflections on Women’s Ordination, a 2012 volume that strongly opposed women’s ordination in the Adventist Church.

Bohr will speak at the August symposium and will be accompanied by an exclusively male lineup of other speakers including a General Conference vice president, Pastor Guillermo E. Biaggi. The denomination’s top leadership has shown its hand in this situation because it blocked a number of speakers from General Conference institutions who were scheduled to speak at the London conference.

The other speakers at the August event are associated with Ordination Truth, an online platform that campaigns vigorously against ordination for women pastors in the Adventist denomination, including Larry Kirkpatrick, Mike Lambert, Kevin Paulson and Pastor Mario Veloso, a retired General Conference officer. 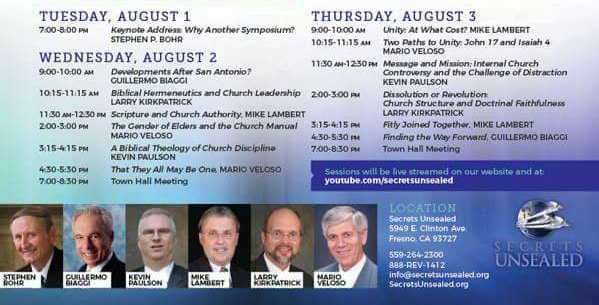 Topics for the symposium include church authority and discipline as well as church structure and internal controversy.

Both the London-based Unity 2017 conference and the upcoming Secrets Unsealed symposium come in the wake of the release of a document on unity created by the world leadership of the Adventist denomination and voted into church policy in 2016.

The document, titled “Unity in Mission: Procedures in Church Reconciliation,” was created after a highly controversial vote by the denomination’s General Conference delegates in 2015 against allowing divisions to decide for their regions whether or not to ordain women as ministers.

The result of the ordination vote meant that parts of the church that had gone ahead with women’s ordination were seen by world church leadership as being in need of reconciliation to the official policy of not ordaining women.

The unity document is part of an attempt by some denominational leadership to secure unity through uniformity within the denomination on the issue of women’s ordination.