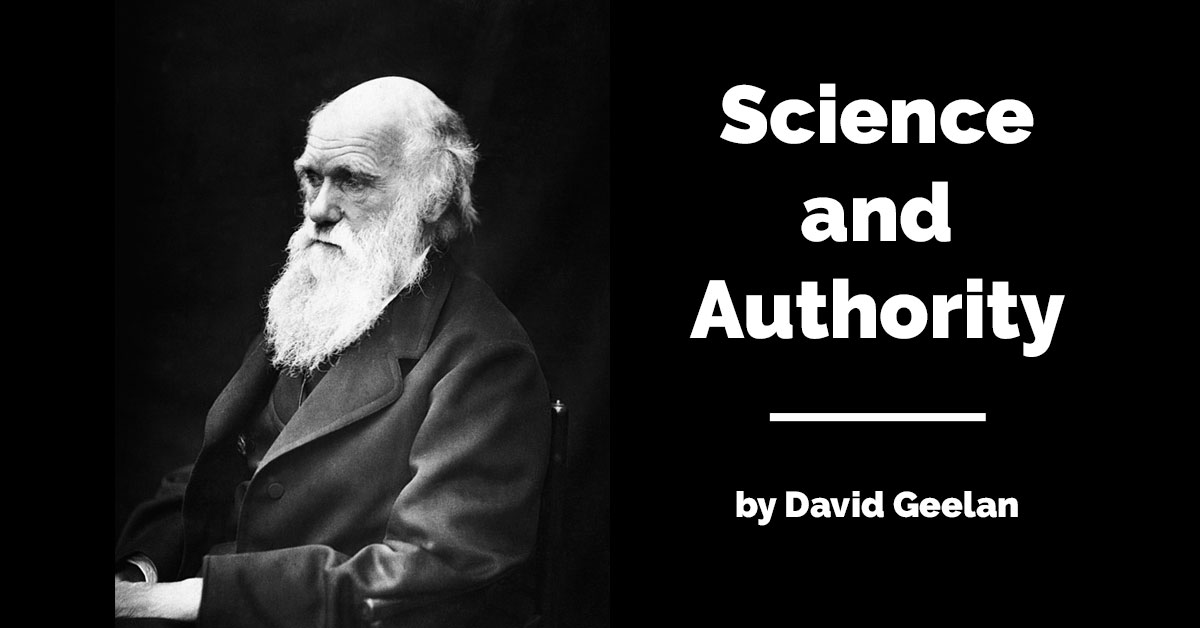 If my name and qualification list is written out in full, it is Associate Professor David Geelan, FACE SFHEA, BEd (Chem), M.Ed, PhD, GCertSci(Phys), GCHE, and I’m currently President and Managing Director of the Australasian Science Education Research Association.

I suppose I could, but I never do, roll out some or all of that as an authority claim, to try to lend weight to some view or opinion I hold, in discussion. That would be an appeal to authority, and it can be very tempting, but it’s not a valid move in science. Even if there were a Nobel prize in the list, saying “I’m right because of who I am” is not acceptable in science. Only appeals to evidence and argument “count.”

Indeed, very senior scientists are quite often wrong, despite their qualifications, knowledge and experience: senior scientists’ being wrong is how science advances. I certainly know I’m often wrong! I fact-check myself as assiduously as I can, but I also have a lot of friends who agree with me about things, and quite a few who disagree, who also challenge my errors and help to keep me honest.

My most recent piece for the Adventist Today website, back in August, was entitled “Does the Church Have Authority Over Science?” The distinction between being “authoritarian” and “authoritative” might be useful here. The former is authority exerted through power, force or coercion. An authoritarian government does not require the consent of the governed, because it is willing to use power to enforce its wishes. That article was a response to my perception that the Seventh-day Adventist church may be heading in a more authoritarian direction in relation to some issues.

Being “authoritative,” on the other hand, is being able to make a case through having particular knowledge. There is an appropriate place for this form of authority in the teaching of science, and perhaps in science communication for social purposes, for example, but not within science itself. If I want to learn about quantum physics, for example, I will typically seek out someone with a PhD in the field, who is currently and actively conducting research in the field, before I will seek out someone with a high school science education who “has a theory.”

The education and vocation don’t guarantee that I will learn the best current view of science about quantum physics – the physicist may be suffering from dementia, or have suffered a psychotic break, or be a crank for any of a range of reasons. But at least being authoritative in an area is a good first indicator of whose views might be most worth listening to. The same applies in other fields of life, including theology, of course. Again, if I really want to understand a particular passage in a particular sacred text, I am likely to either go and talk to, or read the work of, a theologian with a PhD in the field who is conducting active research in the field, rather than… someone with a high school (or Sabbath School) education and a “theory.”

But trusting authoritative knowledge claims can be dangerous. While I know a little physics, my PhD is in the field of education, not physics. If my doctorate gave any weight to my views on anything at all, it would be education – not physics, and not international relations, theology or any of a vast range of other fields. We tend to see lists of “PhD scientists” who do not accept that climate change is (a) occurring and/or (b) significantly contributed to by human activities trotted out as evidence, but spending a little time looking into the qualifications and working lives of the people whose names appear on those lists typically shows that their field is not climate science. They are talking outside the bounds of their specialist knowledge, and as such their views should have no more weight than the views of any other citizen, because they are not, in fact, authoritative in the particular domain in which they are making a claim. This is particularly stark precisely because of the contrast of these claims with the overwhelmingly strong consensus on those two points on the part of the actual climate scientists whose work is in the relevant field.

I want to return for a moment to something I said earlier: “Senior scientists’ being wrong is how science advances.” It’s true. I sometimes hear claims that scientists are banding together to protect the current status quo – whether that be climate change, evolution or even (from some of my more… interesting correspondents) quantum theory or relativity – against challenge. The suggestion is that the grant funding and the rewards are in protecting the status quo.

Nothing could be further from the truth. The way to make a reputation in science is to overturn previous science. It is falsifying the status quo that leads to fame, not buttressing it. Perhaps the most influential account of the history and philosophy of science is Thomas Kuhn’s in The Structure of Scientific Revolutions, and the largest task in the philosophy of science is to account for how and why the community of science changes its allegiance and interest from one theory to another. No-one wins a Nobel for just validating the work of earlier scientists.

Another peril of relying on an authoritative, rather than an evidence-based, approach is that it can lead to ideas being judged on the personal qualities of their originator, rather than on their own merit. Martin Luther kicked off much of the Reformation and reformed Christianity, and wrote my personal favorite hymn, “A Mighty Fortress.” He was also a horrendous anti-Semite. We would certainly not listen to his views on Jewish people and their worth, but there is likely to be abiding value in his teaching on salvation and the impossibility of buying one’s way into heaven.

Similarly, Nobel-winning physicist Richard Feynman thought of himself, and wrote quite candidly about himself, as a “ladies man,” but to modern eyes seems much more like a serial sexual harasser. We wouldn’t adopt or emulate his approach to relationships between the sexes, but his pioneering work in quantum mechanics will remain valid… until someone overturns it in future with a better and more powerful theory.

An authoritative – or even perhaps authoritarian – approach is likely also the reason why creationists tend to refer to “Darwinism” rather than evolution, and seek to “overturn Darwinism.” Never mind that evolutionary biology began “overturning Darwinism” almost before Origin of Species hit the printing presses, and has been doing so ever since. The “modern evolutionary synthesis” differs in very important ways from Darwin’s description, and on many issues, Charles Darwin was plain wrong. It’s important to remember that the DNA molecule was not discovered until 10 years after the publication of Origin, and the gene concept was not even developed for another 40 years after that. “Darwinism” is not an ideology or belief system: it could be argued that it is not a “thing” at all. We don’t call gravitational theory “Newtonism” or “Einsteinism” or our theories about electric circuits “Faradayism.”

The process by which science proceeds, according to philosopher of science Karl Popper, is by “conjectures and refutations.” Theories are created by human beings on the basis of our existing knowledge, then tested to destruction in experiments. The ones that have so far survived all experiments without being “falsified” by experiment are our best current understanding of the world, but they are always vulnerable to being falsified in the future. Scientific knowledge is not certain knowledge, but it is tested, useful, reliable knowledge.

In the end, the standard that is appropriate for judging the quality of scientific theories is whether or not they have descriptive, predictive and explanatory power. Do they describe the world as we see it around us, allow us to predict novel occurrences in their field and offer an explanation of a causal mechanism that will lead to particular outcomes given particular conditions?