I was serving as the interim pastor of a small church in Georgia not too long ago. On a Sunday morning the church leaders and I sat together to discuss the business of the church. It’s a small rural church, but given the trend of current events I thought it’d be wise to encourage the leadership team to think about a set of safety measures and strategies to respond to an active shooter in the church should the need arise.

On that very same day, right about the same time that we adjourned our meeting, Devin Patrick Kelley walked into the Sutherland Springs Baptist Church in Sutherland Springs, Texas, with a Ruger AR-556 semi-automatic rifle and opened fire. He murdered 27 people, and wounded 20 others.

This tragedy hit a little too close to home for me. Not simply because I had literally just finished talking to my church about the need for a clear security plan when it happened, but also because the assailant lived about twenty minutes away from my in-laws.

That was 2017. Suddenly my family didn’t seem safe.

Now, it’s necessary to point out that the official definition of “mass shooting” identifies an event in which three or four people or more are wounded. These incidents can include home-invasions, drive-by shootings and other similar crimes where people are injured simply because they are present when a crime takes place.

However, mass murder is different. Mass murder is when a person sets out with the intent to do bodily harm to a large number of people at once.

Definitions notwithstanding, the majority of these mass murders are committed by white males. Recent reports tell of a July hearing where “FBI director Christopher Wray told a Senate committee: ‘I will say that a majority of the domestic terrorism cases that we’ve investigated are motivated by some version of what you might call white supremacist violence, but it does include other things as well.’”

And this is where things begin to get really uncomfortable for me as a black man in America. I am mindful that white nationalism is on the rise, and that white-nationalist violence is on the rise too. And the targets are typically people who look like me and my family members. I am much more careful and vigilant these days because of it.

I have usually stood up for myself and spoken up for myself when I felt like I was being mistreated or wronged. However, this is 2019 in the USA, and these are the days when a guy will pull out a knife and slit your throat because he doesn’t like the music you’re playing.

I am now much more careful.

The rise of this phenomenon is actually not mysterious or inexplicable at all. Social scientists have long argued that this spike in hate is the result of shifting power dynamics in the country. The Southern Poverty Law Center has addressed the same issue in its description of the current trends in white nationalism, especially as it relates to the alt-right:

The racist so-called “alt-right,” which came to prominence in late 2015, is white nationalism’s most recent formulation. While the themes of white dispossession, nostalgia for pre-1960s America and the desire for separatism remain central to the ideology, its edges are softer and porous, allowing for the influence and inclusion of more radical elements, including a suite of neo-Nazi organizations. There is a concerted effort on behalf of the dominant group to reconsolidate power and ensure that minorities and all “others” do not continue to encroach on cherished sacred spaces by way of economic development, scholastic achievement or political agency. And thus the gunshots continue to ring out, because fear and force have long been key tactics of white supremacists.

The more I think about it, the more I realize that the hate is often masked under the guise of faith. As a man of faith and a clergyman, this makes me even more uncomfortable. But it also makes me wonder where my particular denomination stands in the midst of this.

Some argue that I shouldn’t have to question where the church stands. The North American Division issued a statement shortly after the mass shootings in Texas and Ohio. The challenge for me is that the official statement is often a far cry from the messages I get from other clergyman and committed Adventists who attend Sabbath School and study their Sabbath School lesson quarterly faithfully. I’m often uncomfortable. We preach unity, diversity, tolerance and the like, but what we actually practice and the closed-door conversations are often far from these ideals.

Alisa Williams shook a lot of people up the other day with a blistering twitter thread about a terribly harrowing experience she had as a seven-year-old that really gets at the heart of what’s happening in Adventism and in our world. She told the story of having a gun pulled on her and other Sabbath Schoolmates as the teacher was supposedly demonstrating the need for them to be fearless and faithful in the last days. It turned out that the gentleman was a little too close to carrying out a terrorist act himself; having a small personal armament in the trunk of his car. He was arrested. Isolated incident, right? Maybe. However, it’s possible that that random occurrence tells us more about Adventism than we would like to admit.

Williams dives deeper to point out:

Maybe this is why the Adventist Church has such a hard time denouncing white supremacy: because same recognizes same. Radicalized Adventism stems from the same ideology as white supremacy: fear of the “other” and feelings of superiority toward those we’ve marked as different. Marc was so terrified by the “other” that is preached against from Adventist pulpits that he couldn’t see them as human beings anymore.

And there’s the really difficult part about this. We start learning about all of the things we don’t accept, and all of the things we don’t do as Adventists from day one of cradle roll Sabbath School class. Adventists are known as people of the book. And we pride ourselves in that. We do not mix or mingle with anything or anyone that is unclean or off-limits. We learn that we are better because of what we don’t do. We are better than those “other” people who worship on the wrong day, eat forbidden foods and live seedy lifestyles.

In fact, Adventists are often the most pleasant and simultaneously intolerant people you will ever meet. I can’t stress that enough. Adventists are the nicest people you will ever meet. We will smile and say “Happy Sabbath!” We may even invite you over for Sabbath dinner if you’re lucky. We will usually only secretly judge you. Nevertheless, if your behavior is too unsavory you may very well actually get a chance to see our displeasure for you. And please recognize, it’s this same intolerance that leads folks such as Dylann Roof and Devin Kelley to open fire on innocent people.

And I think this explains a little bit more the deafening silence after these hateful atrocities, and unwillingness of Adventists to denounce white supremacy. It’s the reason why we are inactive and uninvolved in fighting against white supremacy and fighting for social justice. It’s because secretly we count ourselves with the in-crowd. We are a part of the mainstream; the dominant group. We are in. They are out. We secretly despise those who are not like us, do not accept our beliefs and do not live as we do. The “other” ones are not actually worthy of advocacy. If they pull themselves up by their bootstraps, then maybe they can be Adventists one day too.

It sounds outlandish, yes, but I think it’s what we are taught implicitly, and we secretly cherish these supremacist ideals.

We need to re-learn how we might honor God with advocacy for those who are at the greatest risk. We need to be re-taught about Jesus’ own philosophy of ministry. He said, “The Lord’s Spirit has come to me, because he has chosen me to tell the good news to the poor. The Lord has sent me to announce freedom for prisoners, to give sight to the blind, to free everyone who suffers, and to say, ‘This is the year the Lord has chosen.’” We need to be reminded of the words of Jesus that when we serve “the least of these,” we are serving him directly and personally.

I love the Lord. And, I love the church. My life has been miraculously transformed by the power of the good news of God’s love. The church has enhanced the quality of my life in ways that this space doesn’t afford me to share. Nevertheless, I have often felt like one of the “others” within the church. The others are usually alienated at official events, and when decisions and disbursements are made. The others have language, clothes and music that’s not refined enough. And there are those who will often remind you of your otherness as well. That is why I have dedicated my entire life to serving the “others” of the world. My teaching is for the “others.” My writing is for the “others.” My entire ministry is for the “others.”

I take courage that Jesus always made time for those who were cast aside and downtrodden. As a matter of fact, Jesus “came to seek and save” and spent significant time with those who were “other.” I’m reminded that he said that when it’s all said and done, the “last shall be first, and the first last.” I look forward to the day when the voice of the Archangel will ring out with the trumpet of God. Then all of the others who lost their lives in senseless acts of violence at the hands of those who felt themselves more worthy of life, liberty and the pursuit of happiness—all of those others who died—will be raised to meet the Lord in the air. And Jesus will say to them, “Enter into the joy of the Lord.” 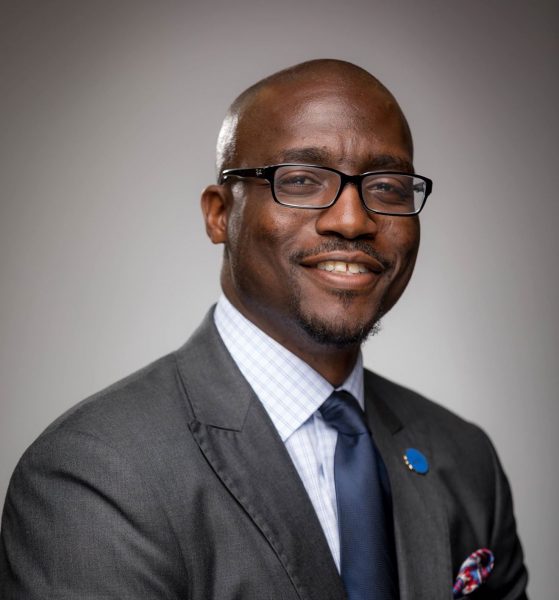 Christopher C. Thompson works in Huntsville, Alabama, for the Breath of Life broadcast and ministry. He and his wife, Tracy, have one son, Christopher II.

“That’s not your real hair color, is it?” Adventist Summit on Abuse