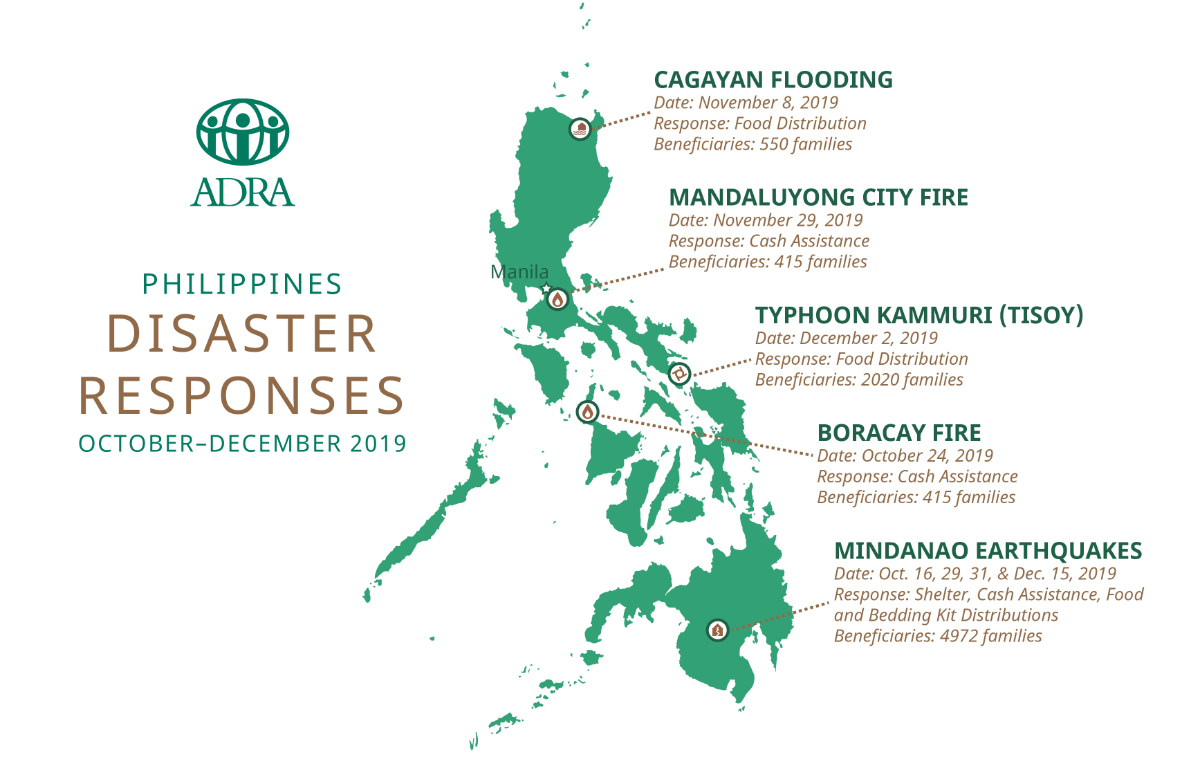 From ADRA – 17 December 2019 | The Philippines is known for being a disaster-prone country, ranking second on the global climate risk index in 2018 and fourth in the countries most affected by extreme weather events since 1999. This is largely due to its geographical location along a typhoon belt and in the Pacific Ring of Fire.

From February to August, The Adventist Development and Relief Agency (ADRA) conducted five disaster relief interventions in the most affected districts in the Philippines. This included mosquito nets, woven sleeping mats, blankets for the fire in Cebu City, cash assistance for the fires in Batangas and Mandaue and for the earthquake in Batanes, and family food packs for areas that were flooded in Lanao del Norte.

Since October, the Philippines has been hit by additional natural disasters, including four earthquakes, and multiple aftershocks, in Mindanao, two fires in Boracay and Mandaluyong, flooding in Cagayan, and a typhoon in the southern Luzon and northern Visayas area.

With help from the local Adventist Community Services, ADRA has spent the last nine weeks in the Philippines responding to all those disasters. In an effort to help, cash assistance, emergency shelter repair kits, food and mattresses and sheets have been provided to families impacted.

“Despite being one of the most disaster-prone countries in the world, we are glad that our great partnership with the Seventh-day Adventist Church in the Philippines has allowed us to respond quickly and efficiently to all of these emergencies,” says Tom Pignon, country director for ADRA in the Philippines.

“The last nine weeks have been hectic, but this is something that ADRA prepares for,” he says. “We continue to respond in the following weeks to the earthquake and typhoon victims and would like to thank all the donors and partners who have contributed to this endeavor.”

For updates on ADRA’s ongoing response in the Philippines, visit https://www.facebook.com/ADRAPhilippines/.