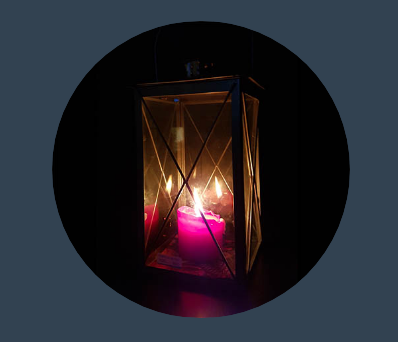 The Darmstadt-Marienhöhe Adventist Church in Germany is offering a live broadcast of its Christmas Eve program at 4 p.m. (Central European Time) which features The Peace Light.

For the past 35 years, a child from Austria has traveled to Bethlehem, West Bank, to kindle a flame from oil lamps that have been burning for more than a thousand years at the Church of the Nativity in Bethlehem, where many believe Jesus was born, according to Peace Light North America.

The fire is kept in two explosion-proof British mining lamps, fueled by smokeless paraffin oil, and flown with a safety adviser to Austria. There it is distributed at a service of dedication to delegations who take it back, with a message of peace, to their own countries, according to an article from the Catholic News Service.

This year, the Peace Light was lit in November by a 9-year-old girl. It arrived in Darmstadt on Dec. 12, 2021, where members of the “Arctic Wolves” Christian Boy Scouts and Boy Scouts of the Advent Youth (CPA) of Marienhöhe picked it up from a motorway service station, according to an APD article.

On its journey to Darmstadt, the Peace Light (or Friedenslicht) traveled more than 3,000 kilometers (1,864 miles) across many borders.

“The Peace Light is passed on personally in all European countries and even in North and South America. That alone connects us with so many different people and creates something in common,” said Haiko Müller, head of the Marienhöhe Boy Scouts.

The Peace Light is typically made available to the public in special services on Christmas Eve where people can create their own Peace Lights from the flame.

“Our goal is for peace to spread faster in Darmstadt and around the world than any viruses. Peace is an active process that everyone can do something for,” said Müller. “Everyone can take part and pass on the light of peace to neighbors, friends and also to strangers as a symbol of good togetherness and warmth in our city or as a reconciliation after an argument.”

However, services can only take place on a small scale everywhere due to COVID-19, reported the APD.

“Unfortunately, this year only a few people can attend the Christmas service and take the light of peace with them,” read the Darmstadt-Marienhöhe Adventist Church website.

So the Darmstadt-Marienhöhe Adventist Church decided to bring the Peace Light to the people — through the internet. In this way, Christmas and the light of peace can come into every living room, said Muller.

Besides the livestream of their Christmas service, the church is encouraging people to share a Digital Peace Light, by forwarding a link that has a picture of the church’s Peace Light.

“Not so ❤ romantic, but very 😷 hygienic,” read the church’s site. But the advantage is that “the digital peace light cannot go out, and nothing burns if you put your mobile phone aside. 😁”

The campaign was originally organized in 1986 by the Austrian Broadcasting Co. as part of a large charitable relief mission Light into Darkness, for children in need in Austria and abroad, according to Peace Light North America.

But now, the little flame from one of the world’s crisis regions offers a concrete reason to rethink personal values ​​and what connects or divides people. Building on the message of Jesus Christ, the actions of the scouts in passing on the light is an expression of faith and a sign of devotion to one’s neighbor, said the APD.

“With the Friedenslicht we want to set a sign for peace, for human coexistence across borders — regardless of whether it is national borders or borders between people,” said Müller.

(Photo: The Peace Light at the Darmstadt-Marienhöhe Adventist Church is seen here. The church is offering a live broadcast of its Christmas Service featuring the Peace Light on Dec. 24, 2021, at 4 p.m. (Central European Time). Photo via screenshot.)