One More Day in the Life 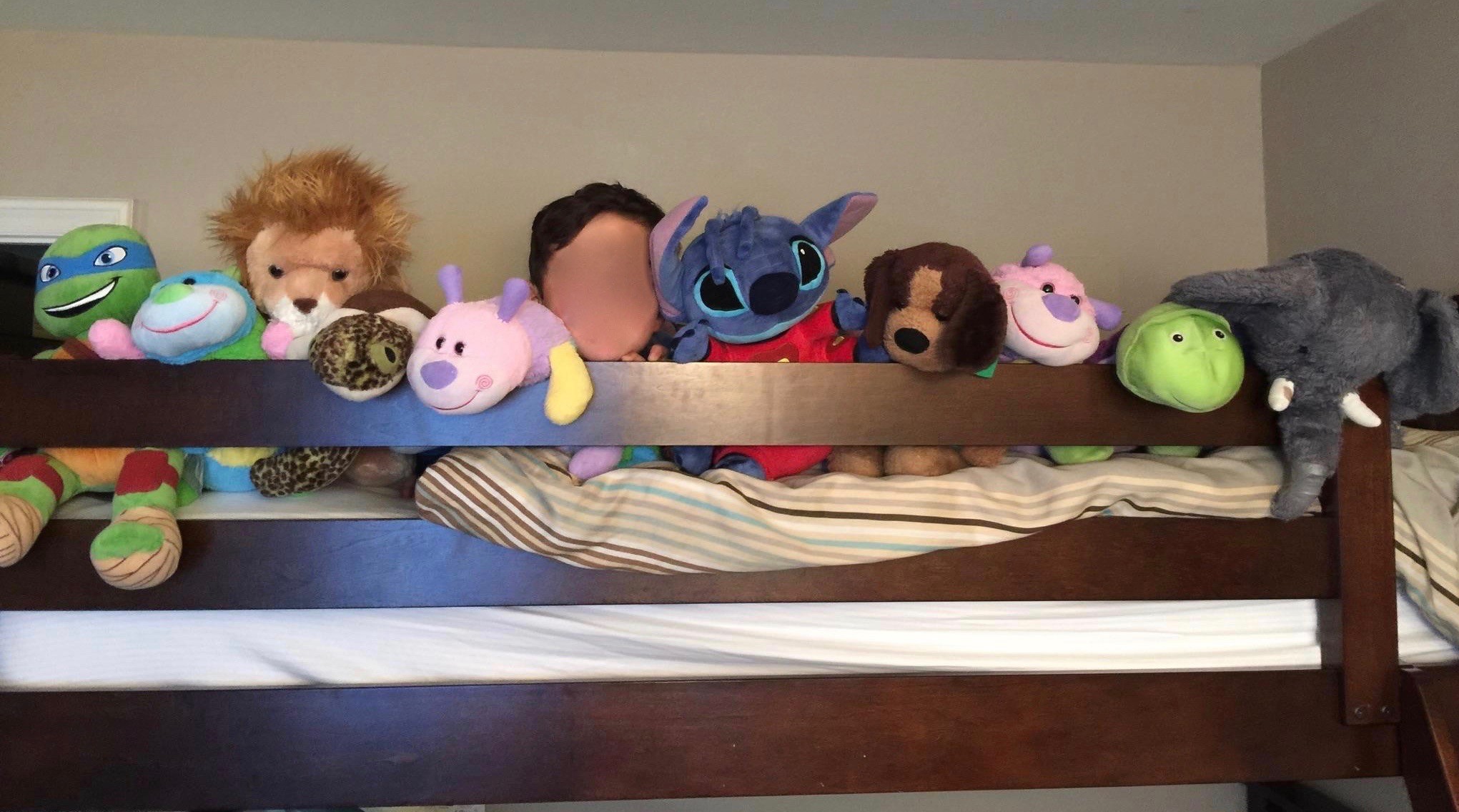 By S M Chen, posted Dec 14, 2016 by D Kovacs
The bedroom of my six-year-old grandson is, like those I imagine of many children his age, replete with stuffed toys and animals. OK, perhaps he has more, although, being less familiar with other kids, I cannot say with certainty. 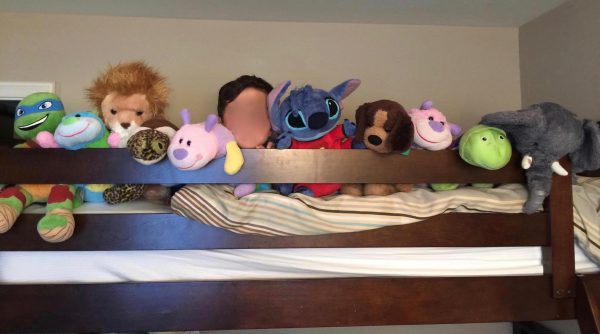 Among others, he has several multicolored caterpillars, which he affectionately calls ‘Catepees.’ In addition to their smiling, colorful heads, their bodies have transversely oriented colors, spanning circumference. His favorite is a smaller, older one which contains uneven stuffing such that its midriff, being relatively devoid, is slimmer and a bit unsightly with fabric creases for lack of filling. To me, it is less attractive than others, most of which are newer, and some larger. But, to him, it is no less appealing and cherished. Maybe because it has been with him the longest.
***
When, decades ago, I lived for a couple years in a landlocked third-world country halfway around the globe, I encountered practitioners of something I had never seen previously – or since. The fluffer plies his trade with an ingenious bow-shaped contraption, suspended by rope, with which he fluffs with alacrity cotton stuffing of mattresses and furniture that has gotten compressed with time and usage. 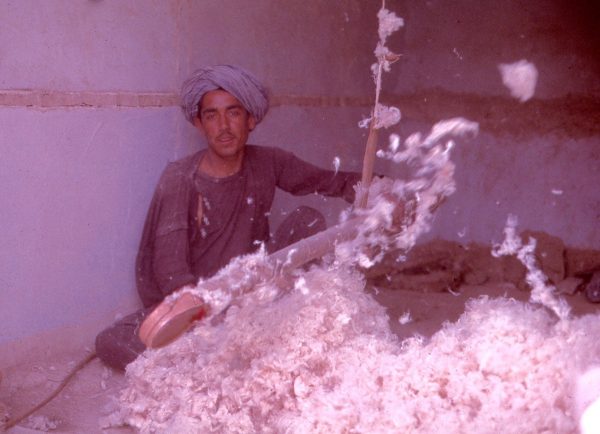 Such occupation never caught on in this country, but the innards of grandson’s beloved Catapee likely would have benefited from such reconstitution.
***
Not long ago, as he does with some irregularity, grandson stayed overnight with me and slept in the sleigh bed he’s convinced misses him when he’s not there, under a purple blanket to which he and I are both partial. Almost as active by night as by day, he roams much of the surface of the comforter in his sleep. I have given up trying to keep him under purple and, instead, keep the heat on during nighttime, hoping he won’t take a chill. I usually check him at least once while he sleeps the sleep of the dead. His forehead is always warm.
His departure for home was marked, as it often is, by haste. I try to have his things gathered and ready.
Not long thereafter, his father drove back to my house because, upon reaching home, they discovered Catapee was missing. They surmised it had been left at my house. Never mind that he had several others. It was the parable of the Lost Sheep all over again.
We combed the abode, which is not particularly spacious. No Catapee.
But then we found it, behind a sofa, in a comparatively small, cramped space, in which grandson likes to play and hide, and where he had taken Catapee, likely for company. Being an only child, he may be more keenly aware of being alone than some of his friends.
Some time later, on another stay, I mentioned his fondness for this particular Catapee. I told him that that is the way it is with God. He loves not just those that look better. He also loves those less wonderful on the surface – the Catapees with damaged stuffing, whose colors have faded. Indeed, those might be His favorites. Grandson commented, “No one’s perfect.” His kind heart does not go unnoticed.
***
I have a couple ferrite buzz magnets, black and elliptical, and polished to resemble hematite. Each is polarized, with north and south pole. I don’t recall where or when I acquired them, but, seeing how taken grandson is with them, I’m glad I have them. It’s nice to have something he lacks at home.

Their magnetic force is strong, and a source of wonderment. Grandson likes to place them on opposites sides of various thickness materials to assess the strength of magnetism Retention on both sides of paper, or slim magazine, is predictably easy. But the force also penetrates thicker material, including human tissue, such as a hand, and other things made of plastic or wood.
Spinning one of the rattlesnake egg magnets (so called because, under certain conditions, they will emit a buzzing sound when colliding) and influencing its trajectory by the other magnet causes not a little delight.
A metal four-drawer filing cabinet sits in my den. Grandson placed one of the magnets on the vertical front of one drawer. He knows about gravity, how all things fall. But – wonder of wonders – this particular magnet adhered to the surface and did not fall. It defied gravity. Even when spun, as a top.
Under certain circumstance, the force of magnetism is greater than that of gravity. I told him that divine power is like that. It can overcome many things, including laws of nature that normally apply.
Examples of such power abound in Holy Writ. The parting of the Red Sea. The lost axe head that floated to the water’s surface (II Kings 6:1-7). The sun ‘standing still’ for Joshua. Those healed of leprosy. And, most astonishing, the dead being brought back to life.
The natural order of things can be reversed by the One who ordained that order.
Grandson is fascinated by oddities. Conjoined twins and animals. Infants afflicted with microcephaly, with not much above the eye line. I tell him some of these babies were born to mothers with Zika virus, often transmitted by mosquitoes. These situations are tragic; the babies will never have normal intelligence, including memory. He agrees all of his classmates have normal-sized heads.
We talk about memory.
Some of my in-laws have had dementia. One still does. I remind him of her. She attended a milestone birthday of her husband not long ago. Grandson was there; he helped distribute birthday cake to attendees. I show him a photo of his great aunt on my computer.
I tell him that some of her adult sons feel as if they’ve lost their mother. Which, in a sense, they have.
For memory is what distinguishes us. I ask him what it would be like if his friends didn’t remember him, or vice-versa. I mention some by name. He becomes quiet.
I ask him how he would feel if his mother, my daughter, didn’t remember him. He would hug her and say, ‘Mommy, mommy,’ and she might say, ‘Who are you, little boy? Do I know you?’
His eyes fill as he considers how inconsolably sad that would be.
***
Early onset dementia is not merely the product of an overactive imagination. It is a reality in certain places. A 60 MINUTES airing on Alzheimer’s disease (the form most of us think of when we contemplate dementia) focused on the mountainous town of Yarumal in Columbia, where a genetic mutation on chromosome 14 causes dementia as early as age 40. Half the populace seems affected. It is a devastating affliction, relentless and incurable.
Lamentations 3:22 comes to mind.
***
Holy Writ contains many examples of remembrance. The altars, the Sabbath, communion, the cross. All to jog memory, which has been a hallmark of humans since time began.
I hope grandson’s memory will be such that, when the time is appropriate, it can be called upon to remind him who he is, where he came from, and where he is hopefully headed.