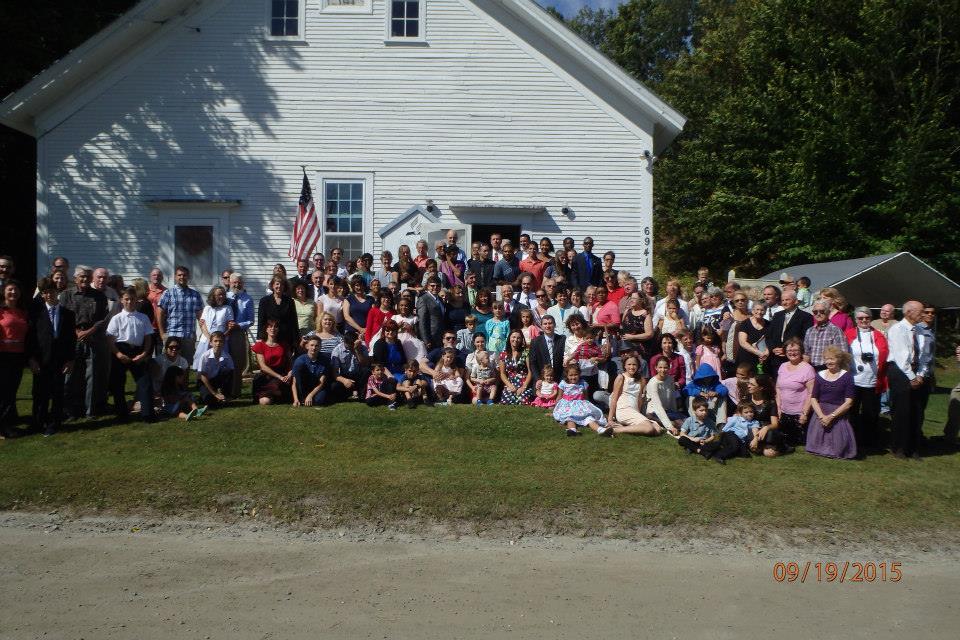 On September 19, 2015, the Bordoville Adventist Church, Bordoville, Vermont, had a very special annual meeting. It was the church’s 175th anniversary. This church is the oldest in the denomination that was actually built as an Adventist church from its beginning.

The story is a fascinating one, its first glimmerings related in this letter written in 1868 by one of the church’s founders. I have quoted most of the long letter, so if you don’t love history as much as I do, feel free to skim. I have also set off in italics the most pertinent paragraphs. My notes are in square brackets.

What I left out was Bourdeau’s statement of Adventist beliefs, which are interesting in themselves and which you can read by clicking the link. I was most interested in #7 of his list, which states: “We hold to baptism by immersion; to the ordinances of the Lord’s house, to praying in public and in secret; to all speaking in meetings, etc.” {Emphasis mine.] Bordeau does not mention gender, but it is known that at this time in the history of the church women evangelists were many in number and influence, and were founding churches in New York, Pennsylvania, Ohio, and other places. Another interesting item was “Systematic Benevolence—which consists in having members of churches pay 2 cents per week on each $100 they own, and each from 1 cent to 25 cents per week personal donation, as the Lord has prospered.” This is significantly different from the 10% tithe the church requires today—perhaps adopted later?

This letter was written to someone collecting Vermont history, which ultimately was published in The Vermont Historical Gazetteer: A Magazine Embracing the History of Each Town, Vol. 2, edited and published by Abby Maria Hemenway, in 1871. This gazetteer is now available online. I learned about the letter from the Bordoville Church Facebook page, where you can also see more nice photos of the anniversary event.

A Letter from Rev. A. C. Bourdeau

Dear Sir: If I understand Mr. Emery right, you wish to have me give you some statements about the first settlers on West hill, and the rise and progress of the society of the Seventh-Day Adventists of Enosburgh.

“I present you the following brief statements:

Augustus Bourdeau, my father, was one of the first settlers. He cut down the first tree to build his Chantier, [possibly name of house or estate?] and settled on this hill in 1835, on the same farm where he now resides. My parents are French Canadians; have brought up two sons and one daughter; embraced the Protestant religion in 1840; and soon after were immersed and joined the church. They trained up their children in the fear of God, who all united with the church at a very early age, and have held fast their faith with their parents ever since.

In 1856 I took to examining the subject of the Sabbath, embraced the Seventh-day Sabbath in the month of March of that year. I soon adopted the views of the Seventh-day Adventists, who then were a very few and scattered people; but now number about 20,000 in the United States. [There follows a brief statement of the “leading views of our people.”]

Soon after I adopted these views in 1856, several of my relatives and friends joined with me on the sabbath (sic). My brother, D. T. Bourdeau, who was then teaching and preaching among the French Baptists in Canada, also embraced our views. In 1860 we organized a church of 11 members in this place. The next year we set down our figures on Systematic Benevolence, amounting to about $50,00. [$50.00 in American notation.] We continued to have accessions to the church, and in 1856 there were 43 in the organization in this place, who paid on S. B. $305,00; completed a house of worship 35 by 48, which we had commenced to erect the previous year, and built a shed 120 feet long, for which the church paid in full.

“For 3 years we have had, and now have a flourishing Bible-class and Sabbath-school of about 50 scholars; and two regular weekly prayer and social meetings, on Tuesday and Friday evenings, besides meetings every Sabbath. I am the active minister. [Italics are his; I am unsure what they—perhaps more evidence that they “held to…all speaking”?] The officers of the church are 2 local elders, 2 deacons, a clerk, and a S. B. treasurer.

“I would add here that there are nearly 300 S. D. Adventists in Vermont, 4 ministers, 2 licentiates. Theses have built 3 meeting-houses, and another one is being erected. I labor in this State and Canada. Written in haste.

Out of curiosity, I called the Upper New England Conference and asked for present statistics. They now report 736 members in 14 churches in Vermont.

To learn more about the Bordoville church today (it would be interesting to know when and how the spelling was changed) read this report by Scott Christiansen, communication director of the Northern New England Conference. It was published last month in the Gleaner.

Bordoville Adventist Church in Bordoville, Vermont, is the oldest purpose-built church in the denomination. In other words, it is the oldest Adventist church that was built as an Adventist church. This living piece of history had its annual meeting on Sabbath, September 19. The service was attended by some 230 people, who gathered in perfect late-summer weather to hear the Sabbath School lesson and sermon by special guest speaker Philip Samaan, professor of religion and spirituality at Southern Adventist University in Collegedale, Tennessee. There was a very specific reason that Samaan traveled from Tennessee to Bordoville to speak. Above and beyond the delight of speaking at the oldest purpose-built church in the denomination, there was the fact that Samaan is the mentor and former professor of Cornel Preda, pastor of the Bordoville church. And, in the afternoon of this high Sabbath, Samaan would participate in Preda’s ordination and would lay upon him the ordination mantle. As it turned out, Samaan is also the former professor of conference president Bob Cundiff and conference executive secretary Ted Huskins, both of whom were present for the day. Samaan enjoyed teasing his former students and “grading” them on various tasks through the day. He may have focused his wit on his former students, but with his personable speaking style, it wasn’t long before he made everyone in the congregation feel very comfortable. Preda officiated over the annual meeting and told the story of the Bordoville church, which was built through the determination of the Bordo brothers, Augustine and Daniel, who were new converts to Adventism. The Bordoville church, located in the countryside and quite close to the Canadian border, turned out to be a frequent destination for such Adventist pioneers as James and Ellen White, who both spoke there on numerous occasions. The church was the launching pad for several missionaries, not the least of which were the Bordo brothers, who worked in Europe with missionary pioneer J. N. Andrews. The Bordo church entered a slow decline late in the last century and was not being used for services when Cornell took over the district a few years ago. Today, some 15-20 people typically meet there on Sabbath afternoon during the seasons when the unheated church is usable. The spirit is moving in Bordoville again and this last year the church saw five baptisms. The Bordoville church has been brought back from disuse through dedicated volunteer labor put forth by a small band of volunteers led by Preda. This band has a big vision for restoring the historic church and they have the enthusiastic support of the recently established Historic Properties Committee at the conference. The building needs a very significant amount of work done over the next few years, and if the Lord prompts you to support or volunteer for this effort, contact Cornell Preda or Ted Huskins at the conference office. Whether or not you are called by the Lord to help restore this historic church, you really should plan to visit the Bordoville church annual meeting that is held every year in September. This little church on a dirt road in the countryside is a piece of living history, built with the hands of some of the first members of the Adventist denomination and, praise God, it still serves as a light for the community around it.