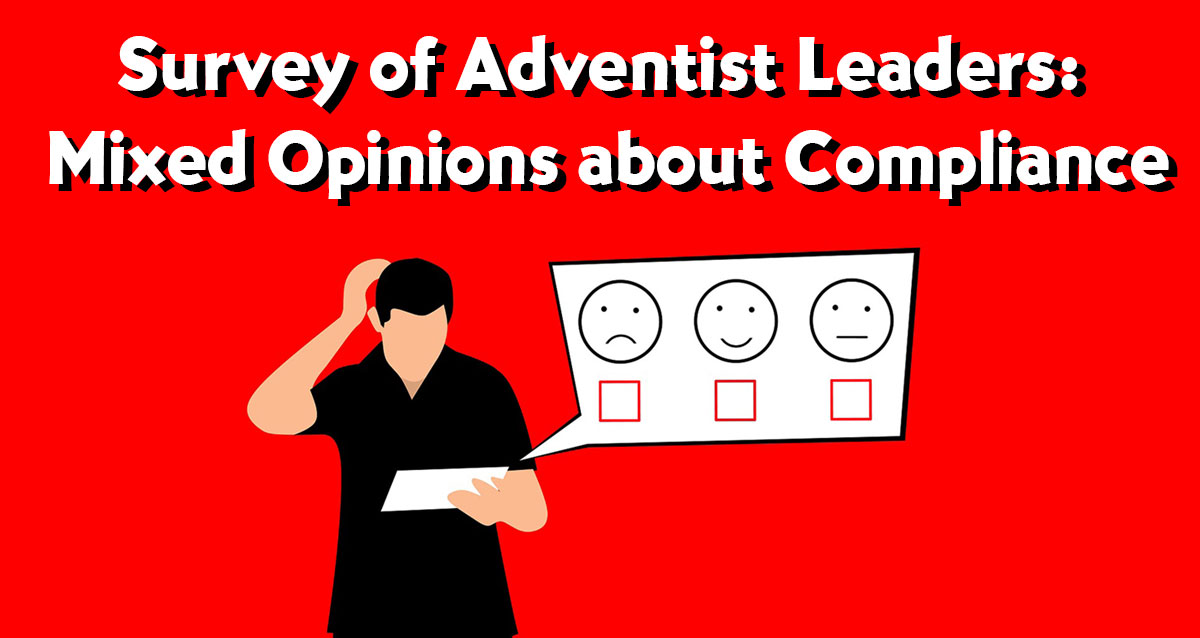 25 March 2018  |  The majority of the presidents of the world divisions and union conferences did not support two of six proposed methods for dealing with those who are “not in compliance with voted actions of General Conference (GC) Sessions” and the denomination’s governing body in a survey conducted between January 18 and March 4. The majority did agree that there should be “organizational consequences” of an unspecified nature, including possibly removing their vote in the governing body and membership on key committees.

The results of the survey were released on Friday (March 23) through the web site of the Adventist Review. It included responses from the 14 division presidents and the 137 union presidents; the 151 men who lead the major units of the Adventist denomination around the world and are most directly involved in the ongoing tensions over “non-compliance” which center on the ordination of women clergy. The survey reveals how divided these leaders are on most of the questions they were asked.

AToday: Let’s start something new together!

In October last year a report from the Unity Oversight Committee on this topic was turned back by the annual meeting of the GC executive committee, the denomination’s governing board because of dissatisfaction with some of the proposals and questions about the constitutionality of the entire plan. The Unity Oversight Committee met again in December and request that the survey be conducted by the GC Archives, Statistics and Research office (ASTR).

Very rarely in the history of the denomination has the GC executive committee adopted policies or taken actions with such divided votes as those revealed in the four questions above. There was greater unanimity on the first two questions in the survey.

The survey make no attempt to identify which voted actions might be involved in the proposals it asked about, nor did it ask about any process by which decisions would be made as to which voted actions would result in non-compliance activities. There are potentially a large number of voted actions at GC Sessions and annual meetings of the GC executive committee that might be included if there is equity in such decisions. For example, when the 1990 GC Session first voted not to ordain women clergy, it also voted to include women among the ordained local elders, and there are places in the world where units of the denomination have voted not to allow women to be ordained local elders. Are these to be treated as instances of “non-compliance” if these proposals go forward?

During the annual meeting last October it was revealed that four out of five audits by the GC Auditing Service (GCAS) find instances of non-compliance with the GC Working Policy. Are all of these hundreds of cases to be dealt with in the same way? If not, who will make the decision as to which non-compliances to ignore and which to challenge? It is not clear if the Unity Oversight Committee has any intention of addressing these questions.

The survey did not ask about the constitutional issues that surround this topic. There is no statement in the GC constitution or bylaws that explicitly gives the GC authority to enforce consequences on leaders or union conferences or local conferences that are not in compliance with voted actions.

The survey also did not explore the complications of situations where a union conference president is not personally responsible for the non-compliance of his organization, where it may have voted against the ordination of women clergy but the union conference executive committee or constituency session has voted to do so.

The issue of ordaining women clergy continues to be very controversial in the Adventist denomination despite the fact that since the 1970s three major panels of Bible scholars have reported that there is nothing in Scripture or Adventist heritage that prohibits the practice. In fact, as early as 1881 a GC Session voted to approve the concept and referred it to the GC executive committee to be implemented. Although there is no record of any opposition among denominational leaders, the decision was never implemented. A few people argue that this means it was not actually approved, although it is clear from numerous records that a number of local conferences issued the Ministerial License to women pastors in the aftermath. That license has always been understood as the first step toward ordination.

It is also true that Ellen G. White was issued the Ordained Minister credential by repeated votes of GC Sessions and GC executive committees over many years. A number of scholars from various faiths have observed that is strange that a denomination founded by a woman who it understands to have exercised the prophetic gift is still hung up on this issue.