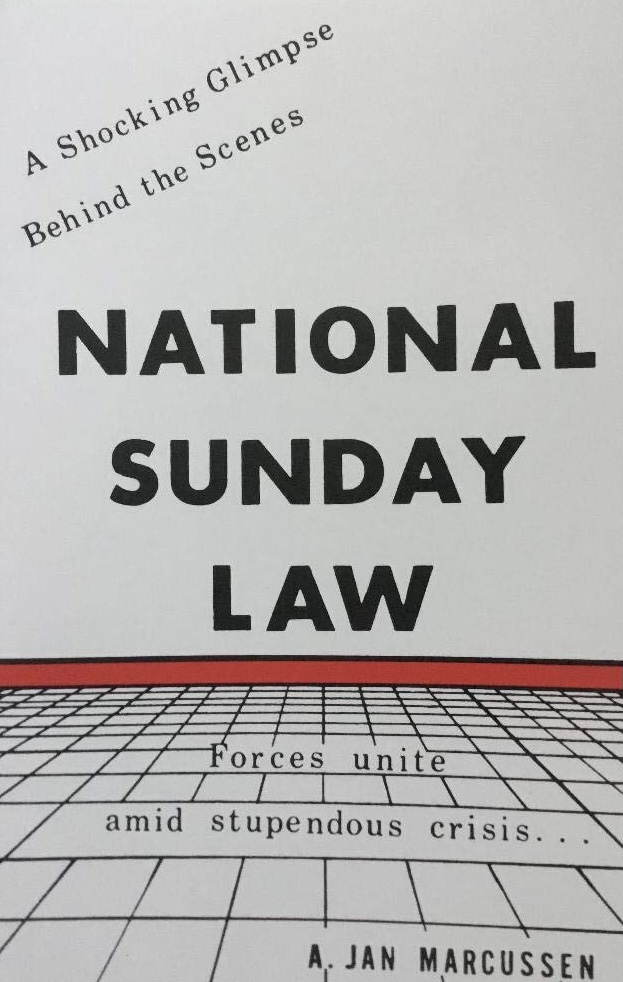 In a March 9 article, New Zealand’s Stuff news site published the complaint of a woman from Lower Hutt, a city in the Wellington Region of New Zealand’s North Island, whose 11-year-old daughter was being asked to distribute a religious book about the Sunday Law on her paper route.

Haley Rivas Herrera​ described National Sunday Law as containing “a conspiracy theory” and “extreme propaganda.” She said she would be burning the volumes in her possession.

National Sunday Law, written by Adventist author A. Jan Marcussen, is wildly popular among some Adventists, with over 48 million copies in circulation. Marcussen was ordained as an Adventist minister in 1982.

National Sunday Law offers an interpretation of the prophecies of Daniel and Revelation, with a special focus on the Three Angels’ Messages of Revelation 14.

“The book by A Jan Marcussen​ is connected with an independent group of the Seventh-Day Adventist Church and is not endorsed by the New Zealand church. It alleges impending laws limiting religious freedom are being enacted by the United States Government, and attacks the Catholic Church,” says Stuff.

The books were included with advertising material for restaurants and other businesses that children delivered as part of their paper route for distributor Ovato.

According to Stuff, Rivas Herrera called the deliveries insidious, as they were unsolicited and some recipients are vulnerable following lockdown.

Ovato did not respond to requests for comment from Stuff.

“The books are published by an organisation called the NSL Project. Stuff called a number listed in the book that was answered by a man who identified himself only as Brent,” said the article.

Will you give a donation to Adventist Today?
Stuff reached out to Bob Larsen​, a North Island Adventist pastor who said the book was not endorsed by the Seventh-day Adventist denomination.

“The [church] had no involvement in the publication or distribution of the book … The church does not endorse or recommend this book,” said Larsen.

Right-wing independent Adventist publication Advent Messenger responded to this comment in an article entitled “The Adventist Church Disavows the National Sunday Law book as it is Labeled by the Media as Insidious, Extreme Propaganda, a Conspiracy Theory and Threatened with Burning”:

Where is the spirit of religious liberty? Where are the religious liberty leaders? This is an affront to both civil and religious freedoms. The National Sunday Law books exalt Saturday, the 7th day, as God’s true Sabbath, and warns against any attempt to enforce Sunday as the day of worship by law. What’s wrong with this message? Why can’t the church defend our historic message when under attack, just as it does when speaking up for critical racial theories, climate change, gender inclusion and other liberal causes?

Advent Messenger goes on to predict the General Conference will not get involved in the issue:

We are witnessing the cancel culture and the denial of free speech and freedom to practice one’s faith. Evangelism is part of who we are as Seventh-day Adventists, and the freedom to speak and practice our faith is an inherent human right. Will the General Conference of Seventh-day Adventists send (Director of Public Affairs and Religious Liberty) Ganoune Diop to defend our human rights to share the Three Angels’ Message? Don’t count on it. He’s too busy defending everyone else except our faithful believers. The local church has already disavowed the books. They claim that they do not “endorse or recommend the books.” Basically the church in New Zealand is saying that they don’t recommend the Three Angels’ Messages or the Seventh-day Sabbath to anyone.