English Bibles have a mistranslation that needs to be corrected.

Humans usually have 24 ribs.  The ribs come from the 12 thoracic vertebra (back bones) and provide support and protection for the chest and its contents.  The top 7 pair are attached by cartilage directly to the sternum (breast bone) in the front of the chest.  Three of the next five are attached indirectly to the sternum through an arch of cartilage that forms the upper margins of your abdomen and an attachment for your thin flexible breathing muscle, or diaphragm.  The last two ribs of the bottom five are often not attached and hence can be called “floating” ribs, although all 12 pair of ribs are attached to each other by the several layers of intercostal muscles and connective tissue called fasciae, or on the inside of the chest, pleura. 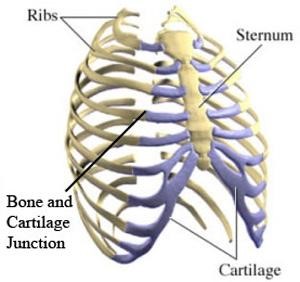 When you take a breath, the intercostal muscles between the ribs contract to pull the ribs up and out, at the same time that the diaphragm contracts and flattens pulling down, together inflating your lungs.

The Creator used the vertebra/rib design in many Bilateria (creatures with a right and left half, as opposed to round animals like jellyfish or sponges that don’t have two equal halves).  Dogs have 13 pairs of ribs; snakes, of course, have many more, but frogs only have one pair.  The turtle’s eight ribs are made to fuse into its shell.  Fish have two ribs on each vertebra: dorsal and ventral ribs.  But sharks only have short ventral bony ribs, with the rest cartilage, and lampreys have no ribs at all.

The King James Bible translates a Hebrew word for “fifth”(chomesh from chamesh, five)  as “fifth rib,” as a lethal point of entry for killing.  “Under the fifth” of the top 7 ribs on the left would put your sword or spear into the heart.  “Under the five” lower ribs would put you into the “belly” (as most modern translations prefer); either entry would be quite lethal.  Abner, Saul’s general, killed the brother of David’s general Joab, named Asahel (2 Samuel 2).  Then Joab killed Abner (2 Samuel 3).  After Abner died, two of Saul’s soldiers murdered their master, Saul’s surviving son Ishbosheth (2 Samuel 4), mistakenly thinking to curry David’s favor.  Finally, Joab dispatched his own cousin Amasa who had joined Absalom in rebellion against David (2 Samuel 20).  All died using the same lethal method:  “and smote him there under the fifth [rib], that he died.” 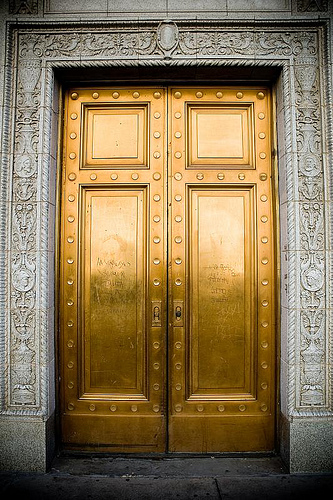 There a proper anatomical word for “rib,” the Aramaic ala, that appears in Daniel 7:5 where the Bear of Medo-Persia has three of them in his mouth.
But there is another Hebrew word in the Bible, tsela,  that 40 times means “side,” as in one of two sides or halves – as in “siding” planks of cedar in 1 Kings 6:15.  Or as the two “sides” of the Ark of the Covenant with rings for carrying poles on each of its two “sides,” in Exodus 37:3.  Or as rooms along one “side” or the other (north or south “sides”) of the Temple of Ezekiel 41:5,11.  The Table of Showbread was on the north “side” or “half” of the Holy Place (Exodus 26:35).  Or two cedar “halves” or “sides” of a split door leading into Solomon’s Temple.  Each “half” or “side” (tsela) of the split door was covered with carved “ cherubim, palm trees, and open flowers; and… overlaid… with gold” (1 Kings 6:33,34).  The two sides or half panels made one entrance into the Holy Place.

So why, in Genesis 2:21-22, where it says God took one “tsela” of Adam, does the English translation say a “rib” instead of one of his two “sides?”  Or instead of one of the two “halves” of the bilateral first human?  This mistranslation starting with Wycliffe through the King James Version has been entrenched in most English Bibles.[1]  But the word “side” makes wonderful sense to understand that woman was not 1/24th of a man, but one half.

The deep sleep (Genesis 2:21) that God put Adam into as introduction to his life partner was not surgical anesthesia.  It was a dream or trance like the one God put Abram into (see Genesis 15) so God could reveal to Abram in a dream His one-sided covenant of grace.  Here Abram divided a 3-year-old virgin cow, a 3-year-old female goat, and a 3-year-old male sheep into 2 halves each, and placed one half on one side, and the other half on the other side.  Then Abram too fell into a deep sleep-like trance, and God revealed Himself in Abram’s dream as a moving pillar of cloud and pillar of fire through the two halves of the bilateral animals, the right and left halves.  To Abram this meant God was taking a solemn oath, making a promise that must be kept, offering himself to be hewn asunder if He did not keep His word.

So Adam’s deep sleep was not surgical anesthesia; it was a trance, a spiritual dream where he saw himself hewn asunder, and one of his “sides” (not merely one little rib), one half of him, turned into the woman he would shortly be introduced to.  God revealed to Adam in this trance that Woman was his side, his half, his equal.  When Adam awoke from the dream sleep, he understood that Eve was not just his little rib, but “bone of my bones and flesh of my flesh,” his side, his half, flesh and bones all together.

Animals, like man, were formed of chemistry. “God formed from the soil every living thing of the field and every fowl of the heavens” (Genesis 2:19).  Man was alike mortal, chemical, “formed of dust from the soil” (Genesis 2:7) and also given the breath of life.  This “formed of dust” is not a scientific explanation of how chemistry became biochemistry, how biochemistry became complex cells, and how cells became living beings.  It is a statement of our mortality, our earthiness.  Dust we are, and except by the grace of God and access to the Tree of Life, dust we will become.

So the dream of Adam is not a scientific explanation of woman’s origin; it is a God-given vision of woman’s place in the order of creation.  Although mortal, as animals and men, she is half of humanity, she is one side of mankind’s two sides.   She is not a rib, she is one of the two sides that make a human, an equal partner.

What does a human look like?  Here is a picture of a human as presented by the Genesis 2 creation of mankind story–male and female, two equal halves of humanity, side by side.

NJV[2] Genesis 2 Translated as Side.

YHWH, God, formed the human of dust from the soil,
he blew into his nostrils the breath of life
and the human became a living being.
YHWH, God, planted a garden in Eden, in the east,
and there he placed the human…
But YHWH, God, said it is not good for the human to be alone,
I will make him an equal helper.
So he had the human name all the other animals formed from the soil,
but found no equal helper for himself.
So YHWH, God, put the human into a trance where he saw God
take one of his two sides and close up the flesh.
And YHWH, God, turned this half of man into woman and
brought her to the man, who exclaimed,
“At last, finally, this is what I have been waiting for!
Bone of my bones, flesh of my flesh!
She shall be called ISHA (woman)
because from ISH (man) she was taken.”
Therefore men leave parents and join with a woman,
for they are really two sides of one flesh.

Ellen White can also be read (omitting the “rib” mistranslation) in complete harmony with woman as coming from the side or half of man.

“Eve was created…from the SIDE of Adam, signifying that she was not to control him as the head, nor to be trampled under his feet as an inferior, but to stand by his SIDE as an equal…A part of man, bone of his bone, and flesh of his flesh, she was his second self, showing the close union and the affectionate attachment that should exist in this relation…they shall be one.”[3]

Many male lips have “ribbed” women, and it helps me to understand that the translation error has served to diminish women from their equality, at creation, with men.  My sisters are not a rib; they are my equals.

A man with a paralyzed side is a cripple, having hemiplegia, as seen in some stroke victims.  Like Jacob, whose hip was dislocated in struggling with God, he ever after limps along needing a crutch.  Till the end of his life Jacob was disabled by loss of one of his sides in that battle, and till the day of his death, worshiped leaning on a crutch.[4]

The male headship heresy promoted by some of my brothers should be challenged not only as un-Christ-like, but also an un-Biblical view of female diminution.  Genesis 2 teaches that humans were created mortal (like animals, from dust), and that women were created equal to men
(half of Adam).  This is in full harmony with the Genesis 1 account where the image of God is male and female.

A  church that does not recognize women’s full equality in service will be hemiplegic, crippled with one weak side, limping along on crutches instead of running quickly towards the kingdom.  How can an Adventist church founded by a woman of God not understand this?

John Mark Reynolds, Provost of Huston Baptist University, is quoted in Christianity Today with this insight.  “If Genesis is true—if you believe male and female are deep categories that are tied to the creation of humankind and the image of God—then to fail to hear a woman’s voice on a topic would be to fail to hear something the Holy Spirit is saying to our generation.”[5]

Please feel free to copy or share (by clicking below)
this article with family and interested friends.

Thank you for the comments, they are now closed.  If you would like to correspond with the author please feel free to contact him at drhoehn @ msn.com.