By S M Chen, posted Feb. 16, 2017     It is not recorded in Holy Writ just how Enoch was translated without tasting death. It was after he became a father at age 65 that his walk with divinity became closer (exemplifying this syllogism: father:child::God:man). He lived on Earth another 300 years. Considering that Adam lived to 930, Enoch was likely in the prime of life – perhaps equivalent to someone in their 30s today.

There were some, both righteous and wicked, who witnessed his departure and thought he had been transported to another earthly place.1 Loved ones searched diligently for him after his disappearance, to no avail. This suggests that his departure was not marked by clarity as to his ultimate destination, or else the loved ones who searched did not see him depart. What happened to his family – his wife, his offspring? Did they know what became of him?

Was his leaving similar to Elijah’s, in a chariot?

He was the 7th from Adam. 7 is a number (among others) that appears multiple times in Holy Writ and may be significant.

Another such fortunate individual was the prophet Elijah. He is recorded to have left Earth in a chariot of fire drawn by horses of fire, in a whirlwind.

Who else besides Elisha, his successor, witnessed his departure we are not told. However, 50 men did search for him for three days, without success. Elisha told them afterward the Biblical equivalent of “I told you so.” They must not have seen the chariot which bore him aloft until he could be seen no more. One would not easily forget such a stupendous event.

Moses did die. Of exactly what we are not told. His vision and vitality were undiminished at age 120, when he viewed the Promised Land from the top of Mount Nebo.

It must have been with heavy heart that he viewed a place he had so diligently sought to enter but, instead, wandered 40 years in the wilderness with a multitude whose recalcitrance might have taxed the patience of Job.

However, he was comforted with a vision as to what would come later (EGW, Patriarchs and Prophets), including his future participation in the transfiguration of Christ.2 Why Enoch was not present at that event is uncertain.

His resurrection, the first such recorded, was an astonishing event in which Satan, who sought to keep Moses in the grave, was rebuked by Christ, who refused to enter into controversy but, rather, simply exercised his power over the grave.

Again, as with most other instances of those departing Earth, we are not told how Moses was translated. Was it in a fiery chariot? We can only speculate. God has means of which we are only dimly aware, being limited as we are by puny imagination.

Upon Christ’s death at Golgotha, when the temple curtain was rent and an earthquake opened graves, certain others were resurrected (Matthew 27:52, 53). They presumably ascended from Earth after Christ was resurrected. How they departed Earth we are not told. Perhaps it was in like manner as He did – simply rising from terra firma, reminding of the verse: “O death, where is thy sting? O grave, where is thy victory?” (I Cor. 15:55). What might have been added, had “gravity” been in the vernacular: “O gravity, where is thy hold?” 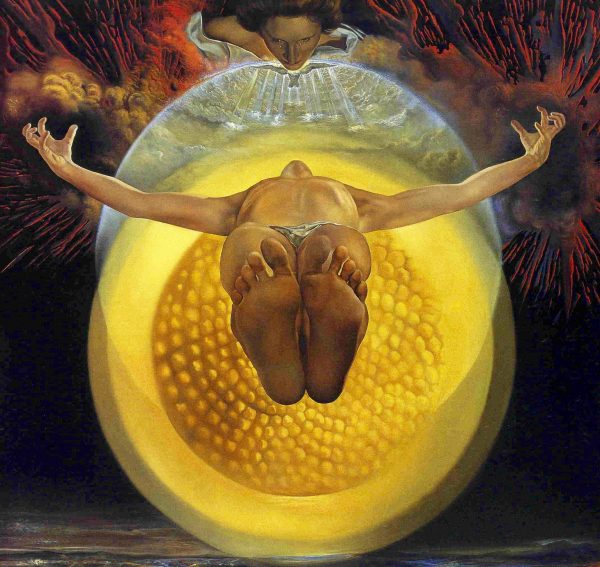 What events such as these tell us is that natural laws which govern Earth (and at least part of the universe) can be abrogated by the Lawgiver. The created, when called upon to do so, yields to the Creator.

Five loaves and two fishes feed 5000 – with twelve baskets left over. Not quite creation ex nihilo, but close.

Water transforms into wine so fine party attendees acknowledge its superiority to its antecedent. My father, an amateur magician as well as chemist, used to regale audiences by turning “water” into “wine.” While a delightful visual, unlike what happened in Cana, neither liquid was potable.

A storm calms to a verbal command. It seems the elements do have ears.

Demons depart when commanded by someone they recognize. At times they pass from humans to animals (is modern H1N1 swine flu merely payback?); other times they just seem to vanish. But perhaps they never really vanish; they just await another susceptible victim to occupy.

The Red Sea parts. While Holy Writ records causation of that event (“a strong east wind all that night”), the wind appears to have been extremely focused (as a tornado), with great force. And it responded to the rod of Moses.

The Jordan River parts when struck by a mantle. There is no record here of a strong wind. Or of any wind, for that matter.

Water springs from a rock.

Water can be walked upon. The only water some of us have walked on is in the form of ice (or snow). Water is one substance easily imagined in all 3 forms (solid: ice; liquid: water; gas: steam).

A man rides a chariot of fire and does not burn. Was he wearing something akin to asbestos? It’s doubtful.

A bush burns but is not consumed. Were it impervious to burning, it would not be consumed; but then, it wouldn’t burn, either. [Why do “flammable” and “inflammable” have identical meaning?]

All the snake bitten have to do to live is gaze upon a bronze serpent. One might invoke a placebo effect, but argument for such is frail.

Manna falls in a remarkable manner: not too much, not too little; just right.

The blind see, the lame walk.

Bad water becomes potable when a branch or salt is cast therein.

Dreams are not only interpreted (correctly), they’re recalled by the interpreter. One can readily sympathize with Nebuchadnezzar; it’s hard enough to recall some dreams right after one’s had them, let alone the next day, by which time both sleep and dream have fled.

A donkey talks. Some of us talk to pets. They may talk back to us (who knows?) but we don’t understand them. Once in a while, along comes a dog whisperer. Dr. Doolittle, where art thou?

All manner of animals board a gopher wood barge in orderly fashion.

Hungry lions fail to sink their fangs into a man thrown into their den.

A proud king descends into insanity, loses the throne then, after 7 years, regains both sanity and throne.

An apostle survives being cast into a cauldron of burning oil.

A great fish/whale swallows a man, then spews him onto dry land after 3 days.

Angels walk among us.

A man tells a woman her salient past history, including five husbands (and the one she is with now isn’t number six). How did He know? He must have tapped into a well of information not accessible to most of us.

One man dies, that all might live. The closest thing that comes to mind (and it pales in comparison) is the encounter between the Israelites and the Philistines (I Samuel 17). Rather than thousands (or even more) of men dying in battle, the Philistines suggest that their champion fight an Israelite. Samson was a mere memory; there was no Israeli strongman. The only Israelite willing to face Goliath was David. It was as if, rather than a protracted Trojan war between Greeks and Trojans, Hector and Achilles fought, the winner to determine the outcome of the conflict, and Helen, over whom the war started, would either stay with Paris in Troy or return to her husband, Menelaus. While doubtless more civilized, such an initial duel would have made the blind poet Homer’s masterwork much shorter.

A heart of stone becomes one of flesh. We are still learning. When in medical school, I didn’t know of “broken-heart syndrome,” aka Takotsubo cardiomyopathy. This condition of nonischemic transient weakening of the left ventricle in response to severe stress was not described until 1990. It now appears that some might actually die from a broken heart, perhaps akin to “dying of fright.”

Is anything too hard for the Almighty?

It is up to us to determine our place in the vast cosmos, to connect the dots, if you will, with gratitude and humility.

But we are not alone.

Never have been, although, for many of us, it may have felt that way at times.

As a church founder wrote, “We have nothing to fear for the future except as we shall forget the way the Lord has led us… in our past.”3