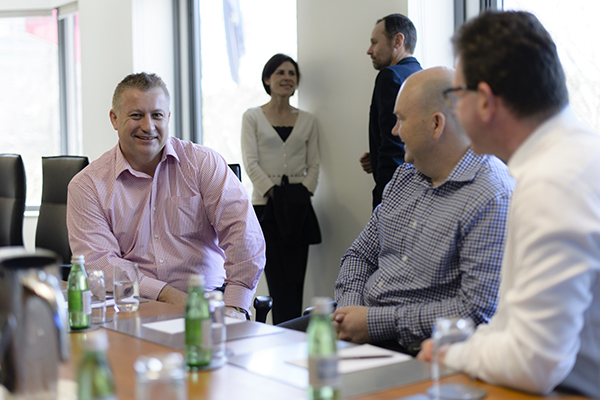 From News Release, July 4, 2016:    The Adventist denomination in Australia and New Zealand owns one of the largest food manufacturers in the two countries, known as Sanitarium Foods for many years and doing business now as Sanitarium Health and Wellbeing Company. It is a leader in the breakfast cereal industry because its Weet-Bix is the most popular product of this kind in that part of the world. It markets eight kinds of Weet-Bix plus 14 other dry cereals. It is also the top seller of soy milk and distributes peanut butter, yogurt, Granola, seven kinds of dairy alternatives, 12 kinds of meat substitutes and Marmite, a spread for toast and sandwiches which is famous down under and widely distributed in Europe. It generates $300 million a year (Australian) in revenue, but it is a nonprofit so its surplus goes to charity, not the religious activities of the church.

What started as a simple question to his high school teacher—“What do you think I’d be good at?”—turned into a life journey for New Zealand-born Todd Saunders. Then a student at Christchurch Adventist School and excelling in math, Saunders’ teacher Dr. Peter Kilgour (now a faculty member at Avondale College, the Adventist higher education institution in Australia) had suggested looking into a business career.

“I thought it was great advice,” says Saunders. “I loved the concept of buying and selling and trading, so that’s where the original inspiration came from.”

Now Saunders’ career has come full circle. Having graduated with a business degree in 1990, he is working once again for the company that gave him his first job after college. As Executive General Manager of Sanitarium Health and Wellbeing Company, Saunders is responsible for implementing plans he made just a few years ago in his role as Strategic Planning and Development Manager;“for my sins,” he says with a laugh.

But while Sanitarium has been a defining aspect of Saunders’ career, he is perhaps most useful to the company because he left.

Only six months into an accounting degree at the University of Canterbury, Saunders transferred to Avondale. He thrived there, finding “the good tension of being challenged” he had not found elsewhere. The determination of his lecturers to turn out first class business students helped him push himself harder.

His first job after graduating was at Sanitarium Health and Wellbeing, working first in its Cooranbong factory, then in Melbourne and in Tasmania in distribution centers. He was soon promoted to finance manager and transferred to the head office in Berkeley Vale, New South Wales. But while he loved his work, Saunders felt there was more to the business world that he had yet to experience. He ventured out, cofounding a management consultant business, Arbitrage Partners, in January 1998.

“I was getting closer to my 30s and I thought to myself, There’s more to my career than working for one employer my entire life,” Saunders says. “It was a good decision, because I gained so much. It’s been an interesting journey.”

The time away from his beginnings at Sanitarium exposed Saunders to an array of different companies in vastly different situations. Through Arbitrage Partners he helped establish Sony Ericsson’s first Australian mobile phone repair center and transferred all of Fisher & Paykel’s electronics manufacturing from New Zealand to Australia. At one point he was involved in negotiations over electronics use with the Norwegian Defense Force. He spent five years as the general manager of operations for Startronics.

Each opportunity was different from the last, and each came with its own lessons. Assessing companies and creating strategies on their behalf exposed Saunders to a wealth of information that could only be learned firsthand. But in 2009, Saunders decided it was time to return to the company he loved. He accepted a position as strategic planning and development manager for Sanitarium and, in 2011, moved into the role of general manager.

Being Executive General Manager is not a position Saunders takes lightly. As a leader of one of Australia’s most loved companies, he feels a responsibility not only to employees but also to the public. His background in managing organizational change has been crucial to guiding the company forward. Sanitarium has become primarily a beverages rather than a cereal company.

“Sanitarium has been around for over 100 years, and it’s probably facing its greatest change,” he says. “We’re having to adapt to the ‘snackification’ of the industry. People don’t sit down for breakfast as much anymore, and they’re looking for something quick to grab on the way out the door. Tastes are changing, and we’re doing our best to meet those needs. But that means change.”

Communication, always communication. “You can never over communicate,” Saunders says. “Knowledge doesn’t suddenly appear by osmosis, and to assume it does is just foolish. You’ve got to be intentional with the way you communicate. If you can’t explain it in a simple, down-to-earth way, then you don’t understand your own strategy.”

“We see so many companies that acquire a business or change their direction without properly communicating to their own staff, and it fails and becomes some sort of organ transplant gone wrong. Without communication, staff just see the company turn and change around them—some may adapt and change with the company, but many will resist. When you invite everyone in your company to consider how they relate to that strategy, they have a chance to get on board.”

“People are intrigued by Sanitarium, and I’m proud to talk about the company,” he says. “When people see and understand the vision the church had in setting Sanitarium up, they get excited about it. It’s great to see other industry leaders really respect what we have been able to achieve and what we stand for.”

And as far as the future is concerned, chances are Saunders’ Sanitarium career has many chapters left. “I’ll be there as long as I enjoy it,” he laughs. “A sense of enjoyment is an important reason to turn up for work, and that’s what I’m passionate about creating in the workplace.”

The news release was written by Sara Bolst in the Avondale College public relations office. The editors of Adventist Today added the introductory paragraph and edited this article. The feature photo with this article shows Todd Saunders on the left.