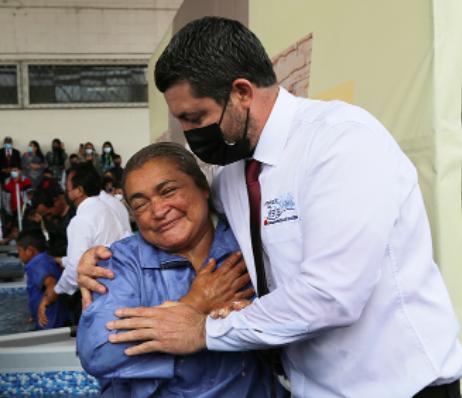 Thy Roddy and Thy Staff, They Comfort Me

Roddy is the first chaplain, and first woman, to be appointed as an associate director for NAD ACM. In 2019, Roddy joined the division after serving as associate pastor for the Loma Linda University Church in California from 2015 to 2019. She has served in several pastoral positions, as a conference ministry director, and as a chaplain in the NAD and South Pacific Division. She will continue to serve the chaplains in Columbia, Atlantic, and Lake unions, and the Adventist Church in Canada.

Suiting and Booting Up

The General Conference (GC) Children’s Ministries department has created a new app called “Armor of God” to help children learn and live out the principles taught in Ephesians chapter 6.

Within the app are six game elements that children can unlock, each focused on a different piece of armor from the Ephesians 6 analogy. In-app games include word searches, jigsaw puzzles, coloring-in activities, memory verses, felts and stickers, and singalongs. The sticker game—based on felt boards from children’s Sabbath schools popular in the 1990s and 2000s—allows children to select a background and then add digital stickers to construct a whole scene.

That Must’ve Been a Big Baptismal Tank

More than 21,000 new believers joined the Seventh-day Adventist Church during a two-week evangelistic series that swept through the Dominican Republic, Panama, Costa Rica, Nicaragua, Honduras, El Salvador, and Guatemala from March 25 through April 9, 2022. Crowds gathered in large churches, auditoriums, sports fields, outdoor stadiums, and watched online. “Don’t Give Up, There Is Still Hope” was the resounding message heard throughout the seven countries by the keynote speaker Melchor Ferreyra, personal ministries director for the church in Inter-America. Ferreyra reminded viewers and listeners every evening that through difficult times, God is near.

Nemanja Jurišić, a 25-year-old electrical engineering student in Serbia, started his Instagram account “Prorocanstva” (Prophesies) three years ago. Today, nearly 5,000 people follow him on Instagram. Supported with guidance from local pastors, they partnered with him and gave Bible studies to his Instagram followers. They even went live on Instagram to preach and distributed free books such as The Great Controversy and the Bible.

Jurišić and the church leaders organised monthly meetings where teens could mingle and ask questions, which led to their first spiritual retreat in Zlatibor, Serbia. Almost 30 teens and young adults who had never stepped into an Adventist Church before attended the event. More than 10 people have been baptised thanks to the direct and indirect influence of this ministry.

Penang Adventist Hospital in Malaysia launched the first full-fledged private Nuclear Medicine Center in the Northern region recently. Nuclear Medicine imaging examinations focus on depicting physiologic processes within the body, instead of merely the structure. Doctors will now be able to have a clearer picture of the effect of the disease on patients and make better informed diagnostic decisions, while also delivering targeted treatments with even higher precision.

Daniel Passold Filho, a student at Blumenau Adventist School, won a silver and two bronze medals as part of the Brazilian national rowing team competing at the South American Rowing Tournament in Porto Alegre, Rio Grande do Sul, Brazil, in late March 2022. Passold Filho won the silver medal in the Junior category in coxless pair, one bronze in the coxless four, and another bronze in the octuple scull.

The South American Rowing Tournament marked the first time Passold Filho participated in a competition at the international level. His next goal is to be selected as part of the Brazilian team for the Rowing World Cup, which will take place in Italy in June 2022.

The Adventist Health Lodi Memorial facility in north Stockton, Calif., U.S., was damaged by a rooftop fire April 21, 2022. Fire crews responded to the call at 10200 Trinity Parkway about 3:45 p.m. and evacuated occupants from the multispecialty care building. The two-alarm fire was under control in about 30 minutes.

Stockton Fire Department Battalion Chief Bryan Carr said about 20 to 30 solar panels were on fire on the roof when fire crews arrived on the scene. “This is not something we usually see,” Carr said.

Carr said the cause of the fire is unknown and under investigation, and a representative from Adventist Health’s solar contractor had come on scene to look into a possible equipment failure. Adventist Health said the building would be closed until further notice due to interior water and smoke damage.

Eden Valley Academy is a Seventh-day Adventist mission school established in 1984 by an Australian missionary, Dr. Helen M. Hall. It aims to provide quality Adventist education to refugees along the Thai-Burma border. It is now located in the Maela refugee camp and has about 1,000 students.

Flooding and landslides are common occurrences in this region, especially during the typhoon season. Structural improvements are needed to strengthen the foundations of the buildings. New buildings are also needed to accommodate the growing population of the academy.

For those who want to send donations to help the school, please contact evahelenhall@gmail.com or visit https://www.facebook.com/edenvalleyacademy/.

A Light in the Dark

The Gambell Church is on the western tip of St. Lawrence Island in the Bering Sea. Roughly 200 miles southwest of Nome and 35 miles from Russia, it is one of the most isolated Adventist churches. Despite the remoteness, Gambell hosted a Rocky Railway Vacation Bible School. The decision was made to have the program during the dark cold days during Christmas and the new year, or “winter break,” when the children were out of school.

It was an opportunity to bring light to the few devout kids of Gambell, when daylight averages about four hours a day with short windows of twilight. On good-weather days, the church hosted seven kids. On bad-weather days, three children came to the light and shelter of the church, expressing praise and worship to our Creator.

(Photo: Silvia Avila, from Guatemala, smiles as she is embraced by Pastor Carvajal of the Central Guatemala Conference after her baptism on April 9, 2022. Avila was one of 21,000 new converts to the Seventh-day Adventist Church in Inter-America after a regional evangelistic campaign in the Dominican Republic and Central America from March 25, 2022, to April 9, 2022. Photo by Josue Laj/IAD.)