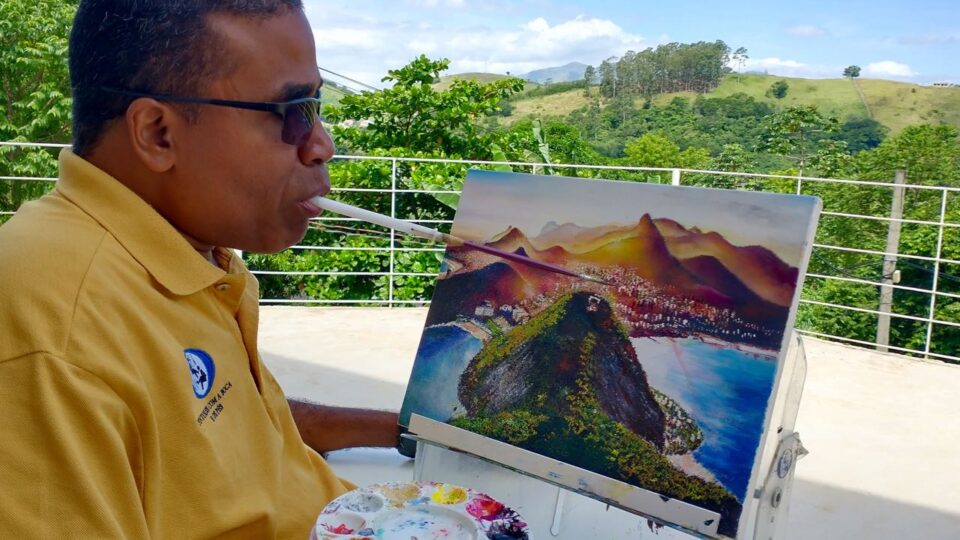 Hanging On for Dear Life

At the age of 21, Marcelo Cunha was an athlete and designer, until he suffered an accident during a dive, which left him a quardriplegic. He began painting with his mouth. Today, Cunha said his work has been reproduced and sold in more than 70 countries.

Cunha is also the director of the Mordomy and Sabbath School department of the Adventist church of Jardim Paulista in Rio de Janeiro, Brazil. He holds workshops encouraging young people to continue serving God even in the midst of difficulties.

“Diving into the artistic universe determined a change like I never imagined. As a result of a [mistake] in [the] water, I crashed and became quadriplegic. Unable to fulfill dreams that depended on physical freedom, I questioned a lot. And it was in this context that I painted with my mouth. And, more than a gift, a ministry and countless possibilities emerged. Now I have autonomy,” Cunha said.

Not Marked for Life

Garden Pathways, a nonprofit, partnered with Adventist Health Bakersfield to provide laser tattoo-removal services free of charge, beginning in May 2021. The effort has assisted more than 200 individuals in the tattoo-removal process.

According to Adventist Health multisite director Shawn Pettis, a registered nurse, who has been trained and operates the Astanza laser at Garden Pathways, the laser heats the unwanted tattoo ink and breaks it down, thereby allowing the body’s natural immune system — the white blood cells — to dispose of it.

Many who seek help at Garden Pathways have a history of gang involvement, incarceration, drug use or other dysfunctions or problems, Avila said. But after completing the nonprofit’s mentoring programs, many clients gain a new perspective and realize their tattoos no longer reflect what is in their hearts.

“The process is pretty quick,” Juan Avila, Garden Pathways executive director, said. “But there are some restrictions. We ask that you don’t get another tattoo.”

Adventist Health and World Vision International have partnered to donate and distribute dozens of bicycles to middle school and high school students in northern Mexico. The project, Bicycles That Change Lives, aims to reduce school dropout rates and encourage physical activity. Students will use the bicycles for commuting to and from school and for general recreation.

In December 2021, Adventist Health facilitated the first delivery, which included 111 bicycles. An additional 250 bicycles were delivered in February 2022, with five more deliveries planned throughout the year.

To qualify for a bicycle, students must be enrolled in the current school year, have limited resources, have no other means of transportation, have a history of good school behavior, and meet a specified grade point average during the last school period.

Avocado consumption is associated with higher diet quality in adolescents, according to a recent study conducted by researchers at Loma Linda University and University of New Mexico.

Lead author of the paper, Gina S. Siapco, DrPH, associate professor at Loma Linda University School of Public Health, said avocado is a nutrient-dense food not common in many cuisines; however, when on the menu it usually accompanies healthy vegetables. This accounts for the study finding higher intake of plant-based foods and commonly deficient nutrients in avocado consumers.

“We were surprised the study seemed to indicate an environmental influence on the food choices of our adolescents,” said Siapco. “This means parents and schools can shape the food intake of adolescents that they will probably carry on into their adult years.”

(Photo: After a diving accident left him paralyzed, Marcelo Cunha began painting with his mouth. Cunha said opportunities for ministry and more have opened up because of his art and that now he is autonomous. Photo via South American Division’s news site.)