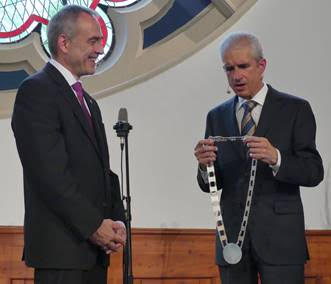 From APD, June 27, 2016:    Dr. Roland E. Fischer was installed on Sabbath (June 25) as the new rector of Friedensau Adventist University (FAU) by Pastor Mario Brito, president of the denomination’s Inter-European Division. Since 2009, Fischer has been a professor of practical theology at FAU. He has taught classes in homiletics, catechetics, liturgy and pastoral theology.

In a keynote speech, Heinz Schlumpberger, a member of the university board, stated that FAU is a small school with high standards of excellence. It was officially recognized only 26 years, but it has in this relatively short time developed 16 scientific institutes and nine Bachelor’s and Master’s programs that serve students from 30 nations. It currently has about 200 students. He pointed out that the founding, maintenance and promotion of educational institutions, especially universities, requires from the denomination a high financial commitment and cannot be understood in a simple cost-benefit analysis.

An investment in education, Schlumpberger said, can never be expressed by a material value, because education is of inestimable importance for each individual and for society as a whole. For the relatively small Adventist Church in Germany with about 35,000 members, it is a mammoth task to sustain this university. It is done out of conviction, “because they know the importance for the church and also for our society.”

A Christian university with roots in a Christian human image and Bible-based beliefs has a mission in the world and for all people, Schlumpberger continued. On the other hand it is a university and therefore must provide academic freedom in teaching and research, and it is precisely here there may be tensions.

For any denomination it is hard to allow scholars to analyze beliefs and permit corrections in long-held formulations. Church leaders want to leave no room for uncertainty among believers. Therefore, it is always easier to give those who teach and research only in a limited space which poses few risks. But questions and concerns must be taken seriously in order to enter into a constructive dialog and this is part of the professional ethics of university faculty, Schlumpberger emphasized.

This is a particular role of the rector as leader of a university, Schlumpberger continued. He must ensure a balance between the roots and the intellectual mission of the institution. He must moderate the dialog. The Rector should fight to ensure that limiting conditions do not damage the quality of academic development. Schlumpberger said he was convinced that Fischer will meet these requirements.

Brito presented Fischer with the symbolic chain of office and led in a prayer of consecration. He stressed that the rector, although with the responsibility for balancing the faith roots of the university and academic advancement wear, was alone in that responsibility. He has a highly dedicated team and as a Christian can trust in the help of God.

There were also remarks by Dr. Armin Willingmann from the Ministry of Economy, Science and Information Technology of the State of Saxony-Anhalt. Willingmann pointed out that Fischer is the fifth rector of FAU and therefore a member of the German Rectors’ Conference. He stated that although the university was recognized only 26 years ago, there is no other university in the country that has as much experience with foreign students as FAU. On this campus, he stated, multiculturalism is lived. This university is well positioned internationally. This is demonstrated by the fact that the previous rector was hired as dean of the H. M. S. Richards Divinity School at La Sierra University, the Adventist institution in Riverside, California.

Other guests who participated in the inauguration of the new Rector included Dr. Udo Sträter, rector of Martin Luther University; Dr. Dieter Orzessek, rector of Hochschule Anhalt; Dr. Volker Spangenberg, former rector and faculty member at the Elstal Theological College; Dr. Jean-Claude Verecchia from Newbold College in England; and Frank Holly, mayor of Möckern, the municipality where FAU is located. Friedensau became such a small town that in 2002 it was merged with Möckern, a small town which dates back to the year 948.

FAU has institutes in Old Testament and Biblical Archeology, Adventist History and Theology, Mental Health in Children and Adolescents, Church Music, Missiology, Religion, and Language Training,  Development and Humanitarian Aid, Protection of Ethnic and Religious Minorities, Families and Social Research, Addiction and Dependency Issues, Culture-related Communications and Values, and Music Therapy. The Historical Archives of the Seventh-day Adventist Church in Europe is also located on the FAU campus.

The featured photo with this story shows Pastor Mario Brito presenting the symbol of the office of university rector to Dr. Roland E. Fischer. APD is the Adventist news service in Europe.