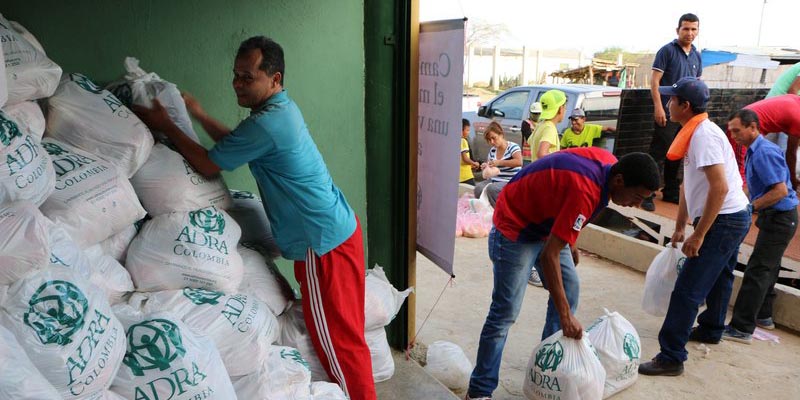 From Shirley Rueda/Inter-American Division Staff, June 27, 2016    The Adventist Development and Relief Agency (ADRA) in Colombia recently delivered 52 tons of humanitarian aid in La Guajira–one of the most remote regions in the northeastern part of Colombia. La Guajira is an arid state stricken by a severe drought that has claimed the lives of hundreds of children and livestock during the last five years.

“The crippling drought added to the closure of the border between Venezuela and Colombia and has greatly influenced the tragedy that this area has been suffering for lack of food and water, so we worked to extend assistance to families in need there,” said Gabriel Villarreal, ADRA Colombia director.

Reports came in that some 29 children have died of malnutrition during the first five months of the year which drove ADRA and its group of volunteers to revisit the area with aid, explained Villarreal. In September of 2014, ADRA Colombia made its first visit to aid hundreds of families in Guajira.

“This devastating drought in Guajira has moved us into action” said Villarreal. “Most of Guajira has not received rain for several years which has affected so many communities. It really concerns us. Just to think that many of the young children in Guajira have never seen rain is astonishing.”

Health ministry and social services officers from the mayor’s office in Uribia joined the efforts and thanked ADRA and its volunteers for the community impact in the region.

“We are very grateful for the health impact that ADRA has brought,” said Nayla Sierra from Uribia’s health ministry office. “The municipal district of Uribia is thankful for the humanitarian work you have been providing in the different places where it’s difficult to enter.”

Jaineth Daza of Uribia’s social services said ADRA has impressed them the most for such great work in the medical, humanitarian and food distribution in Uribia. “Truly, ADRA has been a great blessing today and we look forward to projects to benefit this community,” said Daza.

The project alone has been a historic one for the church and ADRA, said Villarreal, because it involved all 17 church territories across the country. Each conference and mission territory collected funds and non-perishable items to benefit those in need in Guajira. Villarreal said the project took several initial meetings with local authorities in Guajira to identify the needs of the communities and follow-up meetings with church leaders and volunteers to coordinate, transport and finally deliver the goods.

“The initial goal was to provide assistance to 2,400 families in Guajira, which represents some 12,000 persons, but some 2,600 families benefitted with 13,020 people lives touched with the project,” said Villarreal.

Many left their homes before dawn to get in line to receive medical attention and goods from ADRA, organizers said.

Lucia Fuentes, who is from a family of 15, was among 773 grateful families who received aid from ADRA’s distribution on day one in the Jujurá community. “This means so much to us, thank you for helping us,” said Fuentes. She and her family were also able to get free medical screenings and haircuts. Children participated in the recreational games and activities volunteers put on.

Without volunteers the project could not be possible, said Villarreal.

When Jenny Bonilla, a psychologist in Bogotá, saw a flyer inviting volunteers to be part of ADRA’s project in Guajira in her daughter’s school, she wanted to be part of it but wasn’t sure if non-Adventists could join the group of volunteers. She went to the ADRA Bogota office, applied, and in matter of days bought her ticket to be part of ADRA’s intervention in Guajira. She got sick and spent four days in urgent care but said God healed her. “He [God] wanted me to be here to serve and learn how so many of us are blessed,” said Bonilla.

Angelica de Jesus traveled from Hawai, where she is stationed with the U.S. Army, to be part of the project in Guajira. “I had been looking for a while for opportunities to serve and when I found out from a friend back home in Colombia about this ADRA project I did everything I could to come,” said de Jesús. “The greatest gift is to see the smiles on the faces of these people who we are helping. It’s really the best payment that we could receive for what we are doing here,” she added.

Smiling is not that common in Puerto Nuevo, expressed Josefina Palmar Pushaina, a Wayuu indian woman who is nine months pregnant with twins. She was accompanied by her three children, husband, and mother. “There’s no happiness here,” said Pushaina. “What we have here is need of help. We are thankful to ADRA Colombia for the help but we need more – we need water, food, and work,” explained Pushaina.

She said not a drop of rain has fallen on the land in five years. “The land is not good for planting and there’s no work anywhere.”

Pushaina dreams for her children to have a better future.

ADRA does not see this just as a second-time humanitarian effort, said Villarreal.

“We are happy to provide this aid in time of emergency, but we also want these communities to return to their normal lives when there was not a drought,” said Villarreal, “to help improve their lives as well,” he added. The plan is to have Guajira as a starting point from among many development projects, added Villarreal.