New Book Reveals the Full Story of the G.Y.C. Youth Movement Among Adventists

By AT News Team, March 15, 2015:   A new book by a young journalist tells the behind-the-scenes story of GYC, the organization now called Generation of Youth for Christ which began as the General Youth Conference. The annual gatherings of Adventist young adults sponsored by GYC have been both influential and controversial. The book includes these issues, but focuses primarily on the spiritual journeys of a group of Adventist university students.

It is entitled Something’s Happening: The Behind the Scenes Story of GYC. Both paperback and eBook versions can be obtained from Amazon on line. And if it is not easy for you to order the book on the Web, you can get a copy through the Adventist Today office at (503) 826-8600.

The author is Yolanda Suzanne Ocsai who graduated with a journalism degree from Southern Adventist University last year. She was born and raised in an Adventist family near Chattanooga, Tennessee. Her narrative is based on interviews and personal experience, and one reviewer has said the story is “intriguing and insightful like watching a documentary [and] Ms. Ocsai was able to portray characters and situations quite seamlessly.” 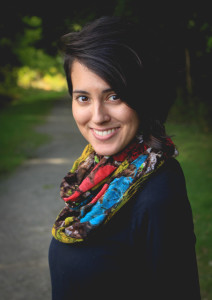 The Adventist Today Foundation agreed to publish the book after an official denominational publisher lost interest when the GYC leadership withdrew its support despite the fact that they originally cooperated with the author. “The topic is of interest to many Adventists,” said Monte Sahlin, executive director of the foundation. “More than that, we want to give voice to Adventist young adults. We believe in this author and we are seeking other young adults with manuscripts to publish.”

GYC is controversial, in part, because of the key role that Dr. Samuel Pipim played in its creation. He has spoken out against the ordination of women as Adventist ministers and published books advocating “headship” theology as well as other very conservative positions. Then, in 2011 he was found to be involved in sexual misconduct with young women he met through his ministry and eventually resigned his clergy credentials and membership in the Seventh-day Adventist denomination.

At least one reviewer has clearly not read the book, stating “poor theology, don’t bother [because] the SDA church does not believe in Headship Theology but in the priesthood of all believers, male or female.” The book definitely does not advocate headship theology, although some individuals involved with GYC do.

The book is definitely not about the Pipim saga either. Adventist Today has reported the Pipim story since 2011 and there is a list of those stories in the book, but it focuses elsewhere. It focuses on how young Adventists who have grown up in the faith are attempting to make a spiritual life for themselves in a world that is becoming more complex and less familiar as they graduate from Adventist institutions and finish their educations in secular schools.

GYC is not the only option for Adventist young adults. The denomination’s youth department has similar events and ministries, but GYC has been supported in a unique way by the Adventist-laymen’s Services and Industries (ASI) organization. It has developed a close relationship with some Adventist administrators.

A number of Adventist young adults have had an experience like that shared by Lee Givhan among the reviews on the Amazon web page. “I recently had a personal experience of disillusionment with the Generation of Youth for Christ conference,” Givhan’s wrote. “Friends began telling me that there was a higher up committee that was really calling the shots, a group of individuals who were careful not to give a voice to anyone who had views at all different from theirs within Adventism. I wasn’t so sure how true these stories were but as evidence seemed to mount and I heard how speakers who expressed views that didn’t fall in line were not asked to return and the music ministry I’m a part of … was not granted a booth even after further dialogue showing we met all the supposed criteria. … When a friend of mine told me about the book, … I couldn’t wait to read it. It was exactly what I’d been wanting, a behind-the-scenes view with first-person accounts from those involved.”

The appendix includes documentation prepared by GYC for denominational officials. The entire story is carefully balanced with the GYC young adult leaders telling their own stories.

Spectrum, the journal of the Association of Adventist Forums, the leading organization of Adventist academics, has published a positive review of the book. Most of the other reviews are positive, although clearly some defenders of GYC are critical of it. And a couple of the reviews complain about typos in the early eBook version, which have been eliminated from the Version 3 that is currently available and were never present in the paperback version.

Something’s Happening: The Behind the Scenes Story of GYC by Yolanda Suzanne Ocsai (2015, Adventist Today Foundation) distributed by Amazon.com. Click for the print version or for the Kindle version.