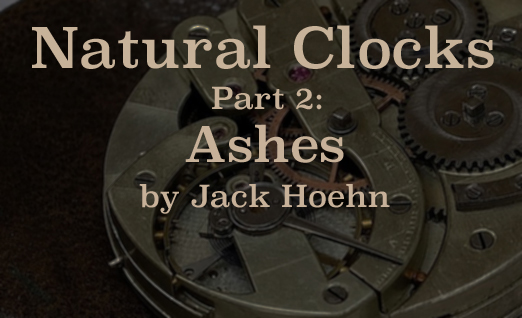 by Jack Hoehn, April 14, 2016:    (Second of a series of five articles on how we can know the age of the earth and when life was created. Part 1, about trees and pollen, can be found here.)

In the first article of this series we discussed how in telling the passage of time, it is useful when we can confirm the time by using several different clocks, in case one of our clocks is broken or giving erroneous information. Regarding the age of the earth and life on earth we discussed the natural and easily understood “clocks” of life found in annual tree rings and in annual snowfalls recorded in the Greenland ice fields. We see convincing and understandable records of up to 12,000 YBP (Years Before Present) in tree rings in living and cross-matched dead trees. And we concluded that there have been at least 60,000 annual snowfalls with dust from spring pollens every year, and likely 135,000 years of ice records in Greenland.

I was in Zambia at a mission hospital, not living in Walla Walla, Washington, in 1980, but those who were in this state cannot forget the May 18, 1980, explosion of Mount St. Helens in Western Washington’s Cascade range. Winds prevailing that day and for several days after carried ash from the eruption across Eastern Washington to Spokane and beyond.

You can find a layer of that ash especially in stream beds a few inches below the fresh sand and mud from recent rains. But if you look deeper along the sides of the stream you can find other ash layers separated from the 1980 St. Helens ash. These different ash layers have been identified by letters, so there are T, Z, X, W, D, B, P, and Y layers that occurred during human times, some of which can be identified by human records. If you find an ash layer W sub type e (“We” ash) you can be pretty sure that was laid down in 1482, for example. A layer of “Yn” ash dates to 1850 BC or 3865 YBP.

As you drive from Walla Walla to Portland along the Columbia River, in the road cuts and streambeds exposed by the road and river is a very distinct white ash layer that can be chemically identified as coming from Crater Lake in Oregon’s Mount Mazama ash, 6,845 YBP. Things above this layer are younger than that, things below this layer are older than that.
Historically, we have human records or legends of volcanic eruptions during the last 4,000 years of at least 10 major Cascade volcanos (2). And Mount St. Helens in Washington is estimated to have erupted every 100 to 150 years during observable times. But these eruptions recorded by observers or legends are only the top ash layers of many others. Mt. St. Helens has left at least 12 identifiable ash layers on and about the mountain and where the winds have carried this soil. In between the layers are thick deposits of non-volcanic soils from the erosion of rock and ash by many years of rain, storms, floods. So each layer of ash, and then the thickness of the soils formed between the layers, all across eastern Washington, is a kind of ash clock (3).

How Long to Lay Down the Palouse?

The soil in my backyard on the outskirts of Walla Walla is the beginning of the huge wheat-bearing area called the Palouse. When I wanted a well drilled, they went through 500 feet of fine volcanic soils with no stones, rocks, or gravel till they came to water-bearing rock and sand– 500 feet of “topsoil.” The average is about 250 feet thick across the region. So enough volcanic ash had to be carried by the western winds blowing in from the ocean, across Mt. St. Helens and Mt. Adams and Mt. Hood long enough to deposit the 250 feet of deep rich soil of eastern Washington. This is another clock, how long, and how many eruptions of volcanoes would it take to cover eastern Washington with the Palouse soils formed of windborne volcanic ash?

The massive 1980 St. Helens eruption made a 15-mile-high ash cloud the deposited soil carried by the wind that was three feet deep near the volcano and six inches across the Palouse as far away as Spokane. So if a volcano went off every year, and put down six more inches of soil every year, it would take 1,000 years to make the 500 feet of volcanic ash soil in my backyard. But we know this only happened once since 1857, so if it did happen as frequently as every 100 years, that means it would take at least 50,000 to 100,000 years to form the Palouse soils that cover 18,000 square miles (25%) of Washington State. This is a volcanic ash clock. And underneath the volcanic soils of the Palouse are fossil-bearing rocks, so life itself has to be older than this.

Farmer looks at fresh soil from Mt. St. Helens May 1980 (Photo courtesy of the Spokesman/Review).(4) 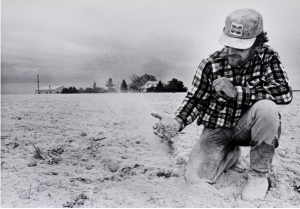 (This is the second in a series of 5 articles on how we can know the age of the earth and the creation of life on earth. Next: NATURAL CLOCKS, Part 3, DNA Clocks)

“Faith must go beyond Reason,
but never against Reason.”
Pastor Gregory A. Boyd