Naked but Not Ashamed: The Return to Spiritual Vulnerability 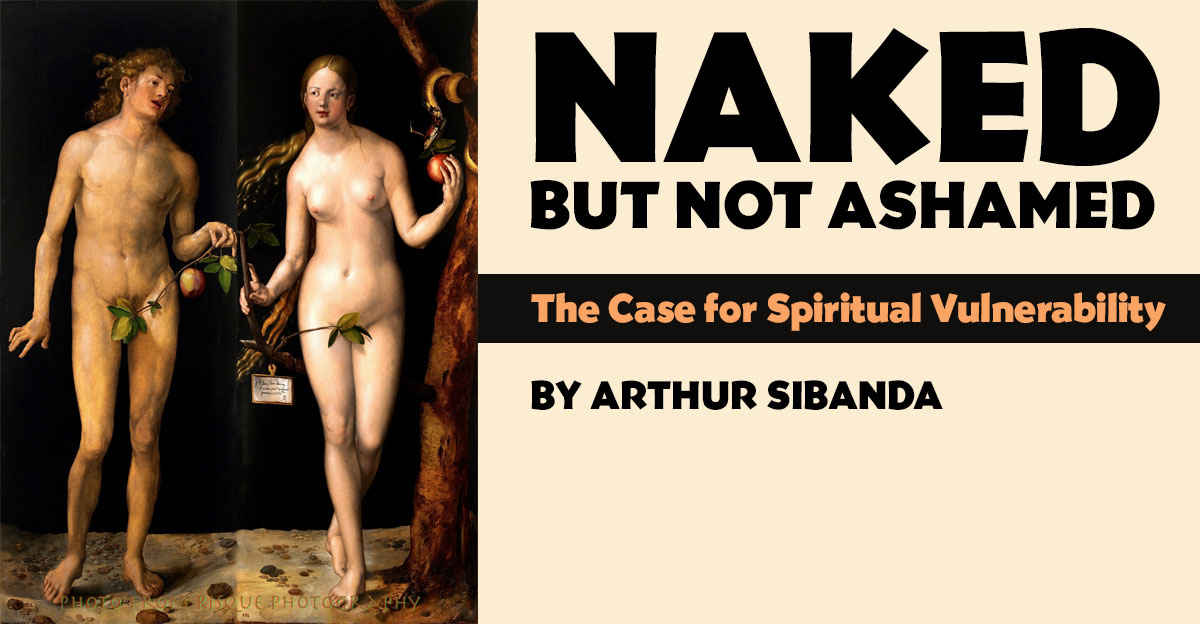 The Bible says that when God created Adam and Eve, there was no need for them to cover themselves with clothing.

Ellen White adds that they were enveloped with the same glorious light that enshrouded God Himself (see Psalm 104:2). (The theory isn’t original to her: Jewish mystics drew that conclusion from seeing that the Hebrew words for skin and light are homonyms.) This is the light that is thought to have left when the couple sinned, and thus resulted in the discovery of their shameful nakedness.

Yet the essential point remains: originally, “Adam and his wife were both naked, and they felt no shame” (Genesis 2:25).

In today’s world, most cultures use some form of clothing to cover the body. The portions of the body that need total covering vary from culture to culture. Generally, reproductive organs are covered, even in the most primitive societies, though even there it varies to some extent.

The world isn’t the same today as it was in Eden. While nudity has been seen as a natural state to be celebrated in certain kinds of art, we also see that the growth of pornography tracks with an upsurge of sex crimes and human trafficking.

Let’s set those questions aside and go a bit deeper. Perhaps there is a significant symbolism in God creating the first humans without any need for any physical coverings.

“And the man and his wife were both naked and were not ashamed.” Genesis 2:25 ESV

This verse is occasionally read during weddings as the officiant tries to raise the curiosity of the young to look forward to the sexual pleasures of marriage—an incentive that has somewhat lost its impetus in our postmodern age.

I believe that the state of nakedness here depicted in Genesis had a spiritual meaning that goes deeper than merely permission to have sex.

The sin-free environment of the Garden of Eden (the meaning of the Hebrew word has to do with pleasure) was the perfect embodiment of the ideal state of existence God had initially designed for humanity, an environment free from pain and suffering, a “little heaven,” which was a central stage watched by the rest of the universe to get glimpses of the character of God (1 Corinthians 4:9).

This is why the human race was created with the divine duty to bear the image of God:

God said, “Let us make human beings in our image who are like us. They will have authority over the fish of the sea and the birds of the air, over the livestock, and over the whole earth and every creature that moves on it.” Genesis 1:26 FBV

God does not wish to hide Himself. Not only is God seen in how He modeled us, but we get a sense of God’s transparency in the first words of the book of Revelation,

This is the Revelation of Jesus Christ, which God gave him to show his servants what will happen soon. He sent his angel to reveal it to his servant John. Revelation 1:1 FBV

The Greek word for our translated English word “revelation” is apokalupsis, which has nothing to do with doomsday movie themes. It means laying bare the whole truth and making a full disclosure. In other words, the book of Revelation is the “making naked or laying bare” the full disclosure of the character of God. God has always wanted to be known.

Could it be that in the creation of our human order God wished to demonstrate the truth about His level of transparency and honesty amidst the accusations from His arch enemy? This is what the lack of clothes could have symbolised.

It is also interesting to note that the word meaning sexual intimacy in the Bible was the Hebrew word yada, which means “to know by experience.” Sexual intimacy was therefore the highest level of self-disclosure one could experience and, given that it was the deepest level of “revelation,” one would only do it with one with whom he or she had entered into a covenantal relationship. God uses this imagery to describe God’s relationship to the nation of Israel, to whom God related as a husband (see Jeremiah 31:31-32). God has always wanted to be intimately known.

Even in the Old Testament God sometimes revealed Godself to the people (Hebrews 1:1-3). But the incarnation of Jesus—God in human form—was the epitome of God’s attempt to make Godself fully known. When we see Jesus weeping at Lazarus’ funeral (John 11:35), we realize that God is not afraid to be vulnerable to us by displaying grief to humanity.

Sin disrupted this experience of vulnerability and transparency. Adam and Eve ran away from God’s presence and covered their nakedness with fig leaves. They no longer wanted to be “known” by God, so they hid (see Genesis 3:7-8). Shame spread through the human genome, and up to today we have continued to cover our personalities with layers of pretence and hypocrisy to avoid being fully known. We are afraid of how others would react if they got to see the full disclosure of who we are.

While I fully appreciate the benefits of wearing disease-protective face masks, I have sometimes thought them a good metaphor of the masks we wear to protect ourselves from the perceived threat of being truly known by others. The heaven-like environment of transparency, honesty, and accountability is not being enacted in our midst.

Whenever humans have been exposed to the environment of heaven they have had an ego-shattering experience. When Isaiah saw God’s throne, he said:

The prophet experienced sudden exposure. In an environment of God’s radical transparency, he himself felt naked and overwhelmed. Fortunately, the defects of character he saw in himself were remedied immediately through the intervention of the holy ones (verses 6-7).

The act of confession shows that God desires us to lay ourselves bare to Him so that He can heal us. What if we could recreate this heaven-like state in our church communities? What if church became a safe place to strip naked, down to your true self, so that healing can take place?

I lead a sexual-addiction recovery ministry. I am often surprised by the fear of those who seek help from us, people terrified to seek help from their local churches. They say they cannot think of anyone in their congregation to whom they can open up without risk of featuring in the next sermon illustration. So they suffer privately and silently. They fully participate in church activities, but they are psychologically masked to cover up their deficiencies. Because they cannot be honest about their struggles, they are never known and hence do not find resolution.

This is not the plan that God originally intended for us. Just like in the Garden of Eden, where wearing clothes wasn’t necessary, God wants the church community to replicate the heavenly atmosphere in which every person seeks to be fully known. Our churches cannot be safe places of healing if our acceptance would be at stake when we share our struggles. Something about our church environments has to change for us to achieve this goal. As James says,

Admit the wrongs you’ve done to each other, and pray for one another so you’ll be healed. Earnest prayer from those who live right is very effective. James 5:16 FBV

Before you go…
Your financial support allows us to keep growing the best thing about Adventist Today: our international family of readers, writers and other contributors.
Since the start of the pandemic we have expanded from being an independent news and commentary publisher to actively engaging and growing our AT community via features such as our weekly Sabbath Seminar gathering and AT1, our weekly on-demand vespers program.
In a time of uncertainty when much of the world still suffers from indoor isolation, being part of the AT community means more than ever.
Your support has allowed the AT family to grow in diversity as more and more writers, presenters and musicians joined our family from around the world. No lockdown can stop the growth we’ve experienced together.
We couldn’t have grown like this without your support.
Thank you for giving generously to build the future of AT. Donate to Adventist Today by clicking here: atoday.org/donate

Arthur Sibanda is a mental health nurse in Victoria Falls, Zimbabwe. He and his wife, Mercy, have one daughter, Nobukhosi Tashanta. He enjoys writing, composing songs, and singing, and is also involved in a ministry helping people overcome sexual brokenness.