Monday morning was devoted to the financial report. You would be better served by someone who can explain this in ways that would satisfy the number-heads among you. I am lucky if I can basically capture a big picture.

First, these are the sources of the tithe. Please note that Pacific Union Conference used to be the tithe powerhouse. Southern Union has surpassed it. 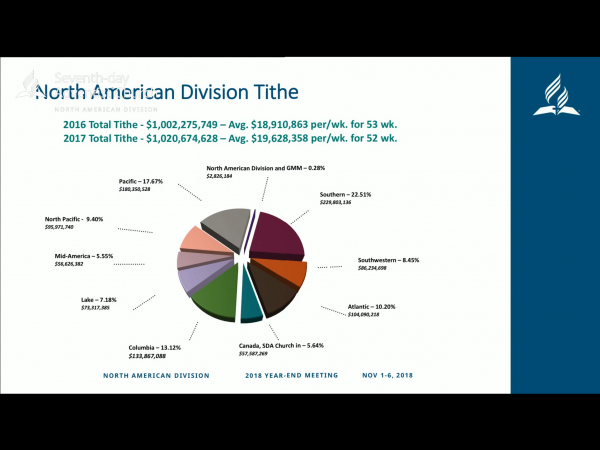 Here’s the second tithe slide that struck me—and this one could be important very soon. Notice the proportion of money shared with the General Conference (GC) from the NAD in comparison to how much comes from all the rest of the world! Yeah, it’s what it looks like. 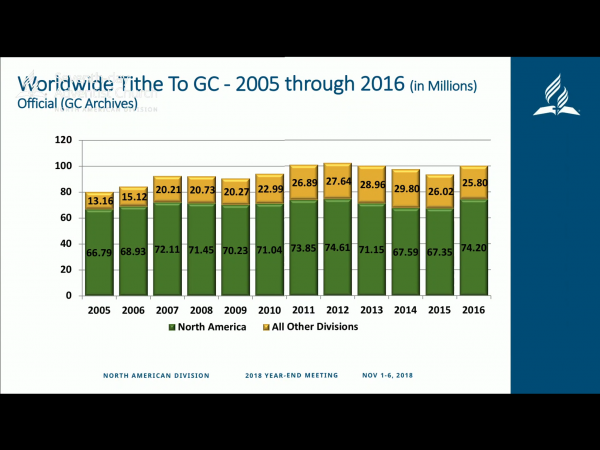 Here’s the third tithe slide: the amount we’re sending to the GC is going down, and (as the afternoon proved) there are some who would like it to go down even faster. 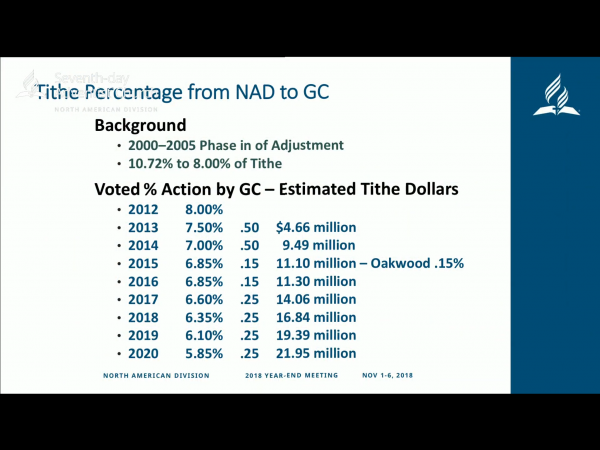 This slide isn’t about tithe, but about the organizations that are raising money from church members in the NAD. Someone asked, “How much money do they get?” Another asked, “Are these ministries audited?” The answer to the first question is, “We don’t know,” and to the second question; “Some are. Some we don’t know about.” 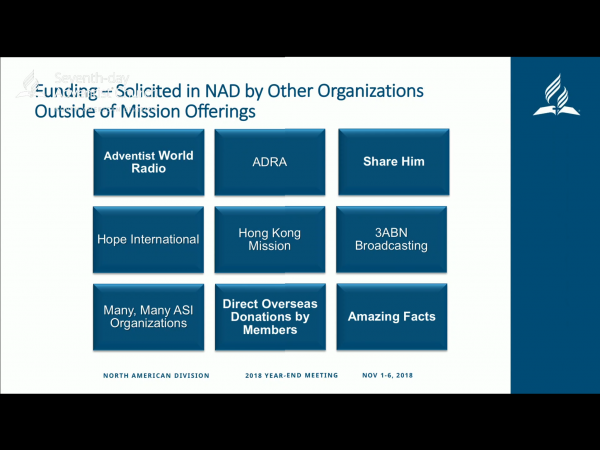 This slide tells you generally how the money the NAD receives is divided between itself and the GC. The one right after that tells you how the NAD spends the money it receives. 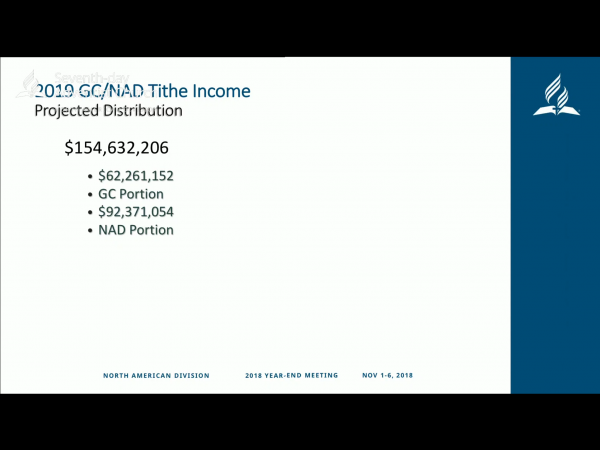 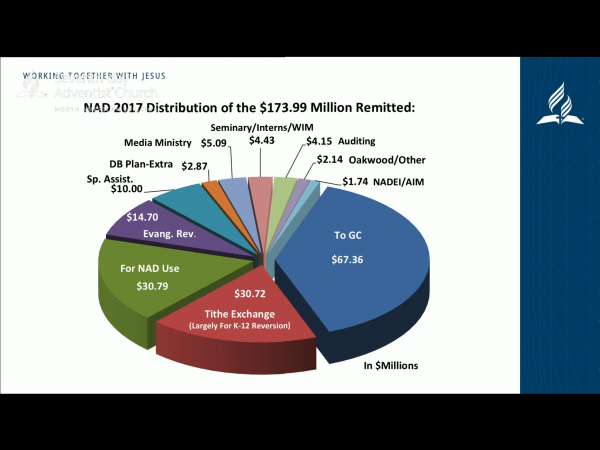 Finally, there is a misperception that the church hierarchy gets most of the money we give. This shows you how much is kept in the conferences, and how much is remitted to the NAD, with a portion of that ultimately going to the GC. However, at least some of the portion that is sent to the NAD is actually spent on needs in the local conferences. The NAD, for example, provides for a portion of retirement benefits, school administration and curriculum  costs, and on and on. 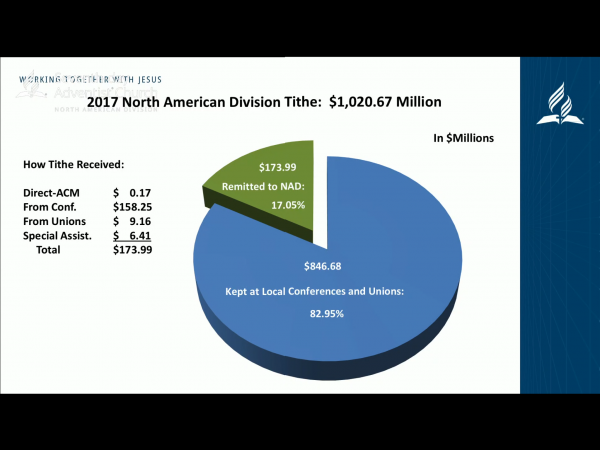 After an upbeat and healthy financial report, I was interested in a comment from Throstur Thordarson, a pastor from South Bend, Indiana. We like seeing more money staying in the NAD, he said. But why does it seem it is being spent by the NAD office? We are top-heavy in church administration. Why can’t we restructure for efficiency, cut down the expenses 25% to 35% and redirect it to the front line?

Dan Jackson responded graciously: It’s something we have been looking at, he said, but we’ve not yet been able to implement everything we’ve studied. For example, he admitted, we don’t really need 59 local conferences anymore.

Doug Bing added his voice to the notion of working where the iron is hot. The Spanish language work is the fastest growing, so can we seek ways to increase money going where it’s successful? (Not a new idea: C. Peter Wagner talked about targeting receptive people groups 40 years ago.)

Here’s what you need to understand about retirement. Until I was half through my career, I thought I’d be getting a pension or “defined benefit” retirement plan. In 1999, a “defined contribution” plan started in which I and my employing organization both contribute to an individual retirement account (IRA). Between the two, I’ll have a lot more money in retirement from the defined contribution plan—because I saved and invested aggressively—than from the defined benefit pension.

Trouble is, there are a lot of people still alive (like me) who were for at least 10 years under the defined benefit plan. And those people—basically anyone who worked for the church for 10 years before 1999—are going to be living for awhile. Of course, that amount goes down every year as retirees die, but the demographics push the end of that program out for decades more. 2025 will be the peak year for retirees receiving money from that old plan. There are 21,000 employees in the division, and more in retirement. 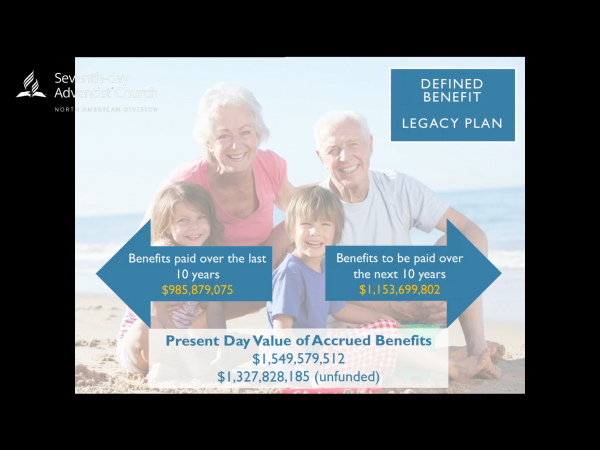 And that’s a lot of money—a total of 1.5 billion dollars of liability stretched out over the next half century. And that liability falls on fewer and fewer institutions, and maybe, eventually a shrinking church membership in the NAD.

Reports from Christian Record and the media ministries are worth watching on the video. (Diane Thurber, who now runs Christian Record, admitted they’re looking for a new name. Why? Many don’t know what a record is anymore!)

I need to tell you that, embarrassingly, I didn’t finish the report on the important tithe parity discussion last night. Why? Because yesterday, November 5, was Carmen and my 40th wedding anniversary, and I figured spending the whole day in a church meeting was already enough neglect of my wife on a special day. So instead of writing for you, I took her out to eat. Please forgive me. I’ve got plenty to say about it! (It’s posted now—go here to read it.)

But for your information, the bottom line is pretty simple. The NAD gives about 6% of our tithe to the GC, and gets nothing but abuse from the GC president. The rest of the world divisions give 2% of their tithe. The folks at this meeting voted to ask the NAD leaders to bring that into parity (which, if you think about that word, does not mean everyone paying 2%) within two or three years. After many comments, and a slightly insulting and condescending speech by Elder Juan Prestol, the GC treasurer, it passed. I’ve got mixed feelings. I’ll tell you more about that later.

Loren Seibold is a pastor, and executive editor of Adventist Today.