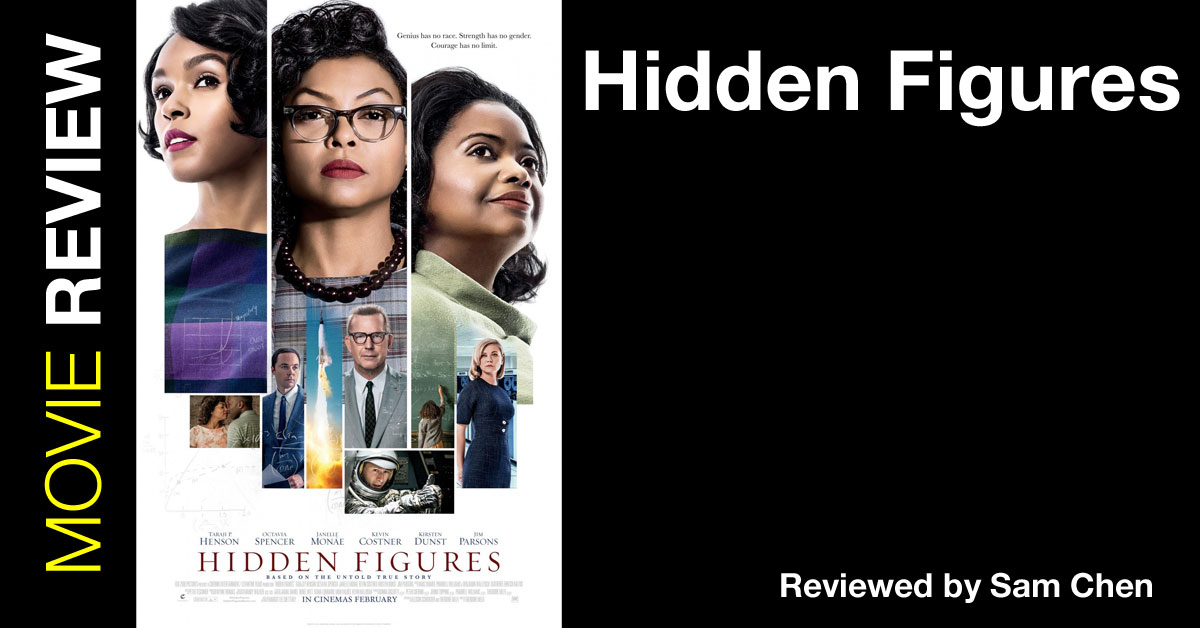 In the wake of Charlottesville, and given a POTUS who refuses to denounce racism without equivocation, a review of a germane film seems in order. “Hidden Figures” (2016) is based on a nonfiction work by Margot Shetterly (I’ve not read the book), examines the lives of three African-American women gifted in mathematics who had an impact on the early 1960s NASA space program.

It is a story worth knowing.

Based in VA, a place segregated at the time, the women have to confront animus based not only their skin color but on their gender.  NASA (and, indeed, most of government, it seems) is run by men.  White men with skinny ties. Can the women overcome?  Not only can they, they do.  But it is not easy.  Ingrained attitudes and habits die hard.  Victories are often few and far between.

3 scenes in particular adhere to memory:

Paul Stafford, a white colleague (yes, with narrow necktie), whose initial hostility toward Katherine persisted throughout much of the film, sets a cup of coffee down on the desk for her. That is, in addition to being a small act of kindness, symbolic: when she first arrived at NASA, when she went to pour herself coffee, the pitcher was (at the hands of others) empty.

These women weren’t ordained to become mathematicians.  Though religious, their Bibles (like ours) didn’t speak to the issue of ordination. They had to work, and hard.  The complex equations they solved (yes, this was rocket science) didn’t care whether they were solved by men or women.  Or what color skin covered the hearts and minds of those mathematicians.  As it so happened, the mathematician astronaut John Glenn most trusted was a black woman.

This is ultimately an informative, inspirational work.  Some reviews indicate it departs slightly from the derivative book, but that is something I am willing to take in stride, because I was enlightened in the viewing.  Many films take poetic license.  This one didn’t seem to take much. The story was at once both credible and incredible, a reminder that, as William Faulkner remarked during an acceptance speech for the Nobel Prize (for Literature, 1949):  “Man (read woman as well) will not only endure, he will prevail.”

Unfortunately, Jim Crow is yet alive and well. Decades of Martin Luther King, Rosa Parks, Freedom Marches, and stories such as this have failed to eradicate an inimical philosophy that proclaims (recalling George Orwell in “Animal Farm”):  “All men are created equal, but some are more equal than others. I’m one of the some. You’re one of the others.”

A story is told of a bus driver in the South who grew tired of bickering passengers.  Both blacks and whites wanted to sit near the front.  Finally, the driver stopped the bus and opened its doors. “Y’all git out now,” he said. When the bus was emptied of passengers, who stood by the bus at the dusty roadside, the driver said, “From heah on in they ain’t no black or white.  Everybody be green. Now git back on – light green in front, dark green in back.”

Unlike Jim Crow, the Almighty says, “You may not be OK now, but, if you let Me, I’ll help you.  I don’t care your skin color, your gender.  You and all My children are equal.  You can sit anywhere on the bus.”

“Hidden Figures” is a double entendre.  Figures of one entendre solved figures of another.

Such characters as the three protagonists in this film deserve recognition.  They should emerge from the shadows of obscurity into the sunlight of appreciation. They may help us become better people, a 1.1 version of our usual 1.0.  2.0 awaits a future time, when hidden celestial figures reveal themselves at the Parousia (triple entendre, anyone?).

I’m convinced the Almighty is color blind and gender blind.  If He is, might not we aspire to that?

(You can purchase “Hidden Figures” from Amazon and Adventist Today receives an affiliate payment. Purchase the streaming movie, DVD or Blu-Ray or any of the print/audio versions by clicking on these links. Thanks for supporting Adventist Today!)