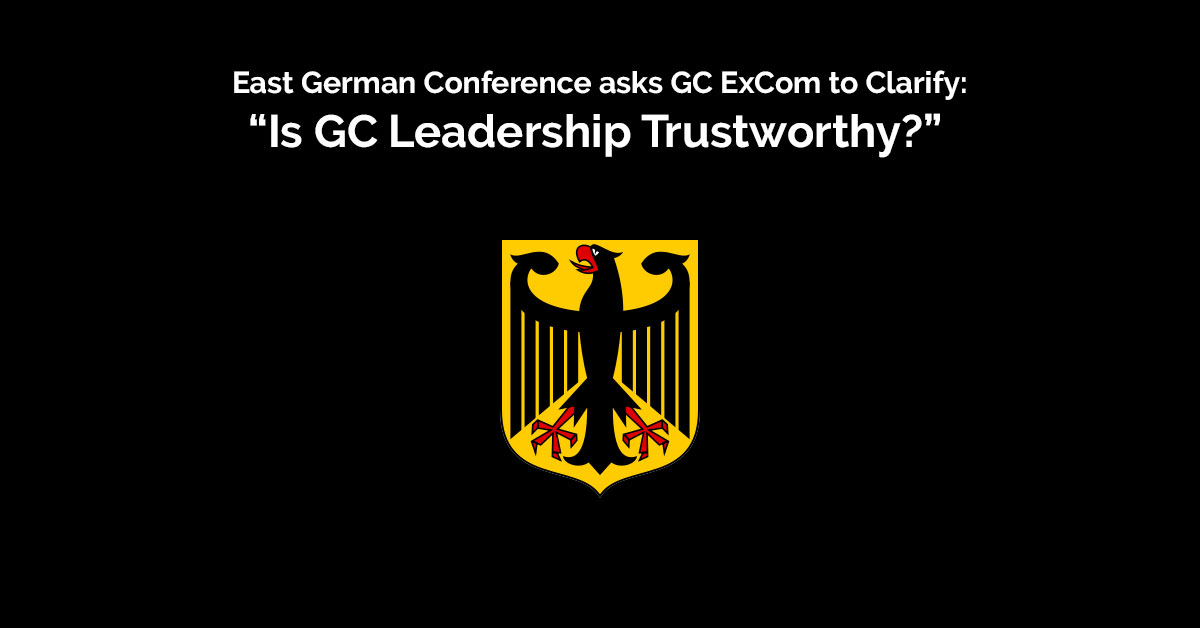 Elder Reinhard Rupp, retired president of the North German Union and an elder statesman of the church in Germany, has drafted a personal response to the expanded “unity” procedure proposed by the General Conference leaders.

“Sometimes,” writes Elder Rupp “it is no longer the original problem which causes troubles, but the way the crisis is managed.” He draws on the story of the disciples facing the Sanhedrin in Acts 4 and 5 as a model for dealing with unions which have been recalcitrant with regard to the 2015 San Antonio vote on women’s ordination.

He explains how in Acts, the disagreement was resolved by Gamaliel, who emphasized God’s influence on the consciences of the apostles.

As loyal and God fearing citizens the apostles never questioned the authority of the Sanhedrin. They never would have acted against its decisions, except in a conflict of loyalties. So even when confronted with the threat of death (Acts 4:19,20,33; 5:29) the apostles would follow their Lord – and their conscience. After San Antonio, 2015, a number of SDA Unions in different divisions felt unable to react positively to the vote of San Antonio. They too normally never would question the authority of the General Conference. If these men refuse obedience to our worldwide church, then it is because of a serious conflict of loyalties.

You can read Elder Rupp’s entire statement here in German, and here in English.

Berlin-Mitteldeutsche Vereinigung Conference (composed of much of what used to be East Germany) has also issued a statement in regard to the “unity” discussions. This statement is unique in that it appears to be the first to bring up the competence of the General Conference leadership. It can be read here in German, and here in English.

Believing in Jesus Christ, we are convinced that trust and voluntariness are fundamental values ​​of the Christian community. In loyalty and solidarity, church members are committed to their local church, give their tithing and carry the free church with their gifts. We object to obedience through restriction and pressure. This violates freedom of expression and conscience, creates a climate of fear, and destroys a church based on trust and voluntarism. Jesus says, “You know that the rulers hold down their people and the mighty do them violence. That is not how it should be among you; but whoever wants to be great among you, let him be your servant; and whoever will be first among you, let him be your servant, just as the Son of man did not come that he may be served, but that he may serve and give his life as a ransom for many “(Mt 20:25-28). Believing in Jesus Christ, we are convinced that our Free Church is built on the authority of the church base. The role of church leadership is to serve the community by recognizing and supporting the diversity of its manifestations. Church leadership is accountable to the community.

As a consequence, we call the members of the General Conference Executive Committee,

The third point concludes with this provocative request of the GC ExCom: “Furthermore it has to be clarified whether the current Church leadership continues to have a vote of confidence.”