Morality: Objective, Absolute… or Something Else? 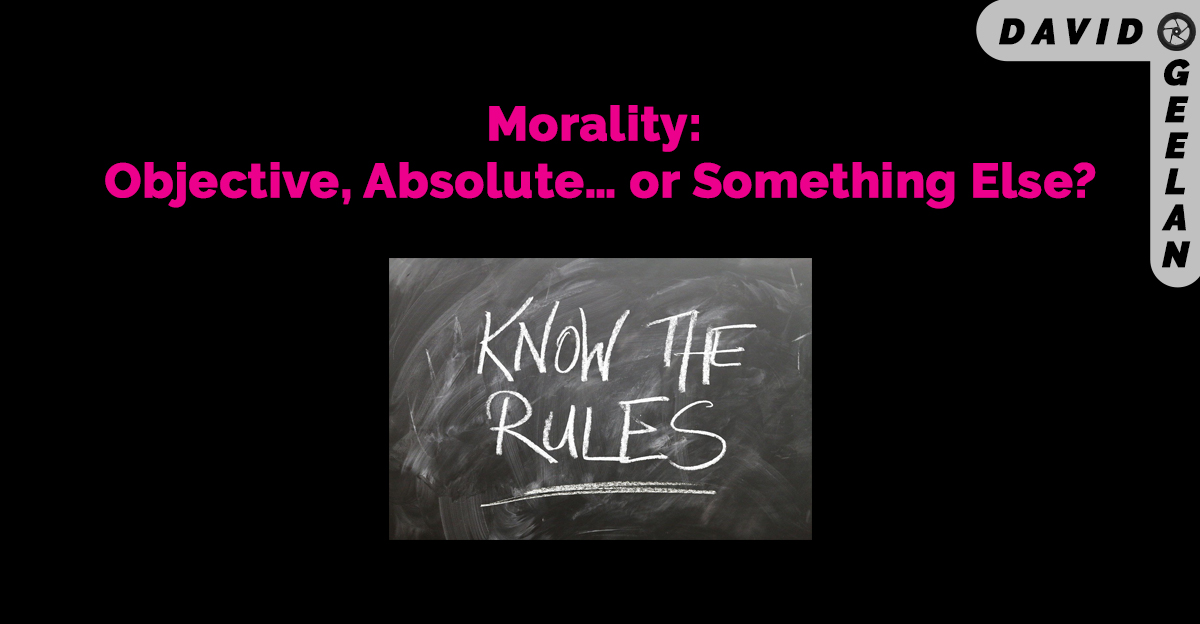 Is morality dependent on human beings, or independent? Many of the comments on my most recent piece for Adventist Today, entitled ‘Can Atheists Be Moral People?’ suggested morality must be objective, or else everything is utterly subjective, and each person’s moral framework is as good as anyone else’s.

Most of these comments suggested that this means an absolute, eternal, objective – and therefore divine – originator and guarantor of morality is needed to avoid this absolute subjectivity.

There are several terms that are used in these discussions, and it’s probably helpful to disentangle them a little bit. (I think it’s worth noting here that there is a lot of formal technical language in axiology – the philosophy of ethics and morality – that I’ve chosen not to use here in order to keep the discussion as accessible as possible.)

There is a distinction between absolute and relative morality, for example. Is morality context-independent? Are some things moral and others immoral, no matter where or when they occur? In discussions about this question, often the appeal is to the most extreme and viscerally disgusting example that can be invoked. I don’t want to go down that path by even providing an example, but essentially thinking of the most evil and reprehensible action imaginable, and using that as the basis of the argument (with the view that since this is always wrong, everything that is wrong is always wrong), is the approach.

A genuine moral absolutism, however, does not apply only to these extreme examples, but to all of morality. To take a more complex – and in some parts of the world still ‘live’ for Christians – moral issue: is polygamy always morally wrong? Are the only possible moral positions for human beings singleness or monogamous marriage between two and only two partners?

Often the approach within the church has been that monogamy is God’s ideal but that other arrangements have been allowed at particular places and times for social, historical, humanitarian or other reasons. But this is a moral relativist rather than a moral absolutist position, since it takes into account local factors, rather than holding that the same morality applies everywhere and everywhen.

Moral relativism can be thought of as a continuum, rather than a binary distribution. The alternatives are not, on the one hand, moral absolutism and, on the other, absolute moral relativism (or moral nihilism) where any moral perspective, even Hitler’s, is considered equally valid. Rather, there is a continuum of possible views on which elements of morality are influenced by contextual factors, and in what ways.

Which takes us back to my previous piece, which was about moral reasoning and how people – both believers and non-believers – seek to make sense and make the best possible moral decisions in complex contexts. We could argue that moral absolutism makes moral reasoning irrelevant, since the rules are clearly laid out and it’s simply a matter of applying them… but I don’t think that’s the case, because even if lying is always wrong and killing is also always wrong, some reasoning is required to decide whether lying to someone who is seeking to kill someone else is morally right.

There are people who believe in an absolute moral purity, who would choose to ‘tell the truth though the heavens fall’, even if it meant the death of an innocent, but this is not an especially common approach.

The key point I want to make is that there is a continuum of possible moral relativist positions, from moral absolutism to moral nihilism. It is not honest for someone who believes in moral absolutism to argue as though anyone with any position other than theirs is a moral nihilist. Or, more charitably, perhaps such people are arguing sincerely based on their own understanding, but I would argue that their understanding is flawed.

The other pair of terms often invoked in these discussions is ‘objective’ and ‘subjective’. Essentially, in this context ‘objective’ means ‘person-independent’ – the same for all persons – while ‘subjective’ is ‘person-dependent’. It is parallel in many ways to ‘absolute’, but there are useful differences as well: absolutist/relativist relates to contextual factors around the moral decision-making, while objective/subjective relates to the person making the decision, and is about internal mental states more than about external conditions.

A similar issue exists: some understand these terms as a binary where one must choose to be absolutely in one camp or another, and where being in the ‘subjective’ camp means that any individual’s views are considered equal to any other’s and there is no way to decide which is more moral.

I would argue, similarly, that a continuum is a more powerful way of thinking about this issue than a binary, but also that it is slightly more complex, because human beings are (however we got that way) social beings rather than ruggedly individual ones. Given that we learn our moral views, largely using language but also observation of unvoiced actions, from our parents, teachers, peers and the people we grow up around, and then continue to hone those views with the people we interact with, as well as the people in the various media we consume, there is an additional dimension to consider: ‘intersubjectivity’.

In this context, intersubjectivity can be thought of as the ways in which our perceptions of others, including of their perception of us, influence our subjective thought processes. Whether we acknowledge it or not, we make our moral decisions and arguments within social contexts, drawing on the thoughts of others.

The ‘social contract’ elements of the Kohlberg framework discussed in my last article relate to intersubjectivity: the ways in which the views of others – and the actions those views engender – influence our own views and actions.

So we have a couple of sets of useful distinctions – absolute/relative and objective/intersubjective/subjective – which have, I hope, been clarified a bit.

It’s difficult to establish cause and effect in relation to other people’s thinking, so I will leave it to each of you individually, if you believe morality is absolute and/or objective, to decide which came first – that moral belief, or belief in God as a source and guarantor of morality. Whichever the direction of that relationship, certainly the correlation between belief in God and moral absolutism/belief in moral objectivity is very strong. (Note: I avoided the term ‘objectivism’ because Ayn Rand used it to describe her views, which muddies the water because her ideas are quite different from a belief in moral objectivity.)

This is not a necessary connection: it is possible to imagine a view that says moral absolutes are somehow inherent in the material of the universe, independently of human (or any other) observers. Moral absolutism and/or a belief in moral objectivity can be derived from an atheist-materialist perspective, although I would argue that it is quite difficult, and I personally don’t find such attempts convincing.

Most often, though, it is those who believe that morality has its origin in God who also believe that morality is absolute and objective. Even those who also recognise the necessity of moral reasoning, as in the examples where two moral imperatives are in competition, will argue that these are compromises caused by a fallen world, and that the ideal is context-independent, person-independent morality.

I feel like a little bit of a fraud, I have to admit: I may have promised to talk about whether morality really is absolute and objective. I don’t think I’ve done that, really at all. I’ve left it – as the old physics and math textbooks used to say – ‘an exercise for the reader’. That’s because I don’t think I’m really in any position to say anything definitive – anything beyond the personal views I’ve arrived at – on the matter.

What I hope, though, is that I’ve done the main thing I seek to do when I write for Adventist Today: helped us all to understand both our own and others’ ideas and positions better, so that our discussions can generate more light than heat.

Thank you for your support in our end-of-year fundraiser.
We need help to reach our goal, and we’d ask those of you who haven’t sent anything yet, to give us a gift before the month ends. You can do this in several ways.
You can donate one time by clicking this link
or
monthly by clicking this one
or call us toll-free at 800.236.3641