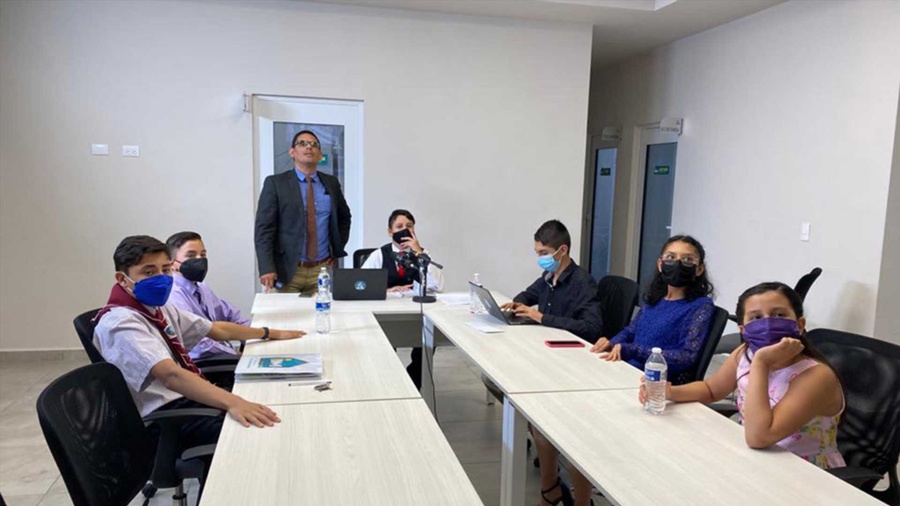 Seventh-day Adventist leaders in the north, central, and mountain range of Chihuahua in Mexico recently provided leadership skills to dozens of children from across the region with a special program called “The Conference of Tomorrow.” The program involves young church members between the ages of 10-15 leading at different levels of the church—including administrative, departmental, pastoral, and the local church—for one week.

This is the first year the initiative has drawn youngsters to experience firsthand how the church operates from the local level to the conference level, church leaders said. The program was held May 14–21.


“Our main objective is to promote church leadership development among children and adolescents and prepare them to be the future leaders of the church,” said Ivan Orozco, Youth Ministries director for the church in the Chihuahua Mexican Conference. Each position was filled at the local level, including the pastor, treasurer, and elders. Each department or ministry leader was elected, he said.

The young people dealt with numerous responsibilities and issues, said Alma Ubaldo, Children and Adolescent Ministries director for the Chihuahua Mexican Conference. Participating churches elected their pastors, church board, and participants to organize the church activities of the week. While being mentored, they visited families and met with district pastors, among other activities.

Valeria Orozco was elected to be the treasurer of the Chihuahua Centro Adventist Church. “I really liked how the church is well organized,” she said. “When the deacons collected the tithes and offerings, I had to verify the amounts of funds collected were correct and had to post them on an Excel sheet. I also had to make some payments.”

The children were also part of leadership training at the conference office; they shadowed leaders and took part in decisions and meetings. “Each child or adolescent performed their responsibilities in person, spending days in the office or at church and organizing activities,” said Orozco.

Because the State of Chihuahua is so large, two groups of “Conference of Tomorrow” were organized so children could have the opportunity to take part in the experience in Ciudad Juarez or Chihuahua City, where the conference office is located, explained Ubaldo. The group included the election of two sets of conference administrators and departmental teams, she said.

The first part of the conference level training began in Ciudad Juarez, where participants led the program during a church elder congress.

The second conference team of children and adolescents visited the office in Chihuahua City for orientation and work in the office. “We gave them the keys to the office, and each leader explained each role of their department, what their responsibilities were, made calls, took part in leading meetings, and then met together on Zoom to speak to the ‘pastors of tomorrow,’” said Ubaldo.

Several outreach activities were proposed by the young people; among them were plans to hold a large health brigade in Ciudad Juarez and an initiative to invite young people who are not from church to a special program celebrated on Students’ Day in the country.

In addition, the young group took care of incoming calls, held meetings with pastors and church leaders, and held a planning session on a proposed initiative coined the “Conference [or Church] of Tomorrow” that is to be studied by the North Mexican Union, voted, and later shared with the rest of the conferences in the territory.

In previous years, many of the local churches held similar leadership programs for children as part of an honor class requirement in Pathfinder clubs, but soon it was adopted as an initiative across the conference, said Ubaldo.

The Chihuahua Conference is the first field across the union that is holding this activity at various levels, said Arturo King, president of the North Mexican Union. “We encourage children and young people to serve in their churches. Without their creativity, enthusiasm, and strength, many churches will start to die. Each one must put their gifts and talents to the service of the Lord.”

Conference leaders said they plan to continue the initiative as an annual program throughout the territory.