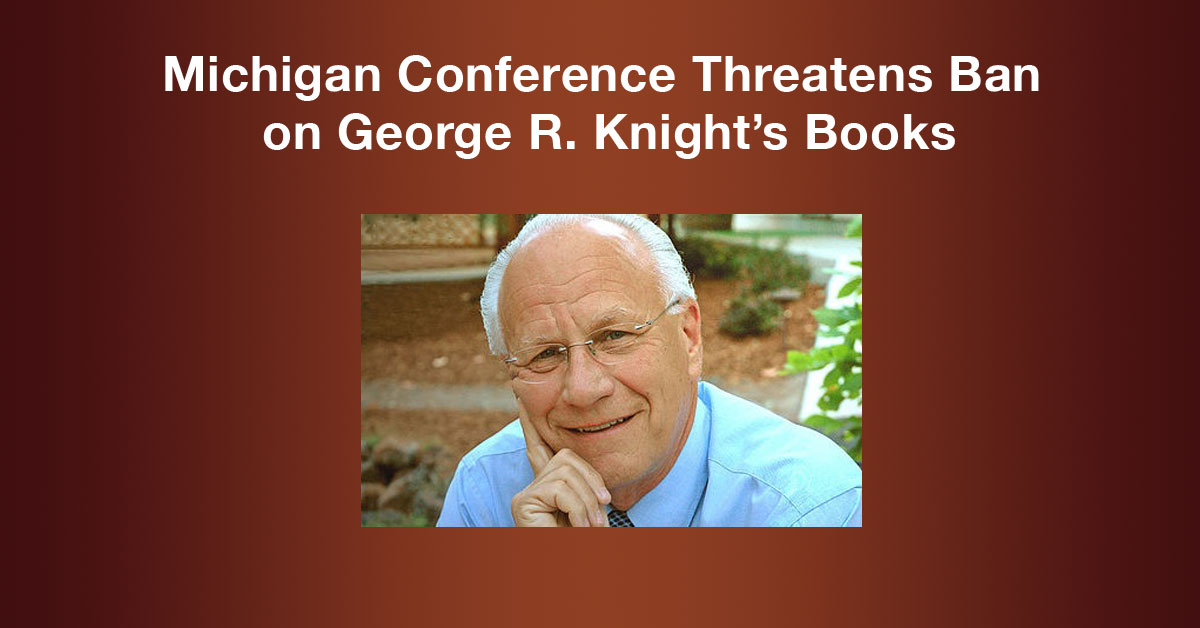 Updated Story Originally Published July 7, 2017:  After being banned from the shelves of Adventist Book Centers in the Michigan Conference, books by Adventist church historian Dr. George R. Knight have once again been approved for sale.

Jay Gallimore, president of the Michigan Conference of the Adventist Church, released a statement on the conference website explaining the decision.

Gallimore said that recent comments by Knight had raised “serious and troubling questions.”

He said, however, that after reviewing recent comments by Knight, “the decision was made to continue to make his books available at the ABC at this time.”

Gallimore claimed that the comments in question were not related to Knight’s position on women’s ordination (Knight is in support of ordaining women as ministers in the Adventist Church.).

Instead, he said that the conference was troubled by “questionable comparisons articulated that appear to undermine the leadership and integrity of the Seventh-day Adventist Church.”

The comparisons were made during Knight’s public address at the Unity Conference that took place in London last month.

The event had been organized by leaders from four world divisions (regions) of the church.

A majority of delegates at the time voted not to allow world divisions to make their own decision on whether or not to ordain women.

In his comments in London, Knight heavily critiqued the General Conference for what he characterized as an abuse of authority.

Reflecting on the Protestant Reformation, Knight likened attempts by the General Conference to force conformity on the issue of women’s ordination to the abuse of authority of the Catholic Church at the time of Martin Luther.

Knight stated that “Adventism has moved at times from being a church based on Scripture to one based on tradition and ecclesiastical pronouncements.”

He claimed that ordination was not a biblical topic and that from a biblical standpoint there is no difference between ordination and commissioning, the latter of which is used to recognize Adventist female pastors in ministry.

Addressing leadership overreach, Knight said “the General Conference leadership in 2017 is coming dangerously close to replicating the medieval church in its call for the serious discipline of large sectors of the church on the basis of a non-biblical issue.”

Knight said that due to “the suppression of data and the manipulation of events” he did not believe the 2015 ordination vote reflected God’s will.

He compared GC efforts to sanction large sectors of the church that did not agree with the outcome of the ordination vote to the use of force employed by Nazi Germany to eliminate diversity and opposition.

Gallimore had strong words of condemnation for Knight as he teased the possibility of a future ban on his books:

“The question should be raised as to whether we should carry authors who position themselves against the leadership of the General Conference, and equate themselves to Luther standing up to the Pope of the medieval Catholic Church. Is it appropriate to suggest a comparison between the Seventh-day Adventist Church and the persecuting medieval church? Or should unions be urged to stand against the world church in the way that people were urged to defy Nazi Germany in WWII?”

Gallimore added that given that ABC outlets were Adventist and not secular, it was to be expected that authors carried by the stores “be supportive of their church and its representative form of church government.”

According to a report from a customer that visited the Berrien Springs, Michigan ABC store this morning, a store staff member said that Knight’s books are only back on the shelf until the current stock sells.

After the current books are sold the branch will not be allowed to order any further books by the author, though individuals can order Knight’s books and pick them up when they come in. They will no longer be allowed on the shelves.

When Adventist Today contacted the store via telephone, staff would not comment on the sale of Knight’s books, pointing instead to Gallimore’s statement as the official line from the conference.