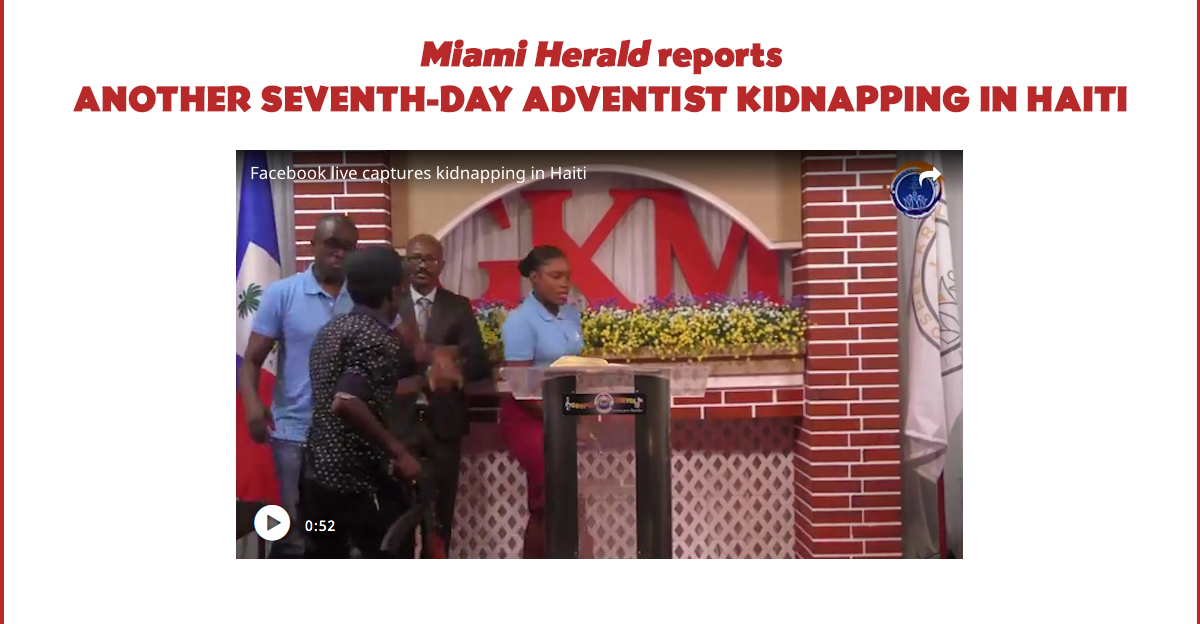 The Miami Herald reported today that members of the Seventh-day Adventist Gospel Kreyòl Ministry Church in Diquini, a suburb of Port-au-Prince, were performing live on Facebook and YouTube in a studio on Thursday night when they were abducted by heavily armed men. The abductees included two technicians, Steven Jérôme and Francisco Dorival, Pastor Audalus Estimé, and musician Welmyr Jean-Pierre. Two women in the studio escaped. According to the Herald,

The kidnapping unfolded two hours and 23 minutes into a worship service titled ‘15 Days of Thanksgiving and Praise.’ Minutes before, Estimé was preaching about the power of God, telling the audience that “Satan has his limits,” but “the power of God can reverse anything regardless of the situation.” … Jean-Pierre, standing to the right of the pastor, can be seen ducking, while [Pastor] Estimé was looking at his Bible and a young woman continued to sing. The woman tried to continue singing but then stopped. After crouching on the floor near the podium, all stood up as Estimé folded his arms in a sign of resistance. An unmasked heavily armed man wearing a dark shirt then appears on the screen motioning for them to come with him. The woman managed to get away when the man went back to grab Estimé. … It has shaken not just the Adventist community but Haitians in and outside of the country, who fear that the country’s proliferating armed gangs are becoming increasingly emboldened as insecurity spreads.

Kidnapping people as they sing in praise of God . . . in a church . . . just before Easter? They were live on Facebook when an armed man stormed in and kidnapped them in Haiti. For Haiti, it was a new low.…There are no words for the level of impunity and complete lack of accountability in Haiti under Moïse. I will not be quiet. Let’s stop talking nonsense about legitimate elections being possible under these circumstances. We must work for change, right now.

You can see the kidnapping unfold on video here.

Kidnappings in Haiti have increased 200% in the past year, and this is the second to hit the Haitian Adventist church, the first being when Elie Henry, president of the Inter-American Division was kidnapped on Christmas Eve with his daughter.

The studio is located not far from the mayor’s office in Carrefour. Said Elder Henry, “We are without words and torn by all kinds of emotions over what is happening. We have to hold onto faith and put more confidence in God.”