Holy Week, part 3: A Superhero for All Time 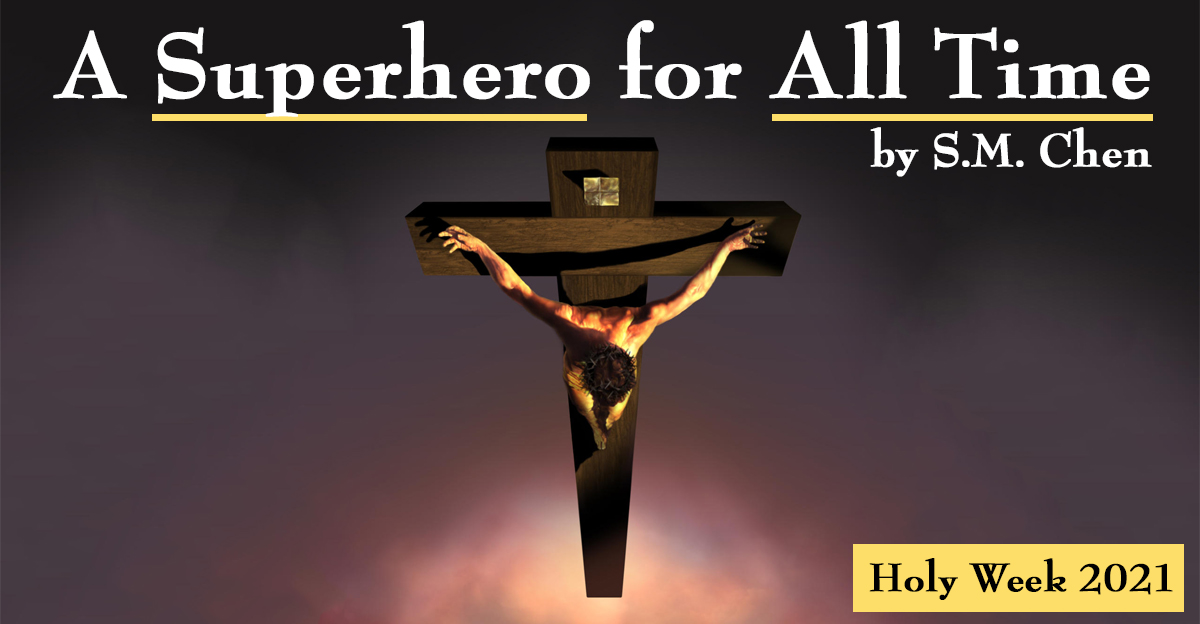 Most of the time when I was growing up, my father cut my hair.  I would sit in a high black and chrome vinyl chair in the kitchen with a sheet draped around my shoulders as he applied the clippers. I think sometimes he placed a bowl on my head, the better to guide his hand and ensure symmetry.

I don’t recall how many of my three brothers also had their hair cut by my father, but perhaps all did at some point.

My father never made much money teaching at a small liberal arts college (I think it was only in his later years that his income exceeded $10k/year), but he was adept at stretching a dollar. So was my mother.

Once in awhile I got to go to a real barber in a town a couple miles away. I would pedal my bike there, spokes of the wheels festooned with multicolored crepe paper. I didn’t bother to lock it as I parked it outside the barbershop. In fact, I don’t recall even owning a bike lock or chain. In those days we weren’t much worried about theft. We even left our houses and cars unlocked. They were rarely broken into.

While I sat and waited my turn in the chair, I would peruse various magazines and comic books while the vertical white, red and blue barber cylinder turned slowly on its axis outside the door.

One of the comic books I recall viewing was Superman. Superman first appeared in 1938 in comic books published by DC Comics, created by writer Jerry Siegel and artist Joe Shuster. He came from the planet Krypton, and possessed superhuman powers. He was discovered to be faster than a speeding bullet, able to leap tall buildings with a single bound, and more powerful than a locomotive.

His alter ego, Clark Kent, worked as a reporter for The Daily Planet in the city of Metropolis. His street clothes masked his Superman costume, which he displayed when he went about doing good for the people of Earth, his adopted home.

Little did I know how valuable those comic books would become. In 2014, a pristine issue of the 1938 Superman comic, with its original price of 10c on the cover, sold on eBay for $3.2M, easily making it the most valuable comic book to date.

Perhaps there is something in us that yearns for something greater than ourselves.  The French writer Voltaire (1694-1778) said if God did not exist, it would be necessary to invent Him.

And we might create Him in our own image—a reversal of the way it supposedly happened according to the first book of Holy Writ, which deals with the origin of man.

But what if, from the beginning of time as we know it, there really was a Superman? The Judeo-Christian narrative says there was.

In the Incarnation, over two millennia ago, an incomprehensible melding of the human and the divine occurred.

At times He showed just how human he was. as when He agonized in the Garden of Gethsemane before His crucifixion. At various times, He hungered and thirsted, just as we do.

At other times His divinity shone through, like when He turned five loaves and two fish into a repast for 5000.

There were other miracles.  Too many to mention.  And He was right.  Regardless how many miracles He performed, some would not believe.

He, too, had an alter ego.  For three decades, He labored under the guise of a carpenter from the town of Nazareth. Townsfolk thought they knew Him.  But they really didn’t.

There probably weren’t any tall buildings to leap at the time, and this was well before the bullet and locomotive had been invented.  But His superhuman powers were much in evidence, as when He transformed water into wine, healed the sick and leprous, and brought the dead back to life.

Both Superman, as created by Siegel and Shuster, and the Master, the Judeo-Christian Superman whose origin remains a mystery, came from somewhere else.

In the case of Superman, it was Krypton, a fictional planet. In the case of the Master (as George Lucas might have put it) it was a long time ago in a galaxy far away. Precisely where, we do not know, but it was probably from a place far beyond our own galaxy.

In the stories, both have the good of Earthlings at heart.

In the case of Superman, he intervenes in the affairs of man with his supernatural powers – of strength, of speed, of extrasensory perception.

The Master has all of these – and more – although He used them sparingly while on Earth.

Rather, He speaks in a still, small voice, designed to comfort and encourage us to do the right thing.  And, on occasion, he acts in a way that can be interpreted as either a miracle or coincidence.

Superman was a figment of someone’s fertile imagination. He lived during a set period of time and could only do so much to save the world, and that fictionally.

Our Master, the risen Christ, is not imaginary.  He is timeless, and saved our entire planet by a single act of unspeakable generosity.

Who could ask for a better Superhero?