Marching as to War…

Unlike the recent House condemnation and Senate exculpation of the American president that was entirely partisan, there are things that both political parties can agree on. The annual defense budget, passed recently by the House (377 to 48) and Senate (82 to 8) has strong support from both sides. Columnist Robert Koehler, on December 20, 2019, noted in his syndicated column[1] that the American National Defense Appropriation Act comes and goes with bipartisan passage every year with “at most, a few marginal cries of outrage and a big shrug from the media.”

Ted N. C. Wilson has published no comments on American militarism. The Statements page of the denomination lists opinions made when necessary “to articulate their understanding of certain important topics.”[2] This includes comments on military events far from Washington, DC, such as “War in Congo,” “War in Iraq,” and the previous “Crisis in Kosovo.” But expansion of military budget of the USA that has more than doubled [from $304,000,000,000 when Wilson assumed office to $738,000,000,000 this year] has not risen to “important topic?”

There are Statements on the “important topics” of Gambling, Age of Earth and Extent of Noah’s Flood, Tithe and Its Destination. There are Statements of opposition to–Same-Sex Marriage, Homosexual Relationships, Transgendered Surgeries, Abortions. But no concerns expressed by our church about America’s unrestrained expansion of its ability to massively destroy human life.

Not Just the Biggest 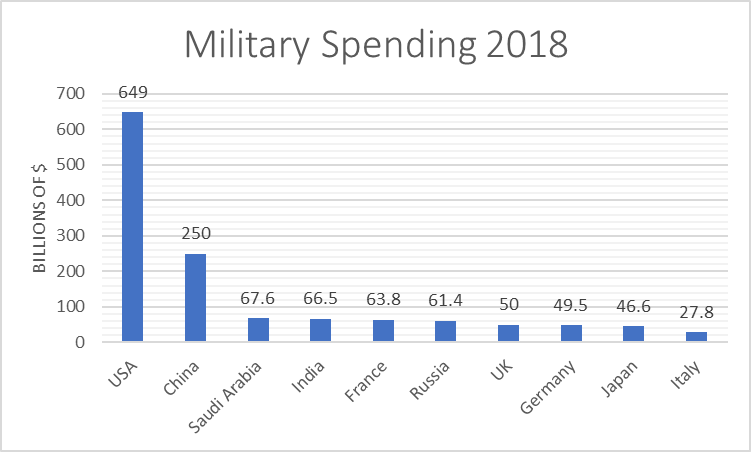 And the motive for this massive military budget? Concern for what might happen, fear of some dreaded but imagined future. And what does the fear for the possible future do to the present? It blinds our attention to what is happening right now. Koehler next goes way back and quotes a certain Charles Edward Jefferson (chairman of the Andrew Carnegie-supported United Peace Church back in 1909–Ellen White’s era): “Our militarized political focus remains upon perils which are fanciful and far away.” “Militarism…blinds statesmen to dangers which are imminent and portentous such as poverty and all the horde of evils which come from insufficient nutrition.” This was years before the organized mass-human-killing war machines of WW1, Auschwitz, WW2, Nagasaki, Hiroshima, Korea, Viet Nam, Iraq/Syria, or Afghanistan.

Our supreme business is not the scaring of rivals, but the making of friends.

Even way back then, “After each peace conference there was a fresh cry for more guns,” and “There was a fresh fury to perfect at once all the instruments of destruction,” but Charles Jefferson saw hope—perhaps, he urged, “The old program is obsolete. Those who wish for peace must prepare for it. Our supreme business is not the scaring of rivals, but the making of friends.” Tragically, the 20th century did not follow his advice.

Seventh-day Adventist publications of that day also prophesied against the expansion of military might. The following comes from our religious liberty publication, American Sentinel, January 27, 1898: “That wicked spirit of enforced militarism—miscalled patriotism—is becoming more widespread, and becomes more bold, unreasoning, and vicious, as it spreads.” And the next year, October 12, 1899: “From the Christian standpoint and from that of an American citizen, war, militarism, and the war spirit, are things to be shunned and protested against, always and everywhere. In the direction of militarism is the road that leads surely back to the despotism from which our fathers fled across the Atlantic to an unknown world. The road to military greatness is one upon which a nation early bids farewell to civil and religious freedom.”

Dr. Ellet J. Waggoner in the Adventist Review of June 21, 1898, sounds prophetic of the trenches of World War One starting a few years later. “When one stops to consider how the war spirit is dominating the nations of earth, and what its nature is, it will be apparent that there are indeed ‘perilous times’ ahead, and not far distant. The demon whom men call ‘the god of war’ is stern, harsh, unyielding, unrelenting, and mercilessly cruel. The groans of the wounded and dying, and the wails of widows and orphans, are music to his ears. Men call him Mars, but he is well represented by the ancient Moloch, that brazen image into whose red-hot arms living children were flung, while the beating of drums and the blare of trumpets drowned their dying cries, or mingled with them to work the multitudes up to the highest pitch of frenzy… It is so easy for the rulers to raise the cry of ‘humanity’ in justification of any war, or else there is always that magic word ‘patriotism’; and when a country is ‘Christian,’ it is readily argued that to defend its ‘honor’ is a Christian act; so that he who will refuse to disobey God’s law, ‘Thou shalt not kill,’ will be condemned as a traitor to God in his country, and that even by the ministers of religion.”[4]

Well, we say, “a country just needs to defend itself.” But is this “defense” or militarism? “Militarism is a belief that a nation should develop, maintain, and use a strong military to expand its interests. A militaristic country has a large defense force on which it spends a disproportionate share of its income. The society subordinates all other national interests to support a strong military…  Militarism and nationalism go hand-in-hand. Nationalists believe their country is superior to all others. They don’t join global organizations or collaborate with other countries on joint efforts. They use the military to defend their country. Nationalists find it easy to justify a large military to attack other countries because they believe them to be inferior.”[5]

“The money just isn’t there” for virtually anything that matters

When does the growth of military spending become a Christian concern? When “the money just isn’t there” for virtually anything that matters—such as healthcare for all, affordable college tuition, clean water, eco-sustainable energy production, a national minimum wage. “We’ve sold the national soul to 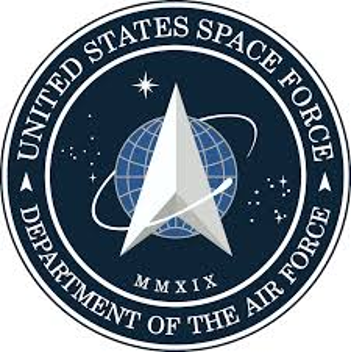 the war god,” asserts Koehler. “This year the National Defense Authorization Act… bequeathed the world an upgraded possibility of nuclear war [by allowing the administration to quickly deploy the new W76-2 nuclear warhead, a weapon specifically intended to be ‘more useful in a nuclear conflict’] and guaranteed the universe a future of bellicosity beyond the confines of Mother Earth [by creating an American military Space Force to ‘dominate in that environment just like all others’]… Militarism—American Militarism in particular—keeps claiming the future and seems intent on doing so until there’s no future left to claim.”

Ken Kimmell of the Union of Concerned Scientists is then quoted: “This bill accelerates the growing nuclear arms race with Russia. It fully funded almost every element of the Trump administration’s trillion-dollar plan to replace the entire U.S. nuclear arsenal with new, more deadly weapons that we do not need, and cannot afford…  [such as] the new W76-2 nuclear warhead—a lower yield weapon specifically intended to be more usable in a nuclear conflict. Weapons such as this one [weapons to be used not simply to intimidate] make nuclear war more likely and do nothing to enhance our security.”[6]

I know Paul said that rulers “do not carry the sword in vain”[7] but how many swords, and how many soldiers, should the emperor have? How much of a defense budget is needed for defense, and how much is to support a vast industrial military complex benefiting mostly the titans of Lockheed Martin, Boeing, Raytheon, Northrop Grumman, and General Dynamics?[8]

What of the prophetess herself? “The tempest is coming and we must get ready for its fury by having repentance toward God and faith toward our Lord Jesus Christ. The Lord will arise to shake terribly the earth. We shall see troubles on all sides. Thousands of ships will be hurled into the depths of the sea. Navies will go down, and human lives will be sacrificed by millions.”[9]

“Human lives will be sacrificed by millions.”

“Satan delights in war, for it excites the worst passions of the soul and then sweeps into eternity its victims steeped in vice and blood. It is his object to incite the nations to war against one another, for he can thus divert the minds of the people from the work of preparation to stand in the day of God.”[11]

“[T]he kingdom of Christ…is a new creation. Its principles of development are the opposite of those that rule the kingdoms of this world. Earthly governments prevail by physical force; they maintain their dominion by war; but the founder of the new kingdom is the Prince of Peace. The Holy Spirit represents worldly kingdoms under the symbol of fierce beasts of prey; but Christ is ‘the Lamb of God, which taketh away the sin of the world.’ John 1:29. In His plan of government there is no employment of brute force to compel the conscience.”[12]

Most all the strongly militaristic nations of the earth have had periods of domination, followed by sudden and catastrophic destruction. Robert Kaplan recounts some of them.

“(Arnold) Toynbee calls Assyria ‘a corpse in armor’ whose frame was held erect only by the massiveness of the military accouterments that smothered and killed the body of the Assyrian state. History is replete with ‘corpses in armor:’ Sparta, Alexander’s Macedonia, the Ottoman empire, and, of course, Nazi Germany, to name a few…The theme is always the same: Highly militarized and centralized states and empires, so indomitable in one decade or generation, hack themselves to pieces or are themselves conquered in another.”[13]

A United States of America who finds itself the most military nation in the world, with a budget larger than the next 10 nations of the world combined, should tremble at the prophecy of Jesus: “All they that take the sword shall perish with the sword.”[14] What responsibility do Christian voting citizens take when they vote for their governments? How will Kingdom of God politics and policies[15] subvert American militarism?

[1] Robert Koehler, http://commonwonders.com/militarism-the-delusion-lives/   This column was published in my local paper, and quotes not otherwise credited are from this article.

[15] It’s not hard to know these policies.  They are all found in the Seventh-day Adventist Hymnal #619. Lead on Oh King Eternal… “For not with sword’s loud clashing, nor roll of stirring drums, with deeds of love and mercy, the Heavenly Kingdom comes.”

Jack Hoehn is a frequent contributor to both the print and online versions of Adventist Today. He has served on the Adventist Today Foundation board since 2012. He and his wife, Deanne, live in Walla Walla, Washington. He has a BA in Religion from Pacific Union College, and an MD from Loma Linda University. He was a licensed minister of the Adventist church for 13 years when serving as a missionary physician in Africa.