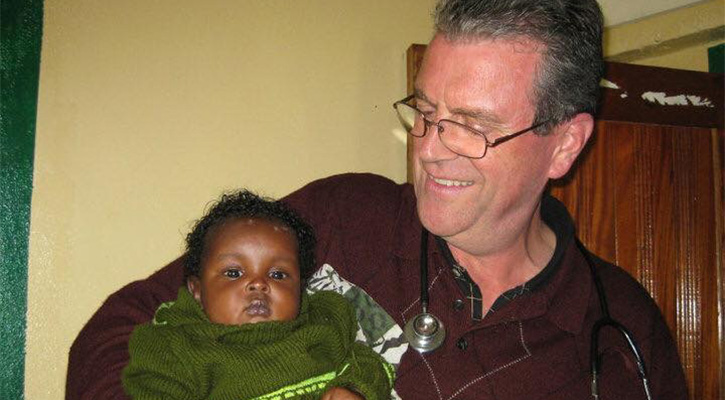 According to Maranatha, the retired family practice physician was part of a Washington state based team called SAGE, Seniors in Action for God in Excellence, an Adventist ministry focused on providing fellowship and service opportunities for seniors which partners with the construction mission trip coordinator, Maranatha.

Lauren died on Friday evening January 26, 48 hours after being airlifted from Costa Rica to a hospital in Seattle, Washington.

In an update on the Maranatha website the organization reported that Lauren fell off a ladder while painting the Bribri Seventh-day Adventist Church, in the southeast of Costa Rica on January 11. According to Maranatha, the cause of the fall is not clear.

Lauren suffered head injuries. He was intubated and put on a ventilator before being taken to a hospital in Limon, where a CT scan showed two skull fractures over his right eye and behind his right ear, and a large hematoma pushing the brain to one side.

Ken’s wife Linda and another team member, nurse Irene Street, along with team leader Elder Bob Grady, Maranatha area director Manuel Cabrares and the local Adventist pastor, joined in an anointing service for Ken before he was taken by ambulance to a new and very modern hospital in the capital city of San Jose. While there he underwent a four-hour surgery to reduce swelling by removing as much of the hematoma as possible, and to repair a tear in the dura surrounding the brain. He was kept in a coma ahead of plans to fly him to Seattle for further treatment.

The group was in Costa Rica to put up three one-day churches and paint four others that were finished, though work has been delayed by a storm night that closed roads with mudslides and downed trees. They were also holding two series of evangelistic meetings and Vacation Bible Schools.

“This whole trial has been difficult, but God has not left us alone, and we know that,” said Jenny Bollinger, Lauren’s daughter, to Maranatha. “I’m holding onto the fact that God will work all of this out for the best for us all!”

Lauren had previously credited Maranatha with his return to the Adventist Church after a period in which he had distanced himself from the denomination.

In 2000, Lauren went on his first Maranatha service trip. It was a transformational experience. “I began to really see people for who they were. They were ambassadors for Christ. They were loving Christians. It really opened my eyes to the Adventist experience,” said Lauren at a 2004 Maranatha convention.

When the first project came to a close, he told his wife that the mission trip was “probably the closest experience to heaven that I’ve ever had.”

A memorial service will be held on February 24, at 3 p.m., at the Kirkland Seventh-day Adventist Church, in Kirkland, Washington. Messages of condolence can be posted on the Facebook page “Ken Lauren’s Journey.”

Maranatha, founded in 1969, coordinates more than 60 mission trips a year, creating volunteer opportunities worldwide. According to Maranatha’s website, the organization mobilized more than 2,200 volunteers to more than a dozen countries.