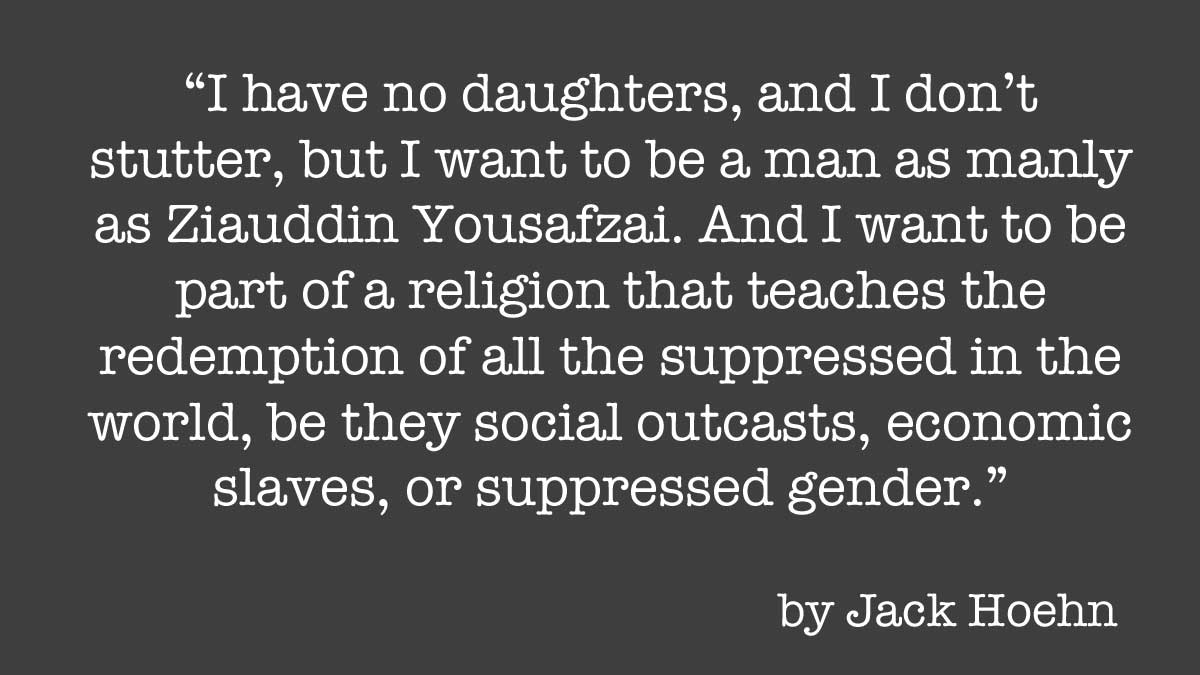 My Union President is meeting the General Conference men this week. More than prayer and fasting is needed.

Malala Yousafzai is a Pakistani girl who was shot in the head because her religion didn’t want girls to become educated. The Taliban fundamentalists wanted girls to go to religious schools and be taught by their theologians and then return to women’s assigned tasks of washing, raising family, satisfying their male lords and masters, and covering their heads and faces like good little girls should. No more education necessary, and further, no more education permitted.

She recovered with left-sided facial paralysis after coming out of coma for weeks, and with half her female brain is an articulate, kind, and a world-recognized spokesperson for the suppressed, restrained, and uneducated girls of this world, held in suppression not by God but by the Taliban and their allies.

She covers her head in deference to God, but doesn’t feel whole as a person to have to spend her life covering her face, partly paralyzed by her assassins. When I cover my face I feel I am hiding who I am as a person, she explains.

Director Davis Guggenheim has made a movie about her called He Named Me Malala, featuring the fact that her father, a schoolteacher called Ziauddin Yousafzai, named her for an Afghanistan woman famous in that culture like a Joan of Arc who roused the men to fight the foreign invaders. And as she tells her story it becomes clear this is not only the story of a courageous girl, but of her father as well.

He has a stutter and was thought to never be able to speak in public by his father, but by persistence he memorized a speech as a child and stuttered through it with great emotive effect to his village audience, who found him a moving speaker in spite of the stutter. Ziauddin valued the gift and power of being able to overcome his stutter and move people with words. He became a schoolteacher and opened his own school, starting with three students, but soon became a very busy and valued place of learning in his town. When his own daughter was born he named her for a brave woman, and when the Taliban moved into his village offering at first a godly fundamentalism, like all the village he was interested.

But when their godliness became a front for their power seeking and manipulation of society, when they began to burn books and read aloud on the radio the names of sinners not falling in line, Ziauddin felt his honor as a man required him to speak out against their cruelty and destruction not only of books, but of humans. Bodies were appearing in the market place that had been called out on the fundamentalist radio. Notes were attached to severed heads and shown to children that said, If you oppose God’s work this will happen to you.

So Malala’s father became a public speaker in his town against the evil bent of the Taliban. And educated his daughter and encouraged her to blog and post with her pretty face and youthful sincerity as a public advocate for the education of girls and women. Her words and personality attracted world attention and she was nominated for the Nobel Peace Prize.

The Taliban men suppressing opposition to their religion paused before killing the public and well-known father, but like the closet cowards they are they attacked and shot in the face his little daughter. Malala Yousafzai became, in her coma, a cause célèbre, and was transported to England with her mother, her two brothers, and her anti-Taliban father, where she finally woke up and now lives the life of an English schoolgirl.

Malala was a beautiful girl, and she is now growing to be a courageous and world-changing woman. Her life is a testament also to her stuttering but courageous true man of a father. A man who put his own life on the line because it was the noble, brave, and honest thing to do.

And a man who educated his daughter, and encouraged her advancement in public life and mission. Shooting his beloved daughter was much crueler and more demonic punishment to him than it would have been to decapitate him. But as real men must, he takes what life has given him, and the work of redemption of girls and women from the ancient suppression they have been held under is now a partnership of a stuttering father and a wounded daughter–true Muslims against the patriarchy of the Taliban fanatics.

I have no daughters, and I don’t stutter, but I want to be a man as manly as Ziauddin Yousafzai.

And I want to be part of a religion that teaches the redemption of all the suppressed in the world, be they social outcasts, economic slaves, or suppressed gender.

The men administering Adventism in North America have been summoned to meet Ted Wilson on Unity of the Church, which is a blatant cover for enforcement of no recognition of women as capable of leading the church of God

The men administering Adventism in North America have been summoned to a meeting with the men who are in positions of authority in the General Conference.  Division and Union men are summoned to meet Ted Wilson on Unity of the Church, which is a blatant cover for enforcement of no recognition of women as capable of leading the church of God. Male headship is the ugly face of the fall—it caused inequality of men and women that began to be reversed by Jesus of Nazareth and his early followers, who introduced this fallen world to words never before spoken in public or written into literature: “For as many of you as have been baptized into Christ have put on Christ. There is neither Jew nor Greek, there is neither bond nor free, there is neither male nor female:  for ye are all one in Christ Jesus.”

The fine man in charge of the North Pacific Union has asked for two days of fasting and prayer before he and his other male partners (will they permit the Southeastern California Conference President Sandra Roberts to attend?), are confronted by the manipulations of the General Conference. I hope it clears his mind to be as brave before female oppression as was Ziauddin Yousafzai when confronted by the Taliban.

Prayer and fasting are of course very important for the Taliban; they do it for a month every year, and then go out and shoot little girls in the face, and like Gestapo criminals cowardly attack male opponents in the night, dumping their bodies into the market place to terrorize the morning shoppers.

“Is not this the kind of fasting I have chosen: to loose the chains of injustice and untie the cords of the yoke, to set the oppressed free and break every yoke?”