Love Without an Asterisk 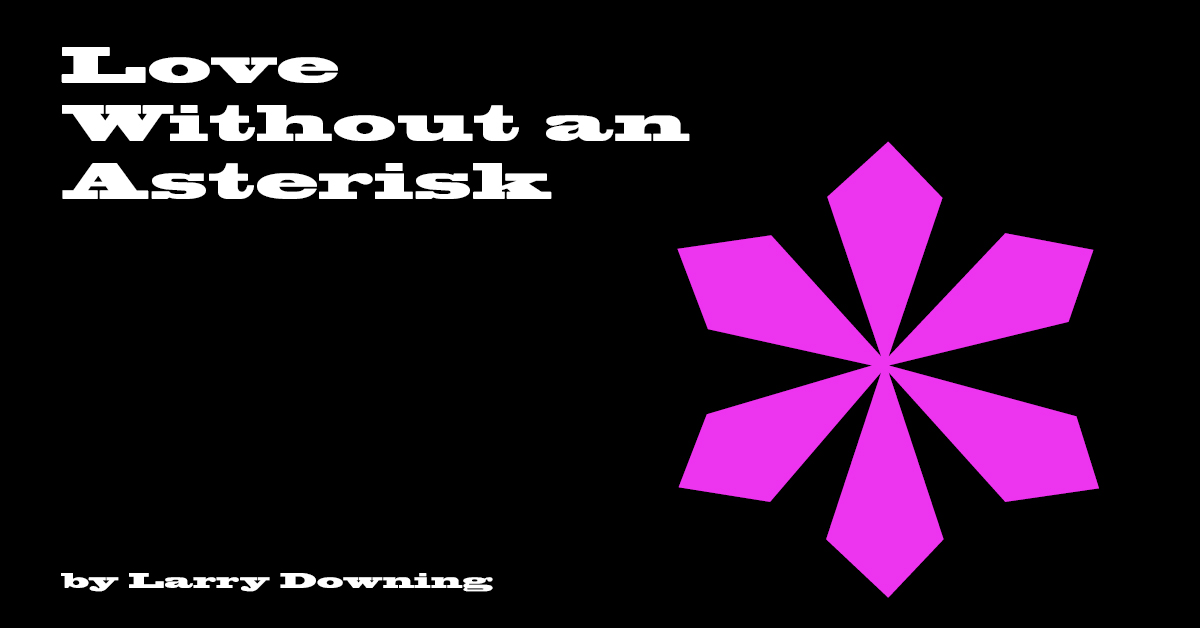 On occasion one sets about to compose a tightly connected essay, only to have it fragment or spiral to an abrupt, disjointed end. I fear this piece, upon which I have set myself, illustrates the point. Despite such a fate, welcome aboard and perhaps, with a bit of luck, the point will out.

Earlier this year the University of Southern California (USC) sent its alumni a copy of a conversation between Adam Popescu and (USC) alum Steven Spielberg, published in the December 18, 2018, The New York Times.

As the conversation between the two developed, Spielberg observed that there has been an increase in anti-Semitism and a marked increase in xenophobia. Who can argue? Hate has become the force employed by twisted zealots to direct their deadly venom toward groups and individuals they perceive pose threat to their ideology and practice. The Holocaust, the Nanjing massacre, the Stalinist era, the Armenian genocide, the Chinese Cultural Revolution, the massacres in Rwanda, Cambodia, the Central African Republic, the ethnic cleansing to remove the Rohingya from Myanmar, and the current anti-Semitic violence in Europe stand as demonic monuments to human depravity. The atrocities are distanced from us, both physically and emotionally. Or are they? In our electronically connected world, geographic distance is irrelevant. While seated in our comfortable living room chair, we witness in real-time massacres and wars that mar and destroy men, women and children in nations remote from ours. We may turn away from the brutality to assure ourselves we are not part of the carnage that plagues our world, only to confront other dastardly deeds, perhaps even more troubling than those in far-off places we sought to ignore.

Children are murdered on our streets and in our schools. Men and women are gunned down and run down by vehicles. We wince when we see children with arms amputated by renegade warriors who claim affiliation with “the Lord.” We turn in horror and disgust when the evening news reports another grenade has blown a vehicle to smithereens, body parts flying about like leaves in storm. We give thanks that we have not been caught up nor participated in such atrocities.

Or have we over-reached in our attempt to ignore or recuse ourselves? Might we have our own private, protected fields of conflict that any who trespass upon do so at their risk? Hatred is expressed in ways other than murder or overt and direct action. Attitudes, behaviors and words well serve to denigrate, demean and diminish other human beings. We need not look far to test whether this be so or not.

Confession time: I grew up in a California home situated in a well-functioning and secure environment. I was not aware that my parents and other relatives were insensitive or hateful toward individuals different from us. The word prejudice was never spoken and, had someone suggested any of us were prejudiced, the charge would have been stoutly denied. My dad would likely have said something to the effect that he grew up playing with people of other races—and he would probably have used common slang words to designate the race or ethnicity of kids he grew up with. None of us would have thought anything about his definitions. Should someone have been identified as a homo? The word, among us kids, generated all manner of puzzled speculation and wonder.

As an aside, Cousin Billy, my fraternal grandmother’s distant cousin, was the first gay person I recall meeting. (The word gay in that day still referred to one who was happy, care-free or pleasant.)

Cousin Billy came from Chicago. He arrived at my grandparent’s Watsonville, California, house in a taxi. I do not recall any word spoken that hinted at Cousin Billy’s sexuality. What may have occurred is someone said something to the effect they thought Cousin Billy a bit strange. He was, after all, reaching toward middle age and still single. Years later, as a young adult, I reflected back upon Billy’s visit and asked my mother if the family thought he was a homosexual. She affirmed this was so, but stressed no one knew for certain.

Deep in my five- or six-year-old mind is the puzzle associated with Cousin Billy’s coming into my grandparent’s home hoisting a large package that he placed on the hall-way floor. From that package he pulled forth a blue and white figure, which I learned later was a statue of the Virgin Mary. I watched in amazement as he carefully placed the Virgin in the downstairs closet. This was the first “idol” I had seen close-up. When I questioned my mother about this strange figure, she explained that Cousin Billy was a Catholic and he prayed to this stature. This explanation made it clear: Cousin Billy worshiped an idol; therefore, he was heathen. I do not recall observing Cousin Billy offer devotion to the virgin, nor am I aware the Virgin Mary ever came out of that closet.

A lifetime later, in our time, the childhood tapes continue to spin. I can deny or attempt to ignore their contents, or wish them away, but they continue their irrepressible mantra. What I am not compelled to do is now verbalize or act out what once was spoken or heard. I can accept that my past is marred by what I now reject. I can choose to practice what is consistent with present beliefs and hopes, and deny that which is inconsistent with present understanding and intent.

Specific areas where this determination has relevant application include attitudes toward equal rights for all, including women and members of the LGBTQ community. We Seventh-day Adventists fall short here. It is past time to change our attitudes, behaviors and purposes towards those we have marginalized or ostracized. When we have turned our back on the disenfranchised or those from minority groups, we are guilty of operating from a position of hatred that is incompatible with what scripture teaches us about love toward all God’s family. We claim to love all God’s children, but stick an asterisk after certain ones, and it takes on the look and practice of hate. The asterisk nullifies the gospel and negates claims to inclusiveness and equality.

Will it be matter of simple choice that will suddenly bring about change in attitude and practice? No! Many will struggle. The old tapes continue to run, but we can deny what they play! A choice of will is the control mechanism. We can choose to respect and accept those we once rejected. We can choose to deny what we once practiced or believed. We are called to lift up our heritage of social justice and reach out to those whom we have denied and affirm, “We are with you. Help us to know you. We need you to teach us where we have failed and how we can do better.”

One other matter before the final sentence: to say we are sorry for our past thoughts and actions towards you is but half the equation—if there be grace sufficient, forgive us our sin.

Old sin dies hard, but die it must. Let there be an honorable funeral for that which has passed.