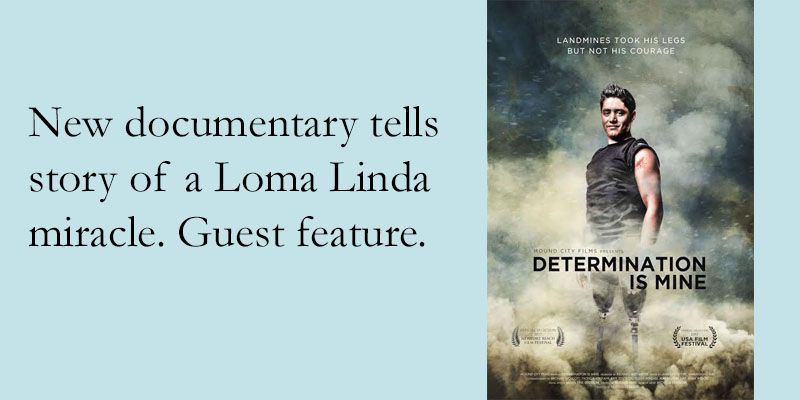 Film will have its second and final festival screening on April 27 in Costa Mesa.

LOMA LINDA, CA – April 19, 2017 – “Determination is Mine,” a documentary short about one Afghan boy’s journey to one day walk again after losing both his legs after stepping on a landmine, has been accepted into the Newport Beach Film Festival. The film features a team of Loma Linda University Health clinicians dedicated to the care of Malek Mohammad.

When he was 15 years old, Mohammad set out to collect firewood for his mother so she could cook dinner. As he stepped into a field, Mohammad fell victim to two landmines. His legs, stripped from his body, lay several feet away from him. Two years later, in 2008, he came to America filled with hope. His goal — to return home to Afghanistan walking.

The 35-minute film follows Mohammad as he travels from his hometown to Loma Linda, California, where he would live for two years as he received extensive treatment for his injuries at Loma Linda University Health in hopes of one day walking again.

Produced by Mound City Films, “Determination is Mine” captures the essence of Loma Linda University Health’s mission “to make man whole.” In addition to medical care, Mohammed is introduced and adapted into a whole new culture. He built a life during his time in Loma Linda – he attended school, made friends, and joined PossAbilities, a free community outreach program that offers disabled individuals who were born with or have permanent physical injury a sense of community, as well as offer activities and practical direction to help them lead an active, fulfilling life.

Director Patricia Kelikani captured footage and interviews both in Loma Linda and Afghanistan to create the film. “It was an honor to tell Malek’s story of courageous transformation,” she said. “His determination to never give up encourages viewers to keep going despite whatever challenging circumstances we face.”

“Determination is Mine” will be screened at the film festival in Costa Mesa Thursday, April 27 at 7:15 p.m. Tickets are $15 and can be purchased online.

PHOTO CAPTION: Malek Mohammad on the poster for the movie “Determination is Mine,” a documentary short that has been accepted into the Newport Beach Film Festival.