The Living Project: The Power of Story

By Debbonnaire Kovacs, Feb 18, 2015    One Sabbath School class at the Glendale City Seventh- 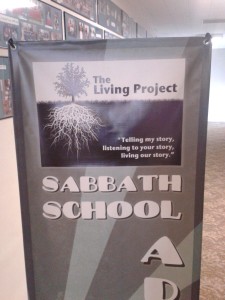 day Adventist Church in Los Angeles, California, is all about the power of story. The class is called The Living Project. Here is a photo of the sign outside its door. (The partial word reads “Adult.”)

Over the three years the class has met, some have come and gone, finding the group not for them, but a core group of six to eight have met continuously, and the group usually averages about ten or twelve people. One of the three core leaders will have prepared a topic of discussion, and will set the ball rolling, usually by asking the group what has impressed them during the past week, concerning the topic du jour. It could be something from the last meeting, that has been perking away all week, or it could be any incident or emotion from someone’s daily life. The discussion takes wing almost immediately, as individuals share stories and listen to each other with love. It’s not uncommon that the leader will let go of the prepared topic entirely, trusting that the Spirit is leading where they need to go that day.

The result is a circle of trust that is quite tangible in the room. When I visited recently, I felt it strongly, and would love to go every week. The topic this week was the fear that prevents the true joy God plans for our lives. In less than an hour, we ranged from bereavement to infantile development of emotion to a new ministry someone was starting. I left filled with joy and whispering, “This was great, this was so great!” I want to begin a Living Project class at my church. So I called the man who led the group the day I was there and is one of the founders of the gathering, and asked for more information.

Naturally, he told a story.

Michael Helm reports that he was raised in a mixture of Mormonism and Catholicism until he was about sixteen or seventeen. From that point, he became interested in Eastern mysticism, experimenting with Buddhism and the writings of Deepak Chopra, among others. Then he became interested in Scientology and Dianetics, studying these systems throughout his twenties. He left them behind around the age of thirty, describing his time in Scientology as “turbulent” and saying that he felt the need for a sort of spiritual “cleaning out.”

In his teens at school, he had been good friends with a girl named Ingrid, and although they had gone their separate ways, they now found each other “through a fluke, on social media.” They picked up their relationship, “at least 150 pages” to each other in emails over the course of six months, “fell truly in love, and got married a few months after that.”

“Being with her,” Helm says, “sort of rekindled and sparked an interest in going back to and understanding what I considered my roots, which was Christianity.” He asked to go to church with her and her family. At the time, they were attending the Vallejo Drive SDA church, and Helm was introduced to Smuts Van Rooyen. “We hit it off, and began to study together weekly, asking all kinds of tough questions, and it became a really neat relationship. He went straight to the New Testament with me, and we tried to tackle some of Paul’s stuff.

“He was a spiritual mentor for me. Our conversations were about my relationship with God more than denominational discussions. We never had any of those! Smuts’ thing was radical grace and a person coming to a place where they would encounter Christ in a space not unlike the song Amazing Grace. I think his hope was that people would find Christ in that way. His confidence, his faith was in the grace.”

Because of his friendship with Van Rooyen, and because of the things he learned and the growth he experienced, Helm was baptized into the Adventist church by Van Rooyen, but he felt, and continued to feel for a long time thereafter, that something important was still missing from his life.

“I felt like something wasn’t finished in me. I didn’t by any means want to invalidate the work Christ had done, but…I didn’t feel the profound change in my character that I thought I would….I felt a void, a gap.”

Helm reports that he almost reached despair, and began to pray fervently about his relationship, or rather the lack of relationship that he felt, with Christ. “I thought, I have this extraordinary relationship with my wife. We are soulmates. Can’t I at least have that much with Christ? Can’t I know him on a personal level, at least as well as I do my wife?”

He shared his concerns with Ingrid, and she felt the same lack. They both prayed earnestly to be led to a deeper relationship.

Helm makes a point of cautioning, “When one begins to search for the wisdom of Kabbalah and or Chassidut, many different ‘schools’ can be found, many of which claim to be authentic [that is, authentic Jewish sources]; and perhaps many of them are, to a greater or lesser degree, authentic. For me, I’ve found authentic sources when my love for God is strengthened as a result of my engagement with those sources.” (Interested readers will find some links that Helm recommends at the end of this article.) He also stresses that this may not be the route for all people, but that all should continue praying for that depth of relationship, trusting God to lead them.

By the summer and fall of 2011, Michael and Ingrid were beginning to come to a place “where there was a real nice synthesis happening in our hearts and minds. When you can come up with analogies between the spiritual and the physical, you’re really beginning to understand at a deep level.” They were beginning to long to share the treasures they’d found. Not only that, they were feeling an urge to share, which they felt came from the Holy Spirit. They had a new pastor, Todd Leonard, “and he seemed just bold enough to allow us to start group where they could study these concepts.”

When they asked Pastor Leonard about it, they were surprised when he said, “Wow, that’s great! It just so happens I have others telling me the same thing, and I want to start a different kind of group, too!”

So they met, about a half dozen people at first, to hammer out what sort of group they wanted. They knew they didn’t want argument and debate. They didn’t want a person to share something, only to have another person say, “Well, I disagree with that,” and begin to propound his or her own theory of “correct” theology. What they wanted was to feel connected. To tell their stories.

“We realized all of us who had come together to start this group had personal stories. That would probably be the launching for us. The concept of personal storytelling. We wanted our group to feel safe and to build confidence that this was a place where we could share. Perhaps through this very personal sharing, we would come to find and realize a connection between all of us. We felt that ultimately, in that connection, we would find our Creator,” says Helm.

They came up with the name, and one member came up with “this awesome statement” which now forms the body of their sign: “Telling my story, listening to your story, living our story.” And from the beginning, they met in a circle. “Like a cell, like a living thing. The circle has a center, but none of us sits there—the center is nucleus, and the nucleus is God.”

Kabbalistic Writings On The Nature Of Masculine And Feminine