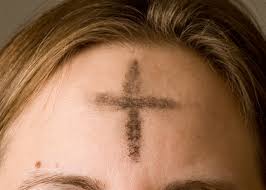 As I write this, it’s Ash Wednesday. I used to have a vague idea about Lent (you gave something up for 40 days) but I really never knew anything about Ash Wednesday. When I began attending a local multi-denominational church in my town I was, as I’ve mentioned before, going through an especially traumatic time in my life. So, as Lent neared, I decided I’d try participating fully in this season of sorrow and reflection, and see what blessings I might find.

Years before, I had learned to love the writings of Lutheran pastor Walter Wangerin, and I remembered being struck by something he wrote: words to the effect that those who don’t go through the sorrow of the season before Easter may not fully understand and participate in the joy of that resurrection. “If you don’t weep with the women, you can’t sing with the angels.” Something like that.

My first Ash Wednesday was an eye-opener. Or more correctly, a heart-opener. For one thing, did you know that the ashes of Ash Wednesday are created from the palms of the previous year’s Palm Sunday? They are saved, and in a ceremony before Lent begins, they are burned to ash. That represents the fact that our highest praises and finest acts are, as the Old Testament prophet puts it, like filthy rags; that is, our best intentions soon turn to ashes.

Those palm ashes are then mixed with olive oil, which throughout the history of God’s people has represented the Holy Spirit and grace. This represents forgiveness and the chance to start again. The “imposition” of the ashes is received in a cross form on the forehead or hand. I find this incredibly meaningful, especially given the significance of forehead and hand as thought and action that I have always been taught in the context of Revelation and the end times.

Before the Ash Wednesday service, the pastor had laid out a simple square labyrinth on the floor of the fellowship hall with blue painter’s tape. That night at the service, he took a bowl of oil-bathed ashes, and quietly walked to the center of the labyrinth, pausing to pray at each turn. Once he reached the center, he stayed where he was, and each person present was invited to walk to the center, receive the ashes or a blessing, (their choice), and quietly walk out of the labyrinth. After we were all finished, the pastor walked the rest of the way out.

There was music and prayer and fellowship. There were laughter and tears. But the beauty I remember most was in that ash ceremony.

The weeks of Lent followed, and I struggled, with my hand in Christ’s, through some very dark days, but the light of hope shone around me. Then came Maundy Thursday.

That same pastor preached with an intensity I either have not heard before, or have not responded to so strongly, possibly in part because of those weeks of preparation. It was only a 5-10 minute homily, so it’s more deeply imprinted on my mind than any wearisome 30-60-minute sermon could be. “There he is, on that cross, there by choice!” The pastor rocked up on his toes and clutched the sides of the pulpit, leaning forward earnestly and catching the eyes of his listeners in the dim candlelight. “There by my choice! There by your choice! There because we choose to create and participate in systems that refuse freedom or dignity to God’s created and beloved children! There because we prefer lists of rules to love or grace!”

It wasn’t until later that I realized how odd it was. I was always taught that “those liberals” don’t have a sense of sin—that they are all about conditional morality and situational ethics. That they don’t know God. That they are lost. Probably. “We can’t judge, of course,” those who teach this stuff would say righteously.