Yen Ang had no idea what she was starting. Naturally, Yen read her toddler, Zoei, stories, let her look at picture books, and let her listen to children’s songs. And naturally, as a Christian family, they sang, played, and listened to hymns. But Yen also found beautiful music on YouTube, including, fatefully, a rendition of “The Lord’s Prayer,” the Albert Hay Malotte version most people know and love.

“That was nice,” Yen told me during our Skype interview. “I thought I’d let her listen to that, too.”

Yen Ang was born in Malaysia to Chinese parents, but her parents emigrated to Canada when Yen was a small child, and she grew up in Canada and the United States. When Zoei was little, Yen and her husband, Wesley Toh See Wei, were at Loma Linda getting their higher education.

And Zoei, playing around the house and learning the things two-year-olds learn, was listening to, among other things, “The Lord’s Prayer.” Within a couple of weeks, Yen was startled to hear her baby singing the song. As she listened in amazement, Zoei sang the whole thing, with all the drama, flair, and timing of its YouTube performer.

“I couldn’t believe it!” Yen told me. “Her grandmother in Malaysia had never met Zoei yet, so I decided to record her singing for Grandma.” She set Zoei on the kitchen table and told her, “Sing it again!” Yen put the song up on YouTube for her mother-in-law and sister-in-law to enjoy, and sent them the link.

The rest is history.

“We started seeing people clicking; ten, then twenty, then millions. We were shocked! We never thought of it, never wanted her to be a singer or anything. That was not my intention. We discovered her talent purely by accident,” Yen said.

You have most likely heard Zoei singing “The Lord’s Prayer” at two years of age. (And if yours is not, in fact, one of the more than 11 million views Zoei’s song has garnered, you can find that link and others in our Music department this week.) What you probably didn’t know is that the child is from an Adventist family.

“We always play a lot of hymns at home. One day we were talking with some friends at church after potluck, and we all heard the baby singing ‘The Old Rugged Cross’!”

Yen told me some of her Loma Linda friends said, “She has natural musical talent; why don’t you try piano?” Yen tried to get her lessons, but the teacher said to wait a little longer.

At three, Zoei Toh started piano lessons. She also sang more songs for her family and the family posted them for their faraway relatives. And she started getting so popular that agents began calling.

“We did not invite those attentions,” Yen says emphatically. “There were a lot of inquiries and invitations. The agent for the Jonas Brothers contacted me through YouTube. She was only three, and they said, ‘Bring her to Hollywood, bring her to our studio, we want to interview her!’ I prayed about it and felt uncomfortable. I don’t think it’s what God wants her to do. You see these prodigies, and they grow up all screwed up. I want her to have a childhood. Quite a few agents have approached, but I always say no. The only public appearance was through Carole [Derry-Bretsch]. She was singing with the Family Reunion Music Concert for Vision Builders, when Zoei was four. It was at Palm Springs, only a couple hours away, so I felt comfortable; it was for God, and it was for fund-raising. But at the event I was so nervous!” Yen laughed. “I was freaked out—I thought she might cry, she might want to go potty; I told Carole how scared I was, and she said, ‘Don’t worry, I’ll be right there, it will be all right.’ Carole accompanied her.”

Zoei, now eleven, was part of our Skype interview, too. She says she remembers the practice on the stage, but doesn’t remember the actual singing.

That same year, 3ABN taped Zoei singing some songs in a studio, including, Yen remembers, “Silent Night,” and used the songs throughout the year whenever they fit into a season or theme. But Zoei only saw the recording studio. So, that Family Reunion concert is the only public performance Zoei has ever done, unless you count singing special music at church. 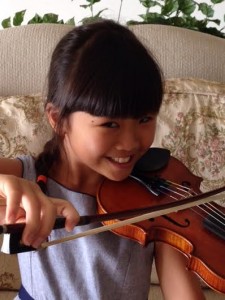 Not long after that, See Wei, now with a doctorate in Public Health Administration, was asked to be the hospital administrator at the Penang Adventist Hospital. It meant going back to family, where Zoei could get to know her grandma in person. Aside from a year and a half back in the US a couple of years later, the family has remained in Malaysia, where Yen, with her doctorate in Nutrition, works as a dietician. Since they no longer needed to post to YouTube in order for her family to see her, they mostly stopped posting at that point. Zoei’s talent has turned to singing and playing (both violin and piano) special music for the Penang Seventh-day Adventist church.

Yen said that as Zoei is growing older, “becoming a person of her own,” she is getting more self-conscious. “At two or three, there was no public awareness. She was very enthusiastic, and I think that and her innocence were what endeared her to people’s hearts. Now, she asks, ‘Did I do that wrong?’ or worries, ‘People are looking at me.’ She’s growing and maturing. I don’t want to push her. After all, most importantly, I want her to sing to praise God. I let her sing at church, and let her develop at her own pace. It’s not good to push. I do tell her that singing is a talent that’s God-given, and she should use it for God.”

I asked Zoei for her opinion. She said, “When I sing now, my church puts it up on YouTube. My mom doesn’t put them up, just church, whenever I sing for church. I’m fine with that. I am just nervous when I see people in front of me.”

She doesn’t think music will be her career. “I want to have another job and just sing for fun.” But she doesn’t have any ideas yet what that job will be. Right now, she attends an American School, in which she took (up until fourth grade) one class per week in conversational Malay, and says she can speak “a little.” And when Grandma comes to visit, she has to speak Chinese. She seems like a lively, happy girl, enjoyed our chat on Skype very much, and later sent me a picture of her dog. She has two, a Pomeranian and a Pekinese, and told me playing with them and reading are two of her favorite activities outside of music.

Today, Zoei’s piano talent has even outstripped her singing talent. You can see quite a few videos of her on YouTube, generally posted by the Penang church. You can also see a few in our Music department this week.

Her mother says, “Her unintended ministry has touched many lives, and that has made us most happy. To us, that was the best. The video was totally home-produced, and God used it to touch so many lives. I tell her, God gave you a gift, it’s a favor you want to return to him; always do it in a way to glorify God.”