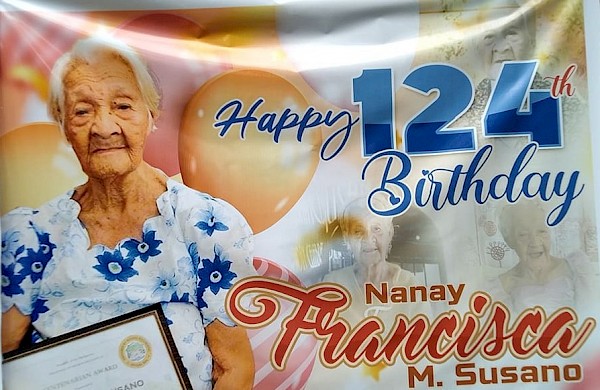 25 October 2021 | From the Southern Asia-Pacific Division:

Life is short, they say, but there are a privileged few who seem to live longer than most of us do these days.

Born on Sept. 11, 1897, Montes-Susano is recognized by the Philippines government as the oldest centenarian in the country. A faithful Seventh-day Adventist, Montes-Susano loves playing her harmonica and singing hymns. Her favorite song is “In the Sweet By and By.”

In her younger days, Montes-Susano enjoyed hiking and would often narrate her experiences during World War II. Even at this age, Montes-Susano, or Lola (Grandma) Francisca, as she is known, still loves to tell stories of bygone days and calls her children by name.

Recently though, she has weakened considerably. She still goes to bed early at 7 p.m., but wakes up at 1 a.m. to eat her porridge oats. What used to be 10 spoonfuls has dwindled to 2. She can barely move her body and cries in pain whenever she tries to change position. Her great-granddaughter, Rosalie Himaya Muleta, bathes her every morning and gives her fruit juice every day to sustain her.

Lola Francisca’s eldest daughter, Magdalena, is also a centenarian. Magdalena celebrated her 101st birthday this May. The Lord blessed her with four children from her first husband, and seven children from her second husband. When the second husband also passed away, she married a third – a farmer. Magdalena can hardly hear and speak now, but her influence of being a faithful mother who led her children to church every Sabbath has been passed on to the next generation.

Magdalena and her family went through a lot of hardship that she believes strengthened their faith. They went through a period of famine when revolutionaries burned all the farms in their area. They hid in the bushes from 5 in the evening to 5 in the morning so the rebels couldn’t find them.

Magdalena believes it was prayer and faith in God that preserved her and her children. She is thankful to her mother, Lola Francisca, for leading them on the right path all those years.

Both Lola Francisca and Lola Magdalena believe that their healthy lifestyles, their faith in God, and God’s faithfulness made it possible for them to live this long.

This article has been edited by AToday staff.

(Photo: Francisca Montes-Susano celebrated her 124th birthday on Sept. 11, 2021. Her daughter, Magdalena, turned 101 in May 2021. Photo via Southern Asia-Pacific Division.)