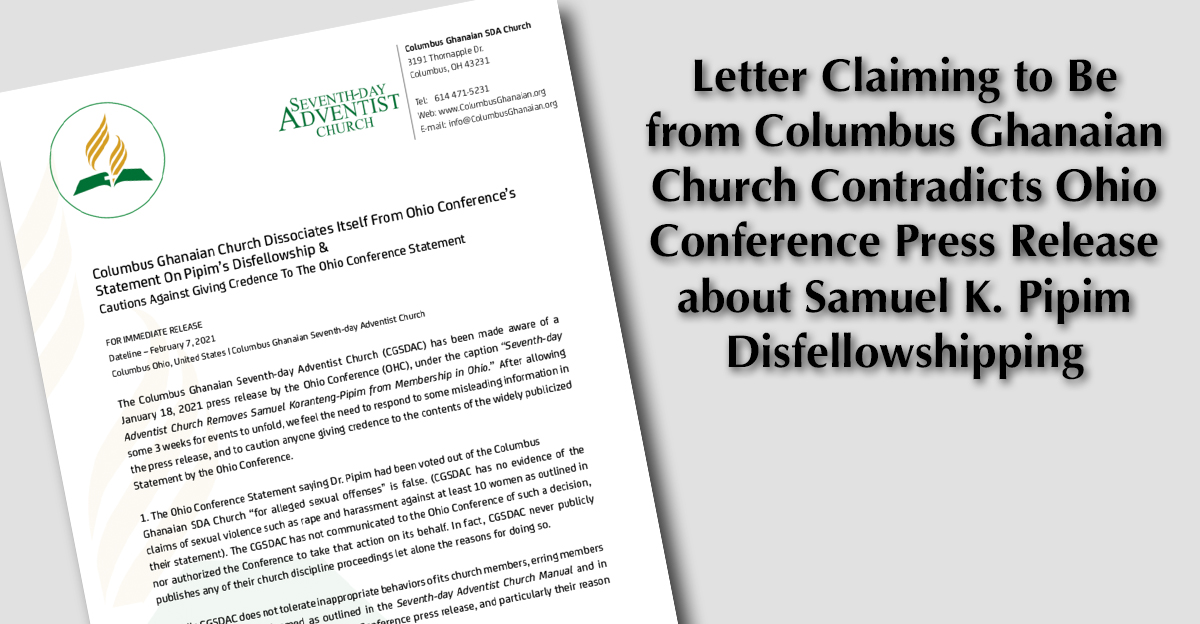 A statement being shared widely on social media on what appears to be Columbus Ghanaian Seventh-day Adventist Church letterhead claims that the church was railroaded into the decision to disfellowship Samuel Koranteng-Pipim announced in mid-January. The statement, titled “Columbus Ghanaian Church Dissociates Itself From Ohio Conference’s Statement On Pipim’s Disfellowship & Cautions Against Giving Credence To The Ohio Conference Statement,” is unsigned, leaving the actual author unknown, and providing no evidence that it was produced by the congregation or its board.

That it has no identifiable author or signatories suggests the statement may not be what it claims to be, though the Columbus Ghanaian Seventh-day Adventist Church (CGSDAC) has not disavowed it. The Ohio Conference of Seventh-day Adventists is not making a comment at this time.

You can read the statement here.

The statement claims that the earlier Ohio Conference press release contains misleading information, and that the congregation was not a full participant in this process:

The Ohio Conference Statement saying Dr. Pipim had been voted out of the Columbus Ghanaian SDA Church “for alleged sexual offenses” is false. (CGSDAC has no evidence of the claims of sexual violence such as rape and harassment against at least 10 women as outlined in their statement). … The basis of the Ohio Conference Statement is questionable. The argument is flawed, and without precedence, which is alarming. The contents of the press release are factually defective and misleading. The potential damages ramifications, and/or consequences of the Statement are incalculable.

Claims in the letter against the Ohio Conference include:

The statement also alludes to “an avowed personal adversary of Dr. Pipim during the past decade” and “folks who are pursuing certain theological views that differ from Dr. Pipim’s,” leading to speculation that Dr. Pipim himself had a hand in crafting the statement.