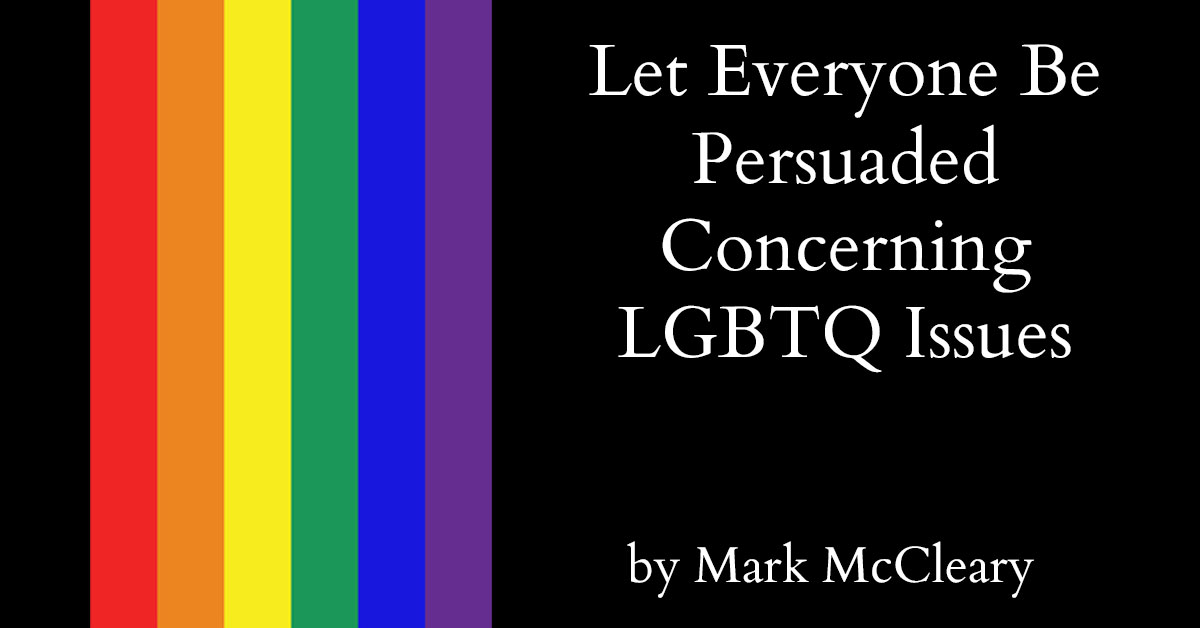 The apostle Paul asserted “Let everyone be persuaded” in the context of controversy about food and days, two Jewish practices that had become matters of contention for newly converted Gentiles (Romans 14:1-5, KJV). Seventh-day Adventists have embraced these two issues as important religious practices. The matters of food and time, while fundamental to human and religious life are matters of identity and being. But so are lesbian, gay, bi-sexual, transgender, and queer (LGBTQ) matters of identity and being.

The television game show, What’s My Line? was on CBS from 1950-1967, and won three Emmys and a Golden Globe. Panelists questioned contestants to discern who they were, their occupation or social contribution. It asked questions of identity and being, issues that prompt self and social reflection. LGBTQ issues are like “What’s My Line?” in that people are challenged to ask questions of identity and being.

Noam Chomsky and other diachronic analysts say that language and culture changes over time. This real-time process is rife with tension and struggle for meaning as conservatives and post-modernists deal with change in identity and social life. For over 20 years, America has been deciding and re-examining same-sex behavior and policies. In the last few years, bathroom debates have added fuel to identity terms such as “gender neutral” or “all gender.” Sexual orientation has been studied since the 1940’s, when Alfred Kinsey used a scale that asked respondents to mark either “0” (heterosexual) or “G” (homosexual). All of this indicates changing thoughts around identity and being in the larger social marketplace.

I remind Adventist Today readers that social change has been a fight. It is becoming common to be non-conforming. For many, gender identity means a sense of self. Yet words are pictorial symbols of subjective expression concerning gender secularization, and expectation by means of dress, style, or oral and written commentary.

Time, March 27, 2017 included an article by Kathy Steinmetz called “Infinite Identities.” According to Steinmetz, LGBTQ discourse includes new terminology for identity and being, such as “pansexual,” “agender,” or “genderfluid.” The following are some of the ideas captured in her article. “Gender is over!” (printed on a shirt sold by an online entrepreneur); “Is it biology or nurture?” asked an undergraduate student; while a high school senior stated, “I would rather be me than fit into a box”; another quote was, “[identity] is fluid or changeable”; an “agender” person said, “You build up to saying this is me, but it takes practice”; and a “genderfluid” person stated, “Some days I feel like my gender could be what I was assigned at birth, but some days I feel the opposite way.”

These poignant testimonies about identity and being are challenging the nomenclature of Gay or Straight. This is increasingly becoming a political football. A third gender bill was presented in California in January 2017, the focus of which was on identity being non-binary. The juggernaut of self-reporting is putting pressure on our thinking and social interaction. Terms like “gender queer”, “non-binary”, “gender variant”, “genderless”, or “pan-gender” are being added to the social thesaurus as actors attempt to persuade others concerning identity and being.

What Does the Church Say?

In a time of greater awareness of intersex physiology and psychological uncertainty, Wesleyans have a strong biblical and theological basis concerning identity and being. They are aware of scientific conclusions concerning LGBTQ matters being mental or medical disorders such as gender dysphoria, or “a desire to be another sex and a persistent distress and discontent with one’s natural body.”

The Wesleyan response to these matters is best understood by reading its Disciplines of the Wesleyan Church (Wesleyan Publishing House, 2012). Discipline 222 on “Marriage and the family” affirms mankind being created in God’s image. There are several other disciplines that might be cited, but I chose this one because it best expressed the Wesleyan vision for humanity of holiness, that in the words of John Wesley, means “faith that works by love.” Wesleyans espouse mankind having been designed for sexuality and monogamy. Furthermore, this emphasizes gender difference as a sacred gift and anything that distorts marriage and family values as violating Divine law and love.

This summary was gleaned from a 2014 publication from a Southern Baptist affiliate in Baltimore, Maryland. As an official statement, it is punctuated with multiple “whereas” clauses. According to this publication, Southern Baptist believe and promote that human beings comprise two distinct and complementary sexes created in God’s image; sin has marred that image with brokenness and distortions such as transgender and psychological ambiguities or culturally crafted gender fluidity that conflicts Biblical principles and values. The conclusion from this is a resolution—physiological-gender reality should be confessed, love should be encouraged to all, the gospel of restitution should be promoted and presented, there should be clear yet tactful opposition to body alterations published, as well as cogent rebuttals provided in response to cultural misinformation.

I am a Seventh-day Adventist by family, church affiliation, and over 39 years of pastoral ministry. I gleaned this section from an article published by Human Rights Campaign (see bibliography) that reported on the Adventist stance on this topic. I surfed their website and found little self-disclosure other than promoting itself as a non-profit organization for equality and soliciting donations. After reading the article, I felt comfortable sharing its salient summations as reflective of the SDA stance on these issues. I felt this approach might position me more objectively since I am the author of this article.

Like the two previous religious voices, Adventists confess the infallibility of the Bible and honoring God’s creation. These confessions are prominent within the 28 Fundamental Beliefs of the Adventist church. While Adventists should practice inclusion, the church is strongly opposed to sexual misbehavior of all types, including same sex marriage. In conclusion, the church’s position is that homosexuality is an expression of broken humanity resulting from man’s fall. The Adventist church strongly encourage compassion toward members and whomsoever is involved in these sinful attitudes and behaviors.

As I write this article, a female Adventist pastor, Alicia Johnson, resigned because after examining the LGBTQ matters from all perspectives, including the Bible and theology, she chose not to hide her bisexuality or condemn same sex relationships or other identity expressions referred to by the LGBTQ acrostic (Spectrum, April 22, 2017 and NBC News, May 2, 2017; Adventist Today).

LGBTQ issues have been around a long time. As a baby boomer, I notice there are more appeals for compassion toward anyone expressing any of these “abnormal” identity matters. The religious voices summarized in this article reflect their understanding of biblical and theological discourse.

Although much space was not given to detailed commentaries from scientific and political sectors, their influence on implementing policies around LGBTQ issues is inferred. My conviction is that LGBTQ matters are complex and variegated. They call for compassionate listening over judgment, without knowledge of all things related to a situation. This reasoning implies that LGBTQ might be a generic heading for these issues, but individual expressions of them need application of individualized listening in the context of specific cases.

I recommend more patience and listening to science and governing leaders who have an egalitarian and non-partisan platform, and who respect the moral arch within social history. I also recommend that readers reflect on holistic data sources that seek objective deciphering of these complex phenomena then publish their thinking so society can learn as it seeks to live better in a flawed social environment. So, Lord, help us to listen better so understanding is attained and issues can be resolved and punitive reactions are minimized or eliminated.

Finally, I recommend that during this era of non-traditional identity expression that you reflect on the prophet Amos’ query: “Can two walk together except they be agreed?” (Amos 3:3). “Two” indicates difference; “walk” infers a voluntary mode of travel and style; “together” and “agreed” indicate unity and negotiated understanding. Through Amos, God encourages His people to walk together and learn to agree. So, walk in your persuasion, look and listen with other, and as you walk I pray that both of you and me will learn, unlearn, and relearn God’s truth concerning self, humility, and love as we pilgrimage in time, until one day we live eternally.

“A Wesleyan View of Gender: Identity and Expression,” www.wesleyan.org/2275/a-wesleyan- view-of-gender-identity-and-expression.