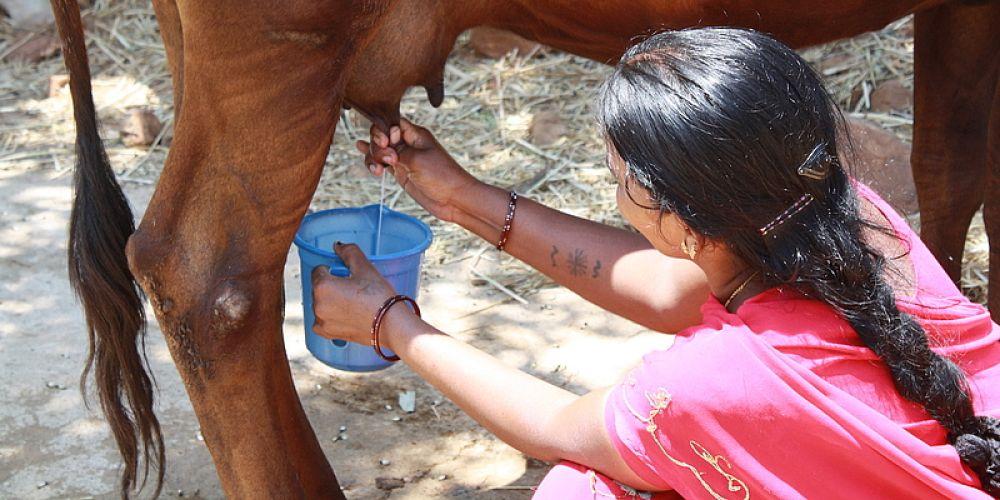 We recently posted a story on the Enactus team at Southwestern; here is a great one from La Sierra, whose team placed #2 nationally https://lasierra.edu/article/la-sierra-university-enactus-team-second-in-nation-at-us-competition/ this year. You may have read a shorter form of this article in the Review.

Ms. Martin Tucker gave AT permission to post the longer one she wrote for the college’s website. Read to the bottom; there’s a lot more than a cow story here, and it’s just right for Mother’s Day weekend! DLK

In the village of Denkanikottai, Tamil Nadu, India, women in brightly colored saris awaken before dawn, desperate to find small jobs earning less than $2 per day.

Among them, however, a group of 117 particularly vulnerable women have been using a far more lucrative and consistent way to make money. In fact they are achieving an income that is 200-300 percent greater than their previous earnings through a micro-lending program set up in 2013 by La Sierra University’s Enactus team as part of its 10-year India Field Station project.

Called a Cow Bank, the program was first initiated for divorced and widowed women and combines agriculture, finance, marketing, and business management. Through a fundraising link on their Enactus website and other activities, the La Sierra team raises money to purchase milk cows in India at $500 per cow. The team then loans the cows to the village women, who in turn take care of the animals, milk them, and sell the milk twice a day to local milk societies with whom the team establishes partnerships and guarantees of fair payment.

The women make payments on the cow loan from a portion of the milk sales and pay off the loan over a year and a half. The team pays for initial veterinarian services for the cows and the women pay insurance to protect their investments and the team’s loan. The team reinvests the loan payments toward the purchase of additional milk cows.

The team purchased and loaned 62 cows to the village women and their families over the first three years of the project. During a spring break trip this March to the Indian village, the Enactus students purchased another 55 cows, 40 with donations, and another 15 with repayment funds from the Cow Bank participants. The pool of bovine owners was also broadened to include day laborers and families systemically trapped in poverty. Participants this year included a family of three children whose parents are stricken with HIV.

“With the Cow Bank, we [focused] on empowering women who are left at a severe disadvantage, because they are often left without any way to provide for themselves or their families,” said James Landenberger, Enactus team member and a business major. “This is the livelihood gap that we are addressing. We currently have a 100 percent repayment rate on our loans.”

During this year’s trip, the students also provided villagers with 150 saplings, mainly pomegranate trees, allowing them to develop a future sustainable food source.

Enactus, previously known as Students in Free Enterprise, is an international nonprofit based in Springfield, Mo. The organization brings together corporate leaders and higher education institutions in 36 countries toward facilitating entrepreneurial empowerment projects and sustainable development aimed at changing communities. More than 70,000 students around the world participate in creating such projects and compete once a year in national and international events.

The La Sierra Enactus team, celebrating its 25th year, is recognized as one of the highest achieving teams in the organization’s history with six national trophies and two world cups. Last year’s team placed second in the United States during national competitions in St. Louis, Mo.

The success of the Cow Bank is leading the La Sierra team to explore other ways of empowering the villagers in Denkanikottai. Upon discovering a high demand in the region for sewing skills, the team established a sewing school last year. This year, the team observed the progress made over the past months. A group of women and girls ages 16 – 23 are in their fourth of a six-month program in which they are learning to sew basic garments and acquiring advanced sewing skills. The participants will each receive a sewing machine through a micro-loan system similar to the Cow Bank, and will provide sewing services in local factories and villages.

“One common response was that they were nothing, but now with the training they can make an income and also bring pride to their village and themselves,” said Andrew Parker, a business major at La Sierra University and Enactus India Field Station director.

“This project is what we are going to be focusing on as we move into the next phase of the India Field Station. We are currently working on raising funds for this project so that we can grow far beyond this initial class of sewing students,” said Landenberger.

Parker said that the work with the people of Denkanikottai has turned around his worldview as well as his notion of Seventh-day Adventist outreach.

“This project has changed my perspective on what ministry is. This project has brought me closer what it is to be a Christian,” Parker said. “ [It] has made me work harder and be more thankful for every blessing that I have.”

Added Landenberger, “The students who have put the work into the India Field Station are the ones who are helping to make this change happen. Ideas like the Cow Bank, the sewing project and much more have come from them. Their creativity, innovation, and entrepreneurship are creating lasting results in places like Denkanikottai.”