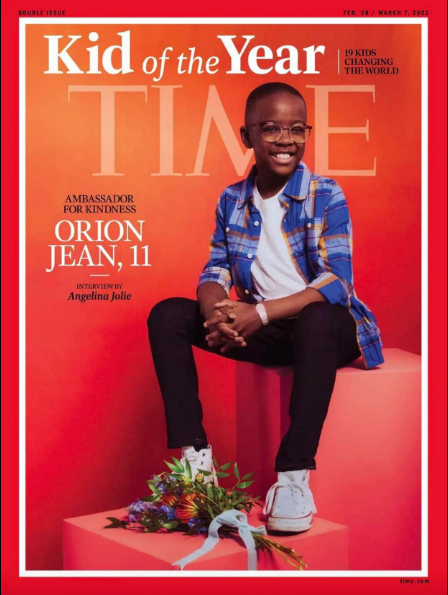 So said Orion Jean when he was 9 years old, in his winning speech for the 2020 “National Kindness Speech Contest.”

And boy, has he been willing!


In two years, through his Race to Kindness initiative, Jean organized a food drive that distributed more than 100,000 meals to needy families across the country. He also organized a book drive that gifted 500,000 books to students with little to no access to literature last year, according to the Houston Chronicle.

“I used the things that I saw on the news every day,” Jean said in an ABC7 news article. “People losing their jobs and their homes and access to food and books and clothing—things we sometimes can take for granted, and with a little bit of kindness, we can hopefully give back those things.”

His efforts have received local and national attention—including an appearance on The Ellen DeGeneres Show—and inspired brands such as Melissa & Doug, Chobani, Scholastic, and even Disney, to increase the reach of his story.

Now, the 11-year-old, who is a member of the Dallas City Temple Seventh-day Adventist Church in Texas, U.S., has been named TIME magazine’s 2021 “Kid of the Year.”

According to TIME magazine, a U.S. nationwide search is done in which parents, teachers, and friends can nominate a kid age 8 to 16 who is helping to make the world a better place. This year saw thousands of submissions, but the panelists that selected Jean saw something especially inspiring in him.

“Orion not only launches big efforts to fix problems he sees in everyday life, like food insecurity and lack of access to education. He also inspires others to join him, bringing local communities and governments together to help the neediest among us,” said the TIME article.

But to Jean, kindness can be small and simple.