Kenya: Adventist Re-Elected, Sworn in as Governor in Migori County 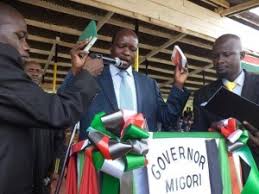 By Tysan, August 25, 2017:      Governor Zachary O. Obado was re-elected in the election early this month in Migori County, Kenya, and sworn in for the new term earlier this week. He has served as governor since the county level of government was introduced and is known as a faithful member of his local Seventh-day Adventist Church where. He has found time to serve as a local elder, a youth ministries leader and sing in the choir.

Obado’s success as a politician is attested to by the fact that he left the Orange Democratic Movement (ODM) some time ago when he lost a primary election, but was elected governor despite the disappointing primary and is the only non-ODM governor in Luo Nyanza’s four counties and the two neighboring counties of Kissi and Nyamira. He successfully works with ODM elected officials despite being outside the party and demonstrates that a less partisan approach will work in Kenya. He also coordinates with Jubilee Party officials and is uncomfortable with the perception that the relationship between governments should be adversarial.

Pastor Bernie Ngore, president of the Adventist denomination’s local Ranen Conference, led a dedication session as part of Obado’s swearing-in ceremonies that included clergy from other denominations. An Adventist choir also sang a song entitled “Jesus Love” during the event.

Although the Adventist Church in Kenya stays away of direct involvement in political campaigns, some members supported Obado as inidividuals, especially when an opponent urged Catholics to vote against him and accused him of allowing the government to take land from Catholic institutions. “How could we forsake one of our own when the battle took religious ground?” asked a local elder interviewed by Adventist Today.

In fact, another Adventist who holds elected office in the same county, Senator Wilfred Machage has accused Governor Obado of failing to accommodate all ethnic groups during his first five-year term in office.

A large number of other governors, Senators and Members of Parliament (MPs) were sworn in this week or are scheduled to be in the near future. Adventist Today is seeking to find out which of these are Adventists and will report on them as our reporter is able to dig out the information and interview at least some of the individuals.

Across Kenya, everyone is aware that the Supreme Court has 14 days from August 18 to examine the evidence and rule on the petition that seeks to set aside the re-election of President Uhuru Kenyatta because of what is allegedly a rigged voting process. Chief Justice David Maraga has a key role in this and, as reported by Adventist Today earlier this week, he happens to be an Adventist.

Maraga has had nothing to say publicly at this point, although many other figures are speaking out. Senator Yusuf Haji from Garissa County has challenged the opposition candidate, Raila Odinga, to be ready to accept any outcome. Godfrey Migwi, a well-known preacher from the House of Hope in Kayole has criticized David Ndii, the Odinga adivsor who has started a petition to split Kenya into two nations, as Adventist Today reported yesterday. “We need to do away with this nonsense,” Migwi said of the petition. “We have one Kenya, 45-plus million lives, 44 tribes and … one person or two cannot be allowed to divide Kenyan’s for their own selfish interested and their thirst to get power.”

Adventist Today urges our readers to pray for peace and justice in Kenya during this time of crisis. If you have questions or information for the reporter we have in the country, please send an Email to atoday@atoday.org and type “Kenya” in the subject line.