It’s Time for Adventist Women to Speak Up 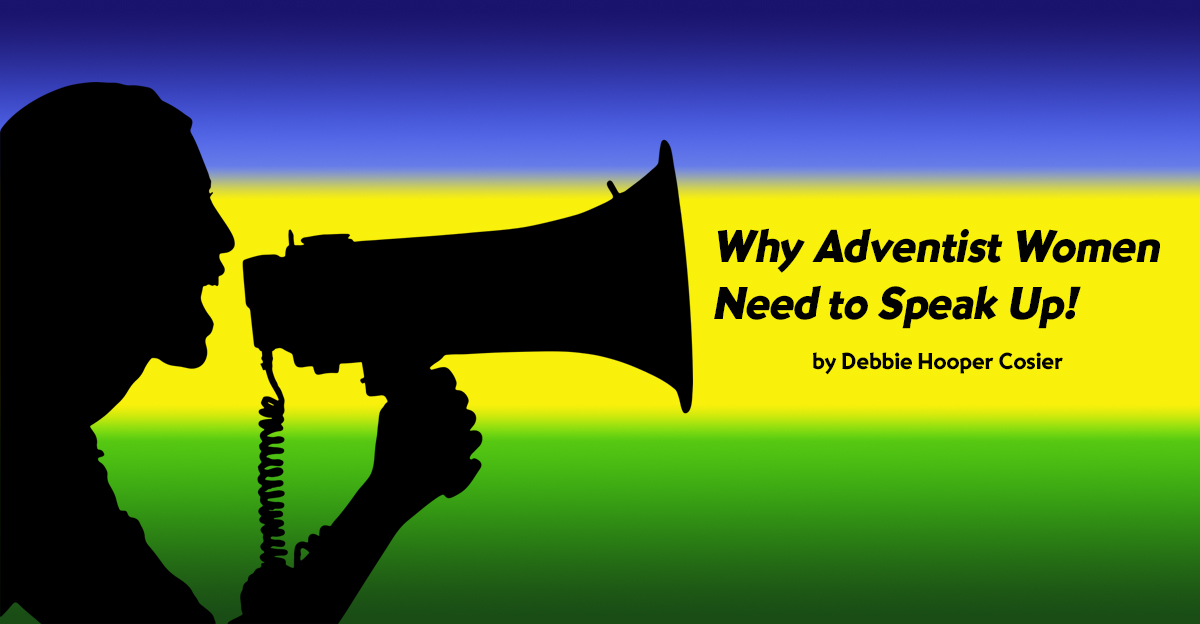 The most significant topic to come out of the General Conference Autumn Council for many of us was the censure of North American and European union conference leaders. Because of their policies supporting equal treatment of females in ministry, David Weigley, Ricardo Graham, Johannes Naether, Bobby Sjolander, Thomas Müller, and Victor Marley received a warning as the first step in disciplinary action.

In Australia, message apps and back rooms have been buzzing with conversations between women who feel great admiration for those leaders, and anger over the direction the General Conference is taking.

Yet from the outside, you would hardly know it.

I judge mainly from the one place that thrives on opinion: Adventist forums on social media. While there are some notable exceptions, my observation is that Adventist women are mostly quiet.

In an eloquent letter to Australian and South Pacific Adventist leaders, Neroli Dobson broke her silence about her years of patient waiting, trusting, hoping that things would change. “There comes a time when silence becomes betrayal,” she says, quoting Martin Luther King in the opening lines of her letter.

A vocal male supporter of women’s ordination commented on the lack of reaction from Adventist women, bemoaning

“…the enabling ‘support’ those ‘men’ receive by the silence of liberal adventist women.

“They [liberal Adventist women] speak of change coming and wistfully long for equality. However, apart from some ‘oh, but look what we’ve done over here. And ‘can’t you see this positive outcome over there?’ they collectively do nothing.

“Some even try to shame and ostracise those who do speak up by saying ‘oh, you just have an axe to grind. Why are you attacking our church?’ And don’t get me started on the gutless liberal entitled beta male inaction and silence, lol.”

Is the silence of women a betrayal—a deliberate enabling of continued injustice, as the commenter says?

I think there may be something else at work.

What struck me most while watching the Autumn Council on live feed was the observance of a strict two-minute time limit and the subdued, restrained manner employed by every speaker who rose to defend equality for female ministers. To me, their level of control spoke volumes about a culture of suppression imposed on people who disagree.

Generations of church goers have been taught that feelings are dangerous. Yet my experience is that ignoring emotion is equally dangerous, and that a human being breaks if they cannot emote when they are deeply wounded, or not being heard.

Women (particularly in the case of women’s ordination) are especially curtailed by this church culture. If a female minister doesn’t exercise a high level of decorum, she is used as an example for why women are not suitable for leadership. She may lose her career entirely. This leaves a narrow margin for suitable expression, and results in highly edited and controlled statements such as this one, issued in response to the Autumn Council by a Facebook group of nearly 400 members for female Seventh-day Adventist pastors. The constraint forced on women keeps them unable and unwilling to create a stir, and masks the truth and pain beneath the surface.

And, it allows the church to turn away without too much discomfort.

“Nothing to learn from these people”

When people have certainty that their personal belief system is “the truth,” they feel a great sense of security and stability. However, they can also become black-and-white thinkers, discounting influence and experience from outside sources if it doesn’t fit within a very narrow band.

Think of Westboro Baptist Church. Believing they had the one true way and that others were deceived by Satan, they felt justified in their actions. Megan Phelps-Roper was just a child when she began picketing funerals of US soldiers and celebrated when Princess Diana died because of her work bringing awareness and empathy to victims of the AIDS epidemic. In Phelps-Roper’s memoir Unfollow, she says that black-and-white thinking is destructive because there’s “the danger of becoming calcified in a position and impervious to change.”

Whenever someone objected to their behavior and pointed out different theology, Westboro Baptist Church members would tell themselves they had “nothing to learn from these people.” They expelled and demonized people from their ranks who began to question them, which is what eventually happened to Phelps-Roper in her mid 20s. She talks about how her own zeal silenced her doubt for many years. She was unmoved by the pain she inflicted with her poisonous chants and picket signs, because she believed WBC was “right,” and this was the best way to show how wrong others were.

By turning its back on dissenters, Adventism also calcifies into a position of harm. Denying the legitimacy of equality for women because a Bible verse reads a particular way or because the issue is moralized as “…a secular push driven by worldly spirits. A proverbial minefield that includes homosexuality and gender confusion. Potentially corrupting our church and undoubtedly others” (Facebook comment, November 11, 2019). Such attitudes rob women of agency, language and rational argument to convey their experience of sexism and misogyny in the church.

Because it almost appears to me, sometimes, that we women feel our role is to look to others for the right answer.

The church has taught us from the time we were little that our hearts can be deceived and our thoughts hijacked by the devil. As a result, many of us distrust ourselves and feel a deep inferiority when it comes to understanding scripture. We would rather not enter debate than make a mistake or reveal our ignorance. It’s safer to yield to the judgment of others. “Trust and obey,” says the voice in our heads. So, more often than not, we remain silent.

Added to this is that women lose their right to a voice as they grow older. As a young female teacher I was asked to preach sermons, lead out in youth ministry, be creatively involved in worship programs. After becoming a parent (just like my husband), I was asked to do children’s Sabbath School and food preparation—worthy, but predominantly nurturing roles.

Why don’t we say, “Hey, why don’t you value my input, my thoughts?” Perhaps it’s because of our self-doubt. Perhaps it’s because church is where we all serve and we think it would be arrogant and unseemly of us to put up our hand for roles we are not invited to do. If someone plucks up the courage to say, “I want to play a different role from the one you’ve assigned me,” we sense that this is somehow against the rules.

Why don’t Adventist women speak up? The time has come. We’ve been observing and learning an awful lot while we’ve been silent. Now, we don’t just have some valuable things to say; we’re ready for leadership.

Debbie Hooper Cosier is a former teacher, now a content writer, who lives with her husband, Barry, and sons, Jamie and Braden, in the Tweed Valley in northern New South Wales, Australia. Her website is freshwriting.com.au.