Is the Author Serious?: The Truth, The Whole Truth, and Nothing But the Truth? A Commentary.

commentary by Ervin Taylor, February 25, 2015:     A book written by a well-known Adventist author but printed by a less-than-well-known (at least in North America) Adventist publishing house, carries the title, The Truth, The Whole Truth, and Nothing But the Truth. 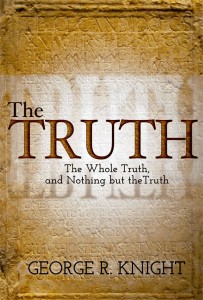 No, this is not a typo. It is actually the title of this book. One rarely sees such a title – even for Adventist evangelistic books ‒ since it exhibits such a gross lack of theological modesty, bordering on such unmitigated religious arrogance that I first thought that someone was playing a joke and whoever authorized the printing of the book missed the humor. My second thought was, well, perhaps a book with such a title would have been authored by someone like Doug Batchelor or the late Joe Cruz, both of the Amazing Myths organization.

Although the copyright date is October 2012, it appears that this volume was not placed on sale at various retail Adventist Book Centers in North America until late 2015. Perhaps this book did not get onto the publication lists in North America until recently. One wonders if the apparent delay may have something to do with the publisher, the Inter-American Division, or perhaps because it was printed in Mexico.

At least to this commentator, there are two things that are very surprising about this book. The first is the arrogant title. The second surprise is the author, Dr. George Knight, a retired professor from the Adventist Theological Seminary at Andrews University. Although Dr. Knight was not trained as a historian, he is the prolific Adventist writer of articles, chapters, and books on Adventist history. His Ph.D. is in educational philosophy from the University of Houston. He is a convert to the Adventist Church – actually he is a double convert. He joined the Church, attended the Adventist seminary and became a clergyperson. He left the pastorate and the Church for a time. During the time he was “out of the truth,” he obtained his Ph.D. He then rejoined the Church and was appointed first to a faculty position at Andrews University in the School of Education, and then he moved over to the Seventh-day Adventist Theological Seminary and continued his career, teaching Adventist history at the Seminary until his recent retirement. All of this information is contained in a recently published Festschrift, entitled Adventist Maverick.

On the other hand, Knight’s book contains a number of colorful graphics, many creatively produced. The layout artist is identified only as “DMG.” I’m not sure if that is someone’s initials or the name of a company. The cover is also an interesting one and the cover design person should be congratulated for a creative product.

The text of The Truth, The Whole Truth, etc. book begins with a familiar English translation of 1 Timothy 3:16: “All Scripture is given by inspiration of God.” I hope that the author or whoever inserted that quotation into this book is aware that the “All Scripture” reference only pertains to what Christians call the Old Testament. This is because the collection of works that we call the New Testament did not as yet exist. Since 1 Timothy was written in Greek, in referring to “all Scripture,” whoever wrote this letter was probably thinking of the Greek translation of the Old Testament, the Septuagint, which included what we often call the Apocrypha or Deuterocanonical books.

These books include 1st and 2nd Maccabees. If you are an orthodox Adventist, this would be appropriate, since Ellen White approved of the use of 1st Maccabees as a source of inspired information. By the way, the consensus of scholarship is that Paul the Apostle, the author of the book of Romans, wrote neither 1 Timothy nor 2 Timothy. Both of these letters were probably penned late in the 1st Century or early in the 2nd Century AD by someone who had been influenced by Paul, knew his background and wished to combat Gnosticism. Since Gnosticism did not become a problem for Christianity until late in the 1st Century, this is one piece of evidence that Paul did not write this letter. The point is that he (it was certainly not a “she”) thought that the Old Testament Scriptures were all “breathed” upon by God and therefore were “profitable for doctrine, for reproof, for correction, [and] instruction in righteousness.”

So much for which books of the Bible are inspired. Let us return to the “The Truth, etc.” book. It contains 22 chapters. The preface indicates that these chapters had originally been individual articles in a journal entitled Priorities, published in Spanish, English, and French by the Inter-American Division of Seventh-day Adventists. The title of the series of 22 articles in that journal was, “What the Bible Says About . . .” We will not comment on all of the chapters, but consider just four of them to see if we can get the flavor of the approach taken by the author as he talks about “Truth.”

Dr. Knight says that “the aim of The Truth, The Whole Truth, and Nothing but the Truth is to briefly explain the Bible’s major themes in a manner that is both clear and brief.” He likes to use the words “clear” and “plain” when referring to understanding the Bible. That might explain some of his views. I will quote some of the author’s statements and then offer some comments which are in bold in parenthesis.

Chapter 1 declares that the “Bible reveals truths that we couldn’t possibly know except through God’s revelation.” However, “it leaves most questions unanswered.” It is insisted that “All too often we bring our ideas to the Bible and find a few passages to support our biases . . . We need to get our ideas of spiritual realities and truths from Bible study rather than imposing our views onto God’s work.” (Comment: Excellent idea, but when there are major differences of opinion about what exactly are “Bible truths,” what do we do then?)

Chapter 2 addresses the nature of Jesus. Dr. Knight states that Jesus is “not only the center of the Bible and history, He is also bridge between the God the Father and the human race. His unique divine/human nature did not come about by accident. That thought brings us to the question of why Jesus became human, a topic on which the Bible is very clear.” (Comment: If it is so very clear, why are there endless theological debates about the topic? There is always the interesting idea that Jesus is both 100% human and 100% divine. If someone could explain that idea clearly, we should all be grateful. Dr. Knight does not deal with that.)

Chapter 3 is entitled “Creation or Evolution?” Dr. Knight begins with the comment that he does not “have enough faith to be an atheist. . . (Comment: relevance?) For the first nineteen years of my life, I was not a Christian or a believer in any religion. (Comment: relevance?) My teachers tried to explain how things just happened throughout ceaseless ages of evolution. (Comment: We can assume that this is in science classes in a public school. We can be reasonably sure that they did not explain that things “just happened.”) But even as a teenager I know that something does not come out of nothing, that intelligence does not flow out of ignorance, and that order is not the child of chaos. I might have been gullible about some things, but I was not that gullible (his emphasis). (Comment: The question of gullibility is raised . . . that’s an interesting question. We might have a difference of opinion about who the real gullible individual is.)

Chapter 10 is entitled “A Weekly Gift from Jesus” which is, of course, addressing the topic of the Sabbath. In a section of that chapter entitled “The Change of the Sabbath,” Dr. Knight notes that “While the misunderstanding of certain Bible texts is related to the change of the Sabbath, even more to the point is Daniel 7:25, which plainly teaches that a power would arise which would attempt to change God’s law, especially as it related to time: “He shall speak pompous words against the Most High, shall persecute the saints of the Most High, and shall  intend to change times and law. With that prophecy in mind, it is of interest that the only entity that historically has claimed the authority to change the Sabbath has been the Roman Catholic Church. Thus the Convert’s Catechism of Catholic Doctrine, after noting that the biblical Sabbath is Saturday, goes on to claim, “we observe Sunday instead of Saturday because the Catholic Church transferred the solemnity from Saturday to Sunday (1957 ed[ition], p. 50). (Comment: It is a great disappointment that Dr. Knight, someone who has worked with primary historical materials dealing with the history of Adventism, simply repeats the totally false canard that “The Catholic Church changed Sabbath to Sunday.” This is simply factually incorrect. The catechism text quoted is simply wrong.)

The change from Sabbath to Sunday as the Christian day of worship began about a century after the death of Jesus, centuries before the Roman Catholic Church as an institution existed. This is not the place to recount how and why it happened. But it might be pointed out that an Adventist scholar who was no liberal and who was a colleague of Dr. Knight at the Adventist Theological Seminary at Andrews University, Dr. Samuele Bacchiocchi, published in 1977 a book entitled From Sabbath to Sunday: A Historical Investigation of the Rise of Sunday Observance in Early Christianity.

This work set out what the historical evidence actually says about how, when and why this transition took place. The Roman Catholic Church as such had little to do with the change. Dr. Bacchiocchi’s book was based on his dissertation in Italian submitted to a well-known Roman Catholic institution, the Pontifical Gregorian University in Rome. One might think that if authorities in the Roman Catholic Church wanted to claim responsibility for the change, they would have expressed some concern about the conclusion of this dissertation.

Parenthetically, most serious scholars not beholden to some denominational tradition view the “power” that is noted in Daniel 7:25 as actually referring to a 2nd Century BC Syrian king, Antiochus IV Epiphanes. But let’s not belabor this point.

In conclusion, there are certainly some helpful comments in this book but, in the view of this commentator, the positive materials are almost totally overwhelmed by the entire spirit of this volume, which makes no attempt to treat all of the conventional 19th century Adventist theological traditions in any light except that they are The Truth, The Whole Truth, and Nothing but the Truth. That’s very sad. One possible conclusion one might draw is that Dr. Knight wants his legacy to be remembered as consisting of this kind of simplistic apologetic literature rather than his more substantive historical writings. Or perhaps he wishes works such as this to provide atonement for some of his earlier treatments of Adventist history that laid out some of the problematic aspects of Adventist orthodoxy.

In my last commentary, I noted that Dr. Knight had, in 2009, published The Apocalyptic Vision and the Neutering of Adventism. In that book, he argued that if modern Adventism does not emphasize its classic prophetic interpretations and apocalyptic message, it might as well disband. To again quote Dr. Knight, “If Adventism’s apocalyptic big picture isn’t valid, the most sensible thing is to shut up shop, go home, and do something meaningful with our lives.” I suggest again that this opinion might make sense for a convert to Adventism, but it may not be compelling or persuasive for someone who is a second-, third-, or fourth-generation Adventist.