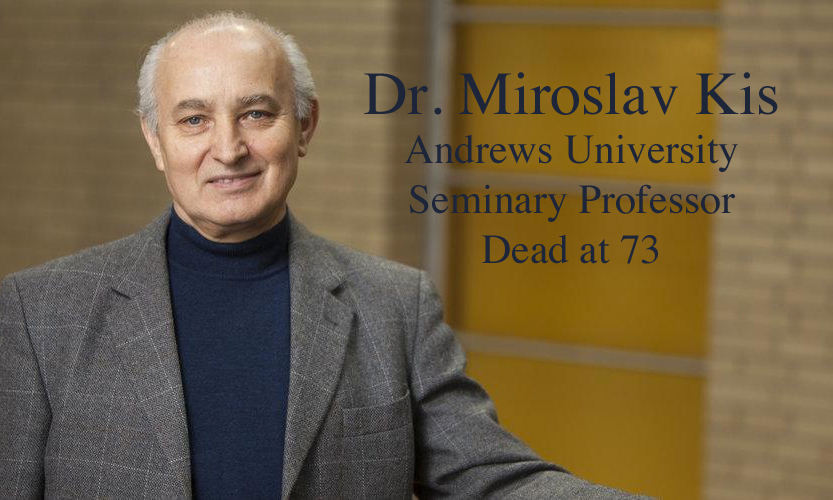 February 24, 2016:    Dr. Miroslav Kis, professor of Christian ethics and long time chair of the department of theology in the Seventh-day Adventist Theological Seminary at Andrews University (AU), died yesterday afternoon from a heart attack, according to an Email bulletin shared with the faculty. He was 73 and retired last summer (June 2015).

“Kis is credited with … working hard to convince General Conference leaders about the need for a standing ethics committee to address complex moral issues facing the denomination,” reported the Adventist Review. He served as a key member of the committee since its formation and was widely respected among other Adventist ethics scholars.

He wrote Follow Me: How to Walk with Jesus Every Day, originally published by the Review & Herald Publishing House in 2001 and reissued by Pacific Press last year. He also wrote at least 15 scholarly papers on sexuality, Bible interpretation, contemporary moral issues and the moral authority of the Bible. They are available for download on the Web at https://works.bepress.com/miroslav_kis/,

“He was a giant of biblical, theological, ethical interpretation,” Dr. Jiri Muskala, seminary dean at AU, told the Adventist Review. “He was not driven by popularity but by biblical and theological truth. Many students benefited not only from his teaching but especially from his clear attitude toward the Bible, because the Word of God was for him the highest authority and orientation point in all discussions and his life.”

As a young man, Kis was trained as a watchmaker in what was then Yugoslavia. He graduated from the Adventist seminary in France in 1973 and received the Master of Divinity degree from AU three years later. He served as a pastor in California and in Quebec, and completed a PhD in philosophical ethics at McGill University in Montreal before joining the AU seminary faculty in 1983.

Kis is survived by his wife Brenda who worked for Adventist Frontier Missions at the organization’s headquarters near the AU campus until she retired last summer. He is also survived by two sons, their wives and three grandchildren. Andrej Kis works in the academic records office at AU. Adam Kis is an assistant professor of anthropology at Burman University, the Adventist institution of higher education in Canada.