Can a Repentant Abuser Be Trusted? 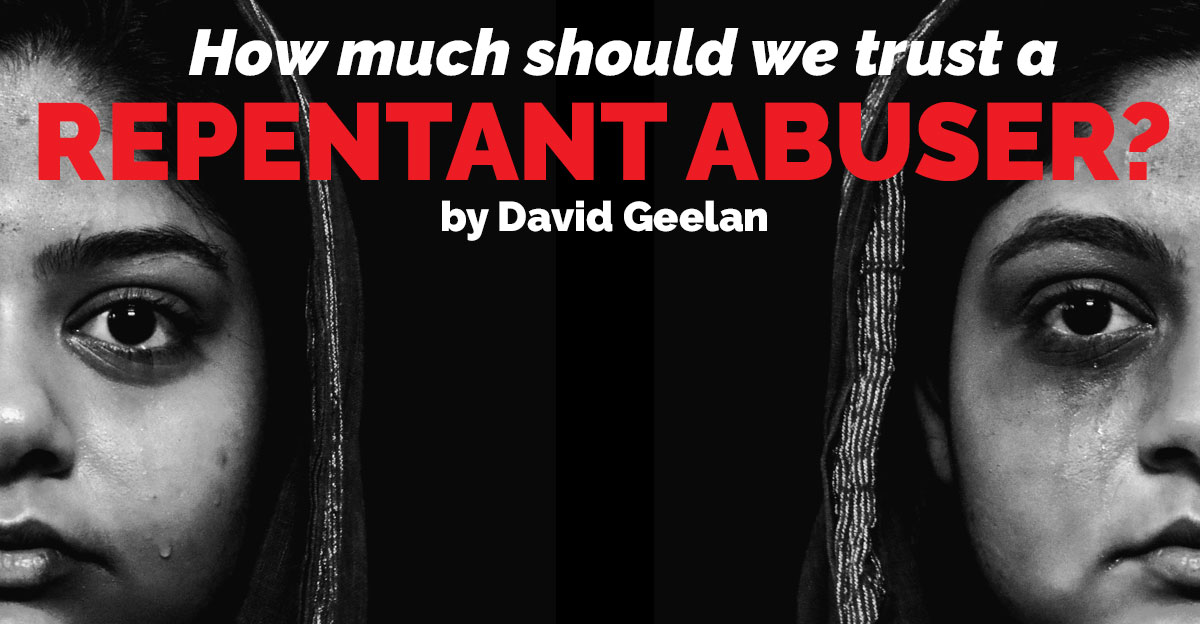 My last essay on the Adventist Today website was about ‘cancel culture’, free speech and whether all views deserve a platform everywhere. I argued that some views, while they shouldn’t be suppressed by government action, also should not be given a megaphone.

This time, let’s go beyond ideas to actions. What do we do with someone who has actually harmed others, and is there a path to redemption for such people? And does redemption imply reintegration into society with the full rights accorded to someone who has never done this sort of harm?

I’m thinking particularly of the harm caused by abuse: physical, spiritual, sexual, or emotional. When someone has used their physical or institutional power to cause harm to those with less power, what do we do with that person in future? (I am less concerned here with financial corruption and embezzlement, although of course those activities do deprive an organization of resources that may have been devoted to helping vulnerable people.)

On one hand, I hope there is always a path to redemption, because I need one! While I have not been an abuser, I have made mistakes, and chosen selfishly and needed a way back into community after those actions. From a Christian perspective, we do not believe that a single action, or even a pattern of actions, forever precludes repentance, forgiveness, and redemption.

On the other hand, though, a too-quick extension of forgiveness and reintegration into the community has had devastating consequences in churches, corporations, and schools, as “repentant, reformed” abusers in positions of power were moved on to new communities, given a “fresh start” by not informing the new community of their history, then went on to offend again, “repent” again, be moved on again… rinse and repeat and devastate lives for decades. I won’t name names here, but I’m sure you can think of recent and prominent examples in Adventism, while some other denominations have paid out millions in compensation to victims… but cash can never repair the harm.

I know more about this, more personally, than I wish I did. My wife, who has given her consent to share her story (because, as she rightly says, shame falls not on her but on her abuser) was sexually abused by a close family member as a child, in ways that still have severe repercussions for her and our marriage half a century later. The harm goes on, although the abuser is long dead.

So, stipulating for the moment that there is always a way back to reconciliation with God when someone genuinely repents of their abusive sins, what do we do with such people? Bitter experience shows that, far too often, those who have very publicly “repented” have gone on to offend again and again. Jesus pulled no punches: “But whoso shall offend one of these little ones which believe in me, it were better for him that a millstone were hanged about his neck, and that he were drowned in the depth of the sea” (Matt. 18:6).

Presumably that’s not a prescription for what we should actually do to abusers, though sometimes it can be tempting. But it does show how strongly God abhors abuse.

First, I’d say that whether or not a survivor forgives an abuser is a matter for the survivor, not for any of us to pass judgement on. (I’m using the term “survivor” rather than “victim,” as many people who have been abused prefer it.) While we might believe that forgiveness and letting go of the past harm is the best path to healing, what we don’t and can’t know is the pain of the present and future harm: the on-going repercussions of the abuse in the life of the survivor. New forgiveness may be needed every day… and the survivor may not yet be ready or able to forgive. External pressure to forgive can be another form of abuse.

Second, redemption does not mean freedom to harm again. Someone who has abused vulnerable people has a higher probability of doing so again. That means precautions need to be put in place to protect others: chaperones, not leaving them alone with potential victims, placing limits on their activities and access, making them accountable. And these measures should be lifelong, since so many cases of abuse we have seen extend across many decades and well into the old age of the abuser.

And the thing is, a genuinely remorseful and repentant abuser will want those safeguards to be in place! Someone who authentically comes to see those abused as whole human beings and fully comes to understand the damage caused and the pain experienced by the survivors of their selfish, evil actions, will never want to act in those ways again. They will recognize their own human weakness and their own particular class of temptations, and will seek the help of the community to overcome so that they never do it again.

That means that, if an abuser has “repented” but seeks to be left alone to have full access to all people including those in groups (age, status, etc.) they have abused in the past—to be fully integrated back into society and the community with all the rights of all other members, that person deserves to have the genuineness of their repentance scrutinized closely.

This is because it seems plausible that they have not fully come to understand the consequences of their actions for others. Rather, they may be “repenting” because they got caught and want to mitigate the consequences for themselves. If they truly cared to understand the harms done, they would be horrified by their own actions, and the fact that those actions and their consequences for the survivors cannot be taken back or undone, and would abhor the possibility of ever behaving in those ways again.

So the road back needs strong guardrails and good signage and barriers to protect the vulnerable cyclists and pedestrians in the other lanes, to stretch a metaphor. And it never leads all the way back to full reinstatement in the community as though the abuse had never happened. That’s a logical consequence of having abused. Such people need to forever be watched with care, especially if they  seek to evade such scrutiny, even in apparently sincere repentance.

We owe nothing less to those they could possibly abuse in future.

Before you go… AT can only publish its unique brand of accessible, independent journalism because of your support. The August 12-21, 2022 AT Spring Fundraiser is ON.

Dr. David Geelan is Sue’s husband and Cassie and Alexandra’s dad. He started out at Avondale College, and is currently Professor and National Head of the School of Education, within the faculty of Education, Philosophy and Theology at the University of Notre Dame in Sydney, Australia.